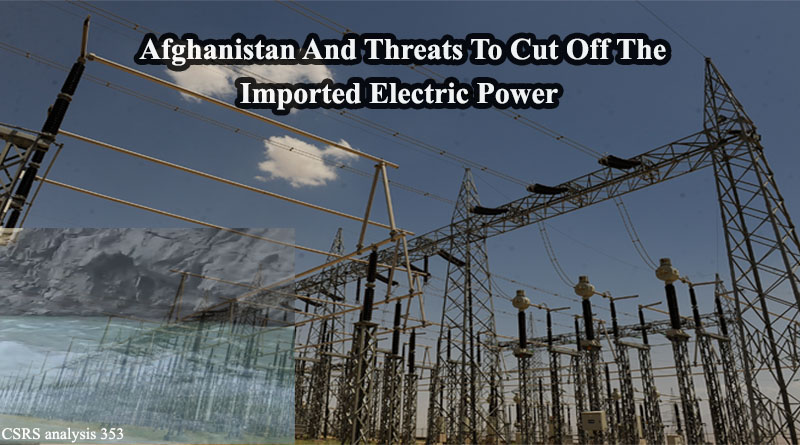 On 26th July, 2020, the Da Afghanistan Breshna sherkat (DABS) startlingly reported that effective 7:30 AM, Tajikistan will reduce the imported electricity supply from 350 MW to 40 MW. As a result, Kabul and some other provinces were severely affect by the cut.

Why investment on electricity production seems little despite numerous foreign aids during the last 2 decades? When will Afghanistan become a self-sustained country by producing its own electricity? For how long will the imported electricity be able to last and satisfy the needs? Here, we discuss these issues.

Imported Electricity; How Long Will it Last?

Afghanistan pays 25 million USD monthly or 300 million USD yearly to Tajikstan, Uzbekistan, and Iran in exchange for their power transmission to Afghanistan. A few days ago, Tajikistan unexpectedly reduced their electric power supply from 350 MW to 40 MW due to their lack of water supply in the country. After Tajikistan’s power cut, the DABS announced that they will import additional 400 MW electricity from Uzbekistan. Similarly, Uzbekistan a few months ago threatened to cut off the power supply unless their expenses are paid in advance. Apparently, to satisfy their own needs and desires, electricity exporting countries can hit the off switch anytime. Whenever they want to, they can deprive 30% of the population of Afghanistan from electricity that currently has access to electric power. Afghanistan has spent millions of dollars to pay the expenses of importing electricity. If those expenses were invested on constructing dams and electricity production projects, more than 30% of the population would have had access to internally produced electricity.

Considering the decrease in foreign aids and poor economic condition of the country, Afghanistan will soon be deprived from electricity due to its inability to pay for the imported electricity.

During the last 2 decades, government officials and DABS have made only empty promises and have failed to construct dams that will be utilized to produce electric power.

The Fundamental Solution is to Build Hydroelectricity Dams

The government has failed to construct dams and reservoirs locally. For instance, construction of Machalgho dam, which was planned to inaugurate in 2011 and should have been accomplished within three years’ period according to the plan, has still been delayed due to corruption and negligence. Later, constructional works of the dam were reinitiated in 2017, for which, a Russian company was contracted to construct the dam. However, the works were unsuccessful for the second time as well. For the third time, the operations unit of the president’s office has been appointed to construct the dam within 16 months. The unit has also promised to accomplish its constructional works within 16 months if security conditions are suitable. With an organized plan, construction of the dam could have been accomplished years ago. But despite spending 1.1 billion AFGs, the dam has still not been constructed and only 7% of its constructional works have been completed.

In addition to Machalgho dam, many other dams and reservoirs have been inaugurated only to show off. However, due to corruption and negligence, their construction has not been accomplished.

If the Afghan government is truly willing to profoundly resolve the electricity issue, it should firstly eliminate corruption that currently exist in utilization of imported electricity. This is because there are many governmental and non-governmental organizations that have not paid their electricity bills since years. As a result, the DABS, in order to focus on local production of electricity, neglects the payments of imported electric power. Subsequently, the Afghan government gets forced to pay the amount from the national budget that has not been collected from organizations due to corruption. Consequently, such doings affect the economic condition of the country, postpone construction of dams and reservoirs, and increase reliability on imported electric power.

On the other hand, the international community should not only financially support electricity production within the country, but should comprehensively monitor its progress and success. In addition, the master plan of electricity that was developed in 2004 should be reviewed, as in spite of numerous foreign funds, it has not been able to efficiently produce electricity within the country. It is a fact that Afghanistan is facing security problems when it comes to construction of dams, But the Afghan government could even have had remarkable achievements by investing on renewable energy. However, because of poor policies and strategies, such innovative steps were not efficiently taken.

What Should Be Done?

If noticed, the government has spent millions on capacity building of Afghan experts. However, foreign experts have had greater role instead of Afghan experts and specialist when it comes to planning and designing for electric power production. According to Mohsin Amin, masters graduate of Oregon State University and expert of energy sector has said that international monetary organizations and The World Bank never agreed to construct Hydroelectricity dams in Afghanistan.

If the government truly intends to boost electricity production within the country and decrease reliability on imported electric power, it should not only construct dams and reservoirs, but establish a security unit that will aim to protect the infrastructure and eliminate corruption. Anti-government bodies should avoid seeking monetary gains in projects that are planned to construct electricity related infrastructure. They should comprehensively support dams’ construction projects. Such actions can expose corrupt individuals who do not want to see a self-reliable Afghanistan.

On the other hand, the government should avoid inauguration of too many dams’ construction projects. As witnessed previously, inauguration of dams’ construction was to show off and campaign for elections or a position. As a result, many projects that were commenced years ago are still incomplete and those dams that were harmed due to war and insecurity have still not been reconstructed. Hence, considering the security and economic conditions, it would be beneficial if only limited number projects are commenced and rapidly accomplished. Also, the public should be motivated to consider the dams as their national treasure and protect them from harms. On the other hand, those who have access to electricity should be encouraged to pay the bills on time, so that expenses of imported electricity can be paid on time.

The government should also step up in order to eliminate corruption and put an end to the embarrassment that is being elicited globally to Afghanistan due to corruption. To boost internal electricity production, Ghazanfar Group has signed an agreement with the World Bank to invest 89 million USD to produce electric power for Mazar-e-Shareef city. Hence, the government should back the private sector and eliminate security challenges for their projects.