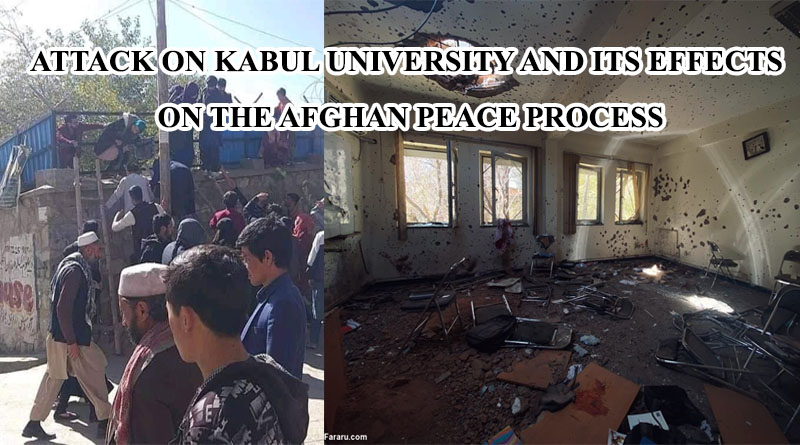 On 2nd November, 2020, three gunmen entered Kabul university and fought gun battle with security forces for four hours. Kabul Police officials have confirmed that 13 policemen have been arrested for negligence regarding the Kabul University attack which left 22 dead and 40 injured. Most of the victims were student of Kabul university.

The outrageous attack on the biggest academic institution of the country has raised many questions. People ask what was the stimulant of the attack? how were the gunmen able to reach the gates of Kabul University with various weapons? And where did deformity occurred in the security system?

A Bitter Experience for University Students

The attacked on Kabul university on 2nd November, 2020 has triggered terror amongst academic establishments and the public. The incident has wounded the hearts of Afghans and has caused great sorrow all over the country. The attack was carried out on the building of law studies where students of two faculties; management and public policy, and law and political sciences were gathered.

Shakila, a 32-year old student of the faculty of policy and public administration is among the survivors of the attack. Although she is alive, but is in shock since she saw her classmates die in front of her eyes. She said “We heard the gunshots around 10:46 AM. It happened when electricity went off and our lecturer was about to end his class. Our lecturer asked us to lay down on the ground. But the shooting intensified and a grenade was thrown to our class. I and a few of my friends were laying on the ground in a corner of our class. Chairs fell down on us and blood of our classmates was all over on our faces. The attackers therefore thought we are dead”.

“I wasn’t sure that I will survive. I repeated the Shahadah many times. I was in an unspeakable condition. I was only praying. Our class was full of dirt and blood. We remained in class for few hours. Then the police came in and pulled us out”. She said.

Shakila’s story is one of the bitter experiences of dozens of students of Kabul university who saw death in front of their eyes. The event will remain in their memories for the rest of their lives.

The attack on students and young generation of the country has caused great sorrow and anger among the citizens of Kabul. It is difficult to comprehend that how can a human cold-bloodedly preform such a horrifying act of terror.

However, Amrullah Saleh, First Vice President of Afghanistan has proclaimed that the statement of ISIS is fake since the weapons found with assailants do not match the picture of ISIS. Referring to flag of the Taliban which was apparently found in the scene, he claims that the Taliban are responsible for the attack, not ISIS.

A video of apparently of ISIS militants with covered faces which deny responsibility and blame the government for the attack makes the issue more equivocal. Experts say that the video is fake. It is still unclear that If the Taliban were striving to carry out the attack anonymously, why would they take their flag to the scene? A proclamation of the Taliban has condemned the attack and accused the government for backing ISIS. Zabihullah Mujahid, Spokesman of the Taliban has furiously expressed “How is it possible that the attackers toke a moment to write on walls during the assault? What was the meaning of bringing flag to the scene?”.  Some believes that criticisms of the Taliban are pointless because the attack was similar to the attack on the American university of Afghanistan which left 13 dead in 2016.

Educational and academic organizations are highly valued and respected globally. Scholars and knowledgeable individuals of every society who are among the key factors of cultural, political, economic and social development are the graduates of academic institutions. However, absence of vigilant planning for curriculum can have negative and inevitable impact on our country’s development. While Development of a country without experts, scholars and knowledgeable individuals is far-fetched.

Sadly, the Kabul university attack was not the first on an academic institution in Afghanistan. Lately, Kawsar-e-Danish learning center in the west of Kabul was also targeted by a suicide explosion leaving 24 youths dead and 57 wounded.

Effects of the Attack on the Peace Process

The peace process has been actively progressing these days compared to the past. In addition to optimistic views about the peace process, it also has various future challenges. Although the people of Afghanistan do not expect the process to present positive result rapidly, but they do not see any other way for the end of war in the country. Hence, their eyes of hope are towards the peace process.

However, amplification of war and attacks on non-military establishment threaten the peace process. The Kabul university attack is a part of a series of attacks which can bury the hopes for peace and national reconciliation.

Recently, elements which oppose the peace process are actively operating in order to disrupt the peace negotiations between the Afghan government and the Taliban. They anonymously undertake sanguinary acts of terror in every province of the country. However, the public blames the Taliban because they persist to continue war and do not settle for a ceasefire.