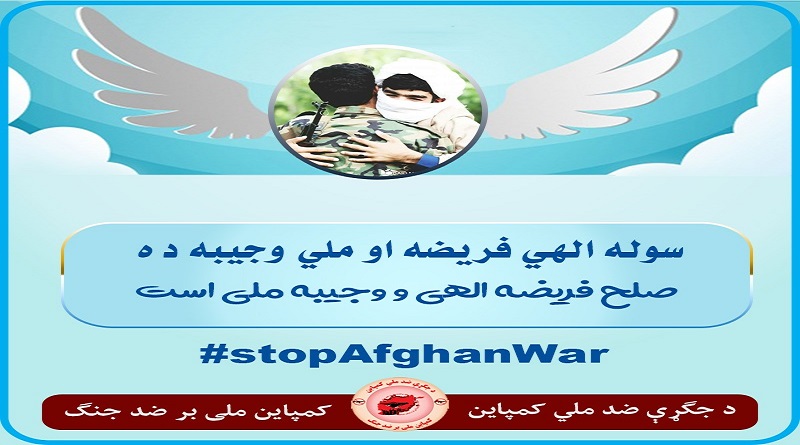 During the last month, we have witnessed a large-scale media campaign, the main purpose of which was the demand of Afghan nation from the involved parties of the war to stop the bloodshed immediately and to speed up the peace talks. The campaign started on 13th of June by social activists and social media users, in which tens of thousands of Afghans at home and abroad participated under the hashtags #StopAfghanWar and #SpeedupPeaceTalks.

Along with social activists and social media users, Islamic scholars and national personalities also participated in the campaign and raised their voices by publishing video and text messages, calling on the warring parties to speed up the peace talks. This campaign comes from the soul of the society and reflects the voice of the entire Afghan nation to speed up the peace process.

In this short article, the security situation in the country, the current stalemate in the peace talks and the demands of the participants of the national campaign to speed up peace talks are briefly discussed.

A Look at the Security Situation of the Country

The national campaign to accelerate peace talks has begun due to the severity of the ongoing war and bloodshed in the country and at the same time the lack of progress in peace talks. Afghan nation basically expected reduction in violence and the acceleration of the intra-Afghan peace talks with the announcement of the complete withdrawal of foreign troops from Afghanistan, but on the contrary, the security situation worsened and even the concerns of civil wars of which the Afghan nation had its bitter experience increased.

On the one hand, in the last two months, more than 100 districts have been taken by the Taliban, or have been exchanged between the Taliban and the government; on the other hand, the process of forming militia has begun with the support of the government under the name of people mobilization against the Taliban, with many Afghans seeing the formation of such militias as a potential threat to Afghanistan’s future security. How are people mobilized against the Taliban? How are they funded and equipped? Who trains them? And finally, what was the difference between their presence in the last few weeks and their absence? This and other similar questions have caused concerns among the people. That is why, some members of the Wolesi Jirga have also strongly criticized this process, calling it a serious threat to the future stability of the country.

With the escalation of war, the casualties of both sides and civilians have risen sharply. According to the monthly New York Times report on war causalities, during May, more than 400 Afghan troops and about 260 civilians were killed and hundreds injured in war and violence. On the other side, although the exact number of Taliban fighters’ casualties is not known, the Afghan government’s security departments have been making exaggerated claims of Taliban casualties, reporting that hundreds of Taliban have been killed on a daily basis, indicating an increase in casualties on both sides and civilians. In the meantime, there are still some bloody incidents and explosions and targeted killings, for which no group takes responsibility.

In this way, on the one hand, the current security situation has become bloodier than before, and on the other hand, fears about the future situation have increased nationally and internationally. Recently, Gen. Scott Miller, the commander-in-chief of US and NATO forces in Afghanistan, has also called the current situation “extremely worrying” emphasizing on a peaceful solution.

The Deadlock in Peace Talks

Currently, the main reason of the concerns of the Afghan nation is that, contrary to expectations, with the announcement of the complete withdrawal of foreign troops from Afghanistan, intra-Afghan talks have stalled and both sides seem to be thinking about monopolizing power through war and domination. That is why, US intelligence services, military commanders and members of Congress have all warned that the Afghan government won’t be able to stand up to the Taliban without the backing of American firepower, and have warned that the Taliban possibly might take control of Afghanistan in coming six months.

The intra-Afghan peace talks that began about 10 months ago in Doha, Qatar, have not made any significant progress yet, and both sides of the talks have been waiting for developments in the issue of Afghanistan, especially to the US approach towards Afghanistan. In recent days, Afghan leaders have travelled to the United States and their emphasis was on US military support against the Taliban. Dr. Abdullah, chairman of the High Council for National Reconciliation (HCNR), also said recently that “defending the people” is a priority in the current situation, not peace. He says that the Taliban are seeking to waste time by delaying peace talks. On the other side, the Taliban’s war machine is also believed to be in favor of focusing on the military option, but at the same time the Taliban accuse the government of abusing the peace negotiation process and say that the government’s negotiation team is not willing to negotiate.

In general, according to the past experiences, neither side will win the war through the use of force and military option; even if one side of the war gets domination by military force, it will bring widespread destruction but not stability to the country. For this reason, the expectation from the involved sides after the withdrawal of foreign forces was to focus on peace talks instead of battlefield, but now it seems that both sides of the war do not have a strong will for a peaceful solution and still strong aggressive language is exchanged between them.

Demands of the Afghan People

Social activists and social media users in the peace campaign called on both parties to end the current war immediately and focus on intra-Afghan peace talks. In some of their slogans, they emphasized that “peace cannot be achieved through war” and “only Afghans are being killed in the current war.” The slogans called on the involved parties to “immediately end the war in order to stop the bloodshed”, “resume the peace talks seriously and honestly”, and “for the goodwill and building trust, they must stop using aggressive language” and “prevent any ethnic or discriminative movements.”

Some social activists have also portrayed the adverse effects of the war in their writings. For example, Dr. Waheedullah Muslih published a photo and Facebook post of one of the participants in the anti-war campaign named Omid Habibi and wrote: “This is Omid Habibi. He was alive yesterday and he was fighting to survive, but he martyred today… This war vanishes us this way…” Omid Habibi wrote on his Facebook page the day before he was killed: “My whole life and that of my brothers have been spent in war. We no longer want to lose our loved ones. This war has no winners or losers. Please stop the war.” In this way, the campaign depicts the exhausting tiredness of Afghans from the current war.

Most of the participants of the campaign called on the country’s political leaders to deal responsibly with the current opportunity for peace, otherwise, especially if the regime collapses, Afghanistan will go to civil war and internal home-to-home war, which will have dire consequences for all sides and the situation will grow out of control.

Beside this, social activists and social media users have widely protested the assassination of scholars and peace activists. One of the campaign slogans states: “Stop the war; we do not want to lose our religious leaders and scholars anymore. In the past one year, 1200 religious scholars have been assassinated across the country. Who is responsible?” In this part of the campaign, figures such as Dr. Mohammad Ayaz Niazi, Dr. Mohammad Atef, Dr. Abdul Baqi Amin, Mawlawi Azizullah Muflih and other religious leaders and scholars who have been mysteriously assassinated in the past year and no one takes the responsibility for their assassination are pointed at.

This media campaign is a form of Non-Violent Resistance that has made significant strides in securing political and social justice in the contemporary history of the world, an excellent example of it is that of Mahatma Gandhi’s struggle in the Indian subcontinent that greatly helped the country gain independence from Britain in 1947. The Afghans now have no better choice but to use nonviolent protests to change the status quo, because the current war is practically taking its toll on the Afghans and it does not seem likely that the military option and the war will bring any happy prospects to the Afghans.

The national campaign to accelerate peace talks is being launched at a time when the security situation in the country has worsened with the announcement of the complete withdrawal of foreign troops, and new threats to the country’s future security and stability have been unveiled. Lack of progress in intra-Afghan peace talks and the escalation of war in the country have raised concerns that the situation in the country is deteriorating, and it appears that both sides are trying to monopolize power through force and war, as in the last two months, more than 100 districts across the country have fallen to the hands of Taliban and ethnic militias are being formed with government’s support in various parts of the country. This is an issue that poses a serious threat to the future security and stability of the country and reminds Afghans of the bitter experiences of the past.

According to the demands of the nation, especially the participants of this campaign, in the current phase, the people of Afghanistan expects a reduction in violence and acceleration of peace talks from the involved sides. With the complete withdrawal of foreign forces from the country, the major cause of the current war in the country has disappeared, and the remaining problems cannot be resolved through war at all, but need to be negotiated and reconciled. Otherwise, there are serious concerns about devastating civil wars, in which case, peace and stability in the country will be seriously challenged.