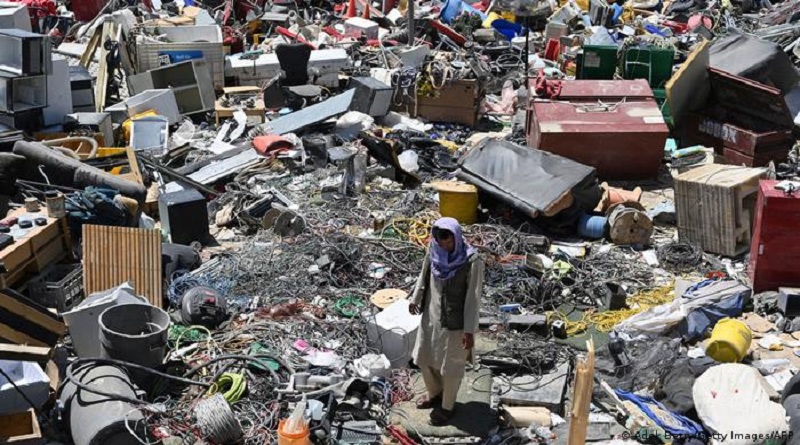 The withdrawal process of foreign troops basically started in the middle of 2011 when security responsibilities were handed over to Afghan security forces in Bamyan, Laghman and some other provinces of Afghanistan, and till 2014, the security responsibilities for all parts of the country were handed over to Afghan security forces. In that time too, the foreign troops while evacuating their military bases, were destroying military installations and facilities, and then handing them over to Afghan forces. As the foreign troops were not completely withdrawing from Afghanistan at that time, the political implications of handing over security responsibilities to Afghan forces were not so profound and serious like that of the last months of its complete withdrawal. That is why, in 2013, the Afghan government reacted towards the destruction of military installations and facilities by foreign troops and through the Afghan National Security Council, the concerns of Afghan government were conveyed to authorities of the coalition forces.

After eight years, when the US and NATO member states announced complete withdrawal of foreign troops from Afghanistan, once again the same situation repeated and the foreign troops destroyed their military bases and vehicles before handing them over to the Afghan military forces.

At the same time, a point of importance about this issue is that even if some of the sides might support destroying installations and military equipment by foreign troops, but it should be considered that these installations and equipment were vitally essential to the strength of Afghan military forces and overall for the economy of Afghanistan in the POST-PEACE stage and this issue shouldn’t have been short-sighted.

The treatment of foreign troops towards their installations and military equipment while leaving their military bases grabbed the attention of Afghans in most cases. They take their valuable equipment out of Afghanistan and completely destroy the less-valued equipment instead of handing them over to Afghanistan and those equipment and materials that couldn’t be destroyed completely are marketed to the regional demanders as iron that is worn out.

For example, the Shorabak military base (formerly Camp Bastion) which was the largest military and air base of foreign troops in southern Afghanistan for the past 20 years is now once again changed to a deserted empty field after the withdrawal of foreign troops from the base. A documentary from this military base, released in May this year, pictures that foreign troops destroying vehicles and equipment inside the base that are not worth re-transporting from Afghanistan and then sell the iron in the back market. This documentary also shows that military installations and concrete barriers are also being destroyed and even non-military vehicles and electrical wires and other tools are destroyed and damaged to a degree that it can’t be reused. A commander and a number of Afghan national army soldiers visiting the base are astonished by this attitude of foreign troops. One of them surprisingly says that if they were able to carry the concrete walls, they wouldn’t hesitate. The destroyers of these installations say that they don’t know the reason of this but they were ordered to do so by high-ranking officials.

In the bilateral security agreement (BSA) that was signed in 2014 by America and the Afghan government, the US lightly promised that they would hand over the military bases to the Afghan government. Although the text of the agreement is prepared in a way that America has no obligation throughout all the agreement but in a way it was mentioned that they will hand over the military installations to the Afghan government. Article 8, paragraph 1, of the agreement states, “United States forces shall return to Afghanistan any agreed facility or area, or any portion thereof, including buildings, non-relocatable structures, and assemblies connected to the soil, including those constructed, altered, or improved by United States forces, when no longer needed for United States forces’ use.” But contrary to this promise, in the last months, it was witnessed that most of the installations were destroyed by foreign troops.

The same story repeated in all other military bases including the large military base of Bagram. Allegedly, on daily basis, hundreds of American vehicles were being transported to Pakistan and nothing comes to sight except destruction in this base. Even it is not clear that whether these equipment and vehicles are carried to any aimed countries or to a third country like Pakistan.

Although some tools of little value, such as generators and other non-military equipment, have been handed over to the government of Afghanistan, but it is not at all worthy to be mentioned in comparison to those that are moved out of the country or destroyed. Some analysts believe that the promises of American aids are just deceptions, and that the destruction of these installations shows that the US does not want Afghans to be equipped with such tools and facilities.

A Look at the Heritage of Soviet and America to Afghanistan

The massive destruction of installations and military and non-military equipment by foreign troops and overall the withdrawal of American and NATO forces from Afghanistan reminds every one of the withdrawal of Soviet forces from Afghanistan in the 1990s. At that time, the Soviet forces, unlike the US and NATO forces, handed over all their military bases with its equipment and facilities to their backed government of Afghanistan and  left behind tens of billions of dollars worth of their military vehicles and equipment.

Evidence show that the Soviet forces left behind more than 2500 tanks, 500 fighter and cargo aircrafts and more than 5000 military vehicles to the government of Afghanistan. Even though, most of these equipment were destroyed during the civil war or smuggled to other countries, but if peace was restored in the country after the withdrawal of the Soviet forces, it would be a huge asset for Afghanistan.

Some studies indicate that the Soviet heritage had transformed the country’s military apparatus into one of the military powers in the region. Within the Armory range, nearly 400 up to 600 T-55 tanks, about 100 T-62 tanks equipped with computer-controlled and laser-measuring devices, and hundreds of other military devices were handed over to the Afghan government by Soviet forces. After the withdrawal of Soviet forces, Afghanistan owned hundreds of planes and helicopters. As an example, MiG-21 jets, Sukhoi bombers, Antonov aircraft, nearly 155 Mil Mi-24 fighter helicopters and tens of other military aircrafts were given to Afghanistan. Afghanistan’s air force was significantly stronger, and even the Afghan air defense was equipped with advanced radar systems and equipment.

From the other side, if we look at the past two decades, the US and NATO have spent a lot of money on equipping Afghan military forces on paper, but what we witness isn’t a force that can be spoken of. To the extent that the backbone of the Afghan air force is made up of about 40 Turboprop and 29 Super Tucano aircrafts which can’t compete with any attacking air force. These planes, due to its low price and low expenses are suitable for poor countries like Afghanistan. A number of C-5 aircrafts that were given to Afghanistan by the US have been sold as worn-out iron.  Now a limited number of aircrafts are active in the Afghan national army and a number of others are supposed to be given to Afghanistan, whose arrival is still not certain. In general, Afghanistan’s current air force is incomparable to any of the remaining from the former Soviet forces in terms of capability, and is far weaker and more inefficient.

There is a great difference between the American and Soviet heritage to Afghanistan which is only mentioned here as an example but the scope of this article is too limited for its details. Overall, the soviet heritage for Afghans regarding tools, vehicles and equipment in comparison to the US and NATO, was that it changed the national army of the time to a powerful army. But, currently, with the withdrawal of the US and NATO troops, the national army, regarding the equipment and tools, is not well-equipped that it has no words to utter to the foreign threats and only can stand against the internal groups without any defense and armor.

The Reasons behind the Destruction of Installations

The point that why the US left nothing to Afghanistan while the Soviet forces equipped Afghanistan is mostly related to the political policies of the two countries. Generally, the Soviets excellently equip the countries under their support while the US and western countries have no such policy.

In 2013, coalition forces announced the destruction of the facilities due to the lack of necessary capacity to operate and protect the equipment and tools. At that time, this argument  was considered unjustifiable by the Afghan government, but even if this argument was justifiable, the question arises as to why, over the past 20 years, despite the costs and commitments to equip and train Afghan military forces even the capacity to operate the equipment is not build in Afghan forces?!

Perhaps one of the most important factors that the US and NATO member states do not want to hand over their equipment and facilities to the Afghans is the fact that the US has learned a lesson from the realities of Afghan society and the destruction of the Soviet equipment that they have left to Afghanistan and they are concerned that the equipment, at a time, may fell to the hands of their enemies. The US also has a bitter experience of South Vietnam and the ruling government there that after direct US support in a short period of time, Vietnam was defeated and its military equipment fell to the hands of the number one enemy of the US. If we consider the current political situation of Afghanistan, it is clear that the current government of Afghanistan is also facing many challenges and problems and uncertain future awaits Afghans; the national interests are sacrificed for the personal interests of some powerbrokers and rulers and the current situation in Afghanistan has increased the possibility of repeating experiences of the past.

Overall, the policy of America with its allies is completely different from that of the Soviets. The contemporary history of the US witnesses that America has never been faithful to its allies and international partners and mostly it didn’t stay faithful to its commitments. That is why when the former president of Afghanistan in 2013 didn’t accept signing the security agreement, he said that he didn’t trust America. He said, “Whenever America decides to go, if we give them thousands of agreements, they will leave. After the years of Jihad and victory of Jihad, when the Soviets left Afghanistan, they, at once, left Afghanistan all alone and closed their embassies.” He continues, “Whenever there is no interest for them, they will never value us.”

Destroying installations and facilities by foreign troops basically shows lack of their commitment towards Afghanistan. The presence of US-led foreign troops over the past 20 years has failed to bring security and peace to the country. During these years, Afghanistan not only did not escape the interventions of neighboring countries but also it got involved in dangerous regional and trans-regional games. It is scheduled that, within a month, all the US and NATO troops will withdraw from Afghanistan and the government of America promised that they will keep supporting Afghan security forces but the destruction of these installations and facilities simply shows that this country has no commitment to the future of Afghanistan and there will come a day that they will completely leave behind Afghanistan and will become only an observer of the challenges and house-by-house civil wars.