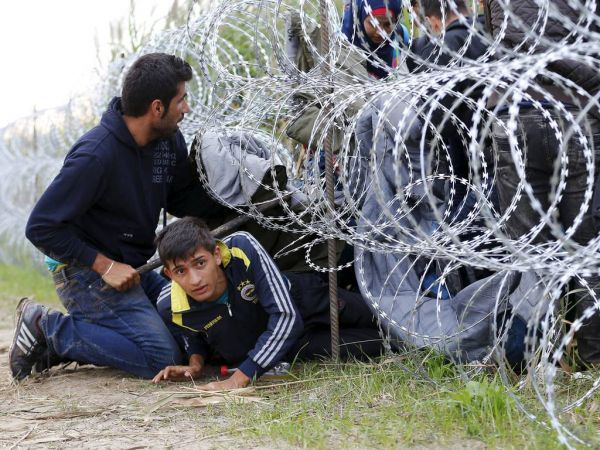 Europe is faced with a wave of migration from the East, which it does not remember such a broader displacement of humankinds after the Second World War. Some of the people migrate to Europe due to war, insecurity and uncertain future; however, some of them go to Europe in order to have better opportunities for pursuing a living in Europe. These people are from Africa, the Middle East and South Asia that, with accepting the risk of death, have chosen this route.

The war has brought humanitarian crisis to these countries and in a world, where globalization is one of its features, can make the world to be imagined as a “village” also.

Watching the overflow of migrants that cross the Mediterranean at the risk of death in order to reach to Europe is really amazing. In the past, the number of migrants that were hoping to reach Western Europe illegally was too small, but in 2011, thousands of Tunisian refugees, by crossing the Mediterranean, reached to the island of “Lampydvsa” in Greece. This was followed by the uprising known as the Arabic Spring in this country; however, the new wave of immigration from Syria, Afghanistan and African countries has broken the previous records.

The IOM estimates that more than 464,000 migrants have crossed into Europe by sea for the first nine months of 2015, however, this number does not include the migrants that preferred to fill the asylum application and, considering that everyday thousands of new migrants join the previously migrated people, so, these numbers cannot be called very precise, then. [1]From January to August 2015, Frontex reported that more than 500 thousands migrants crossed into Europe. Also, 3-4 thousands of them died due to different incidents especially due to sinking of timeworn boats. [2]

The Syrians fleeing their country’s four-and-a-half-year-old civil war made up the largest group (39 percent). Afghans looking to escape the ongoing war with Taliban rebels (11 percent), and Eritreans fleeing forced labor (7 percent) made up the second and third largest groups of migrants, respectively. Deteriorating security and grinding poverty in Iraq, Nigeria, Pakistan, Somalia, and Sudan have also contributed to the migrant influx. [3]

Against the extreme overflow of migration, European countries have adopted different measures. For example, Hungary has closed its border with barbed wire, but the border police of Macedonia and Great Britain get use of force in order to prevent the entry of migrants, however, closing the borders, in practice, has not solved the problem and has not prevented the asylum seekers from crossing into Europe.

Germany: the Destination of most of the Asylum Seekers

According to immigration regulations in Europe, immigrants who entered the first country of the EU should be registered; but the immigrants who come to Europe do not intend to stay in the first country. EU member states hardest hit by the economic crisis, like Greece and Italy, have also served as the main points of entry for hundreds of thousands migrants and refugees, which most of them are come from Turkey and their final destination is Germany, due to their proximity to the Mediterranean Basin. On the other word, the asylum seekers have chosen their country of residence from the very beginning.

On the other side, applicants’ religious background will have an impact on their refugee status applications. Religion of the refugees is one of the concerns of European countries. In the past, if right-handed extremist parties were opposing asylum seekers from Islamic countries to reside in their counties, now, the officials of these countries have similar concerns, for example, Slovakia and Cyprus announced that they accept only Syrian Christians and they will not accept Muslims.[4] Poland has called the Muslim migrants as a threat to its Christian values.

The Need for cheap Labor

Overall, the European countries need the young and cheap labor force due to its decrease in population growth and rise in the average age of its citizens. According to the statistics, the population growth in Germany was close to zero in recent years. [5] Even poorer European countries like Greece are facing a decline in population. Therefore, a large number of migrants who do not expect too much from the government will benefit the host countries in the long run, also.

Among them, most of the Syrian migrants are educated and specialists that can be considered as a human capital for the European countries, but in the current situation in which Europe still struggles with the economic crisis and the unemployment rate is extremely high in many European countries, providing work to this number of migrants is difficult and even impossible, especially if we add the problem of alienation with the language and culture as well as the environment.

One of the main concerns of the European countries from the wave immigration to their countries is cultural contrast with the migrants. [6]Today, a number of European Muslims are fighting in the ranks of the “Islamic State” group in Syria. For several times, Muslim youth in France and Great Britain conducted violent protests against the governments in 2011 and 2013. This issue clears that Muslim migrants adapted the environment in Europe and they feel themselves aliens there.

Germany, which is the destination of the vast majority of the migrants, has practically no achievement in establishing a multi-cultural community of people who live in this country. The ​​German Chancellor, Angela Merkel, explicitly stated this word in 2010. In many European countries such as Great Britain, Switzerland, Denmark, Italy, and Sweden, the issue of refugees, particularly from the Third World, is one of the important issues raised by the opposition of the governments.

Unlike the migrants in the United States of America and Canada that are absorbed in the community, the asylum seekers of the Third World in Europe retain their culture and the values of their country of origin.

The cost of travel for each migrant on average level is more than ten thousand dollars which half of this amount must be paid in order to cross into Turkey only and the other half includes the cost of crossing the Mediterranean and other expenditures. Due for this, Afghan migrants have paid between $1200 million- $1300 million dollars for the trip of Europe.

Almost the entire Afghans migrating to Europe claim that at least one of their family members was killed by the Taliban. The market for preparing fake documents that show that the person is threatened by the Taliban has flourished in Kabul. After the latest events in Kunduz, the pretext of the Kunduz War has been added to the grounds.

A reason to encourage the people to leave Afghanistan along with insecurity and economic problems is the experience of past 14 years. Since 2001, after the Taliban regime overthrew, a lot of Afghans who had spent many years in Europe returned to Afghanistan, despite the fact that a large number of them did not have education and knowledge; they returned just because they were familiar with foreign language, so, they received good working opportunities. This experience has led many youth to go toward Europe; they think that going to Europe will give them prestige and if one day they have to return to the country, they would have better living conditions in the country, then.

However, the government of Germany has announced that the priority will be given to Syrian migrants; as the situation in Afghanistan is not so bad, so, the Afghan migrants will be returned to their countries. [8]

A reason behind this decision of Germany would be that the Afghan migrants are not professional and trained workers. Long war in Afghanistan has brought an illiterate or at least less-educated generation that could not be easily absorbed in the labor market of Germany. Their training will need long time and costs, while there are a lot of specialists among Syrian migrants.

Due to the economic crisis and unemployment in Europe, finding job is difficult for these Afghans and their stay in the European countries can be an economic burden to these countries. On the other hand, returning more than a hundred thousand Afghans that crossed into Europe at the risk of death will not be that much easy for the European countries.