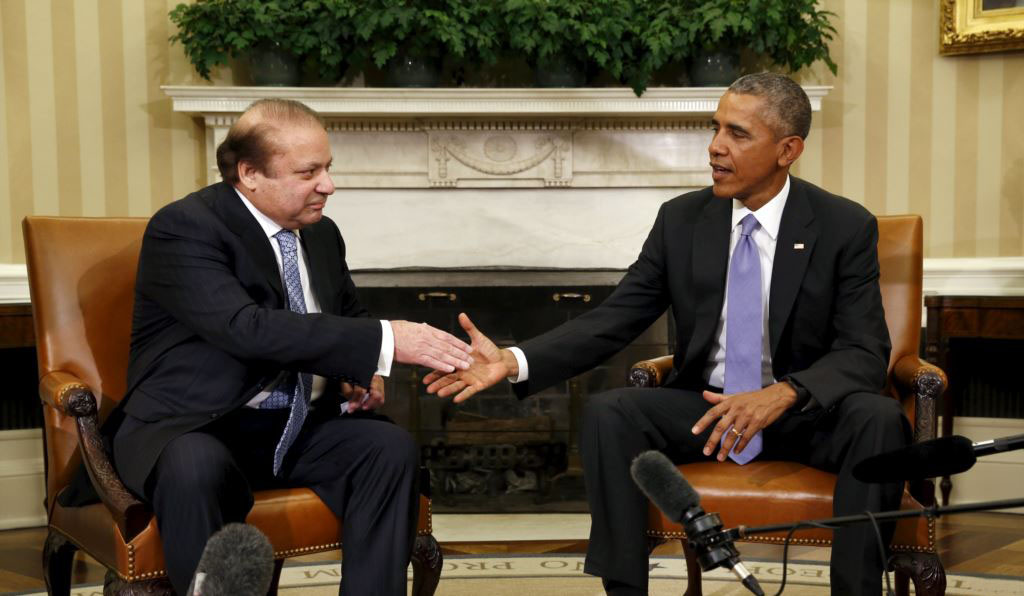 On October 20, Prime Minister Muhammad Nawaz Sharif had left on a four-day official visit to Washington for talks on security situation and the peace process in Afghanistan, the internal situation of Pakistan and the relations between India and Pakistan with his US counterpart.

Nawaz Sharif during being on his second official visit to US gave a speech in a US think-tank and said that: “We have told Afghan President Ashraf Ghani that Pakistan was prepared to help revive stalled Afghan peace talks but could not bring the Taliban to the negotiating table and be asked to kill them at the same time.”

After the WWII, South Asia received more sustained attention from America and the United States followed the Truman Policy in this regard. During the Cold War, the attention of America increased towards South Asia due to Pak-India wars, India-China war and the Soviet Invasion of Afghanistan. Even in the post cold war, America, in its foreign policy, has given importance to this region under the banner of war on “terrorism” and “extremism”. Specially, America, after 2001, has military presence in a part of this region, Afghanistan.

After Barack Obama became President in 2009, the attention of America increased in this region, in the case; it had military presence in the Middle East since 2003. In 2009, US President Barack Obama ordered 30,000 more US troops to Afghanistan. In 2001, Hillary Clinton, the head of US State Department announced a policy named (Rebalancing Asia) or (Pivot to Asia); she wrote in an article the Foreign Policy Journal: “As the war in Iraq winds down and America begins to withdraw its forces from Afghanistan, the United States stands at a pivot point. Over the last 10 years, we have allocated immense resources to those two theaters. In the next 10 years, we need to be smart and systematic about where we invest time and energy, so that we put ourselves in the best position to sustain our leadership, secure our interests, and advance our values. [1]”

From 2011, the attention of America has been gradually grabbed to South and East Asia. That is why America has made close ties with Japan, India and Australia in order to control the raising economic power of China.

America, from the last two years, criticizes Pakistan for the presence of Haqqani Network, Taliban and Lashkar-e Tayyiba group in this country and, for several times, has threatened Pakistan that it would stop its annual assistance to Pakistan. Besides that, the ties between US and India became closer due to the international interests of the United States. On January 2015, the US President has an official visit to US, and the Indian Prime Minister, Narendra Modi, arrived in Washington as a result of an official visit in September of this year, then. Both of these visits have made the ties between USA and India closer and friendlier.

The US President Barack Obama invited Pakistani PM Nawaz Sharif in order to make the ties between Islamabad and Washington better due after the relations between Delhi and Washington became closer. Therefore, America promised Pakistan with providing F-16 military aircrafts as well as assistance in other fields.

The Motivation of Pakistan to Revive the Afghan Peace Talks

The importance of Nawaz Sharif’s visit to America was in that he arrived in America a week after the new plan of staying American soldiers in Afghanistan passed. Besides that, an important part of Obama and Nawaz Sharif talks was related to security and peace process in Afghanistan and this issue reflected in the joint statement of Pakistan and America. They in the joint statement said: “Both leaders expressed their commitment to advance an Afghan-­owned and -led peace and reconciliation process between the Afghan government and the Afghan Taliban, and called on Taliban leaders to enter into direct talks with Kabul and work toward a sustainable peace settlement.”[3]

Besides that, the Prime Minister Nawaz Sharif outlined the actions that Pakistan is taking under the National Action Plan to ensure that the Taliban – including the Haqqani Network – are unable to operate from the soil of Pakistan against Afghanistan[4].

Nawaz Sharif during his speech in the US Institute of Peace said, “Told Afghan President Ashraf Ghani that Pakistan was prepared to help revive stalled Afghan peace talks but could not bring the Taliban to the negotiating table and be asked to kill them at the same time. [5]” However, the words of Nawaz Sharif carried out reaction in Afghanistan and a number of Afghan Senators called them “Fraud” and requested the President to stand on his latest position regarding Pakistan. Some analysts believe that Pakistan is not truthful in its words; it still neither targeted the Taliban and nor brought them to the negotiating table.

It is not the first time that Pakistan urges to revive the peace process in Pakistan; Islamabad, after the announcement of the death news of Mullah Mohammad Omar and a series of bloody attacks in Kabul, for several times, had expressed its readiness for reinitiating the peace process. However, the Kabul-Islamabad ties were unexampled after the establishment of the National Unity Government (NUG), the Afghanistan government provided a lot of privileges to Pakistan and its relations with India froze if compare to Karzai’s era. But after a series of bloody incidents in Kabul, the official position and policy of Kabul regarding Islamabad changed; and after the promises of Pakistan with NUG were not fulfilled, it was, once again, proved that Pakistan shows its role more important than it is and it cannot do what it promises in practice.

The importance of this Visit to Afghanistan and India

Afghan President Ashraf Ghani in a speech before Nawaz Sharif’s visit to America said: “the Prime Minister of Pakistan is going to head to America in the next week and he, in there, would insist on eliminating the shelters of terrorists. His clear message to the proponent of Taliban is that their only rescue way is to enter into direct talks with the legitimate government of Afghanistan and work toward a sustainable peace settlement” [6].

Beside the recent distrust between Kabul and Islamabad, Afghan President hoped for this visit of Nawaz Sharif; however, considering the consequences of this visit and Nawaz Sharif’s statement, it looks problematic that Pakistan and its civilian political officials would take steps that the Afghan side hopes for.

From the other hand, generally, the relations between Pakistan and India are frozen after the Mumbai attacks and specifically after the last one year and they have stayed involved in attack on each other in border areas. Also, the Pakistani Army has a hostile approach toward India; after Nawaz Sharif took power, the Pakistani Army advised him not to follow the friendlier policy toward India; however, at first Nawaz Sharif went toward India but he has changed his policy and, to a large extent, implements the military advices. Therefore, he dismissed the National Security Advisor, Sartaj Aziz and appointed the new retired Lieutenant General Nasser Khan Janjua instead.

Meanwhile, some Indian newspapers and analysts considered this visit as “important”; however, a lot of concerns of India reduced after this visit; because, from one hand, Nawaz Sharif’s visit didn’t have many achievements and on the other hand the Delhi-Washington relations are more strategic and is bound to the rising China.

[4]For more information, see the joint statement of Pakistan and US:
https://www.whitehouse.gov/the-press-office/2015/10/22/2015-joint-statement-president-barack-obama-and-prime-minister-nawaz