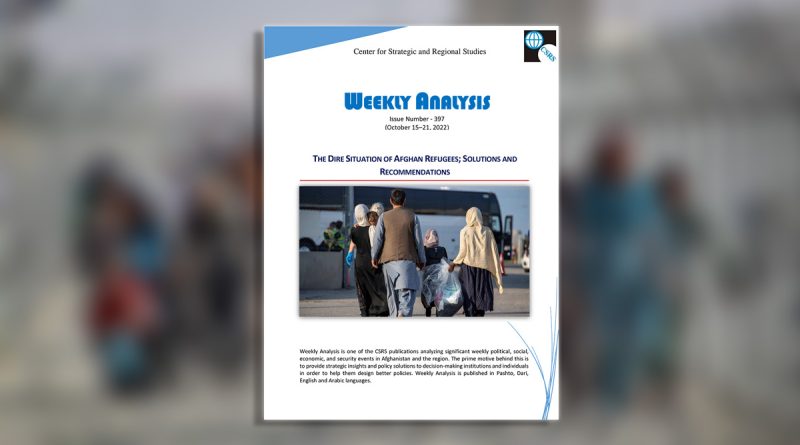 Afghans have been suffering from immigration difficulties for the past few decades. According to a survey, almost 70 percent of Afghans have experienced immigration once in their life. Some other statistics show that one in every 4 or 5 Afghans has immigrated to Pakistan or Iran once in the last few decades.
Afghan refugees not only face a lot of problems on the way to other countries but also face many challenges after their arrival. Amnesty International recently said in a report that Iranian and Turkish security forces unlawfully open fire on Afghans, including women and children, who attempt to cross their borders and reach safety. The organization documented at least 14 killings by Iranian and Turkish security forces, 11 of whom were killed by the Iranian security forces. According to the report, the actual death toll is likely to be significantly higher. Humanitarian workers and Afghan doctors told the organization they recorded at least 59 deaths and 31 injuries between August and December 2021 alone.
On the other hand, various countries, particularly Iran and Turkey, routinely return Afghan refugees unlawfully and forcibly and ill-treat them. Afghan refugees living in Iran and Pakistan also face a lot of problems and harassment from time to time. For instance, a few months ago, there was a wave of persecution and harassment of Afghan refugees and migrants in Iran, during which thousands of refugees and migrants were tortured, killed or forcibly deported. Even the most disturbing and heartbreaking videos of the torture of Afghan refugees have been circulated on social media.
Since last August 2021, a new phase of Afghan immigration has started, mainly due to political and economic problems in the country. Since last year, in addition to normal immigration, many educated Afghans have either left or leaving the country, which is called brain drain in academic terms. It is assumed that the reason is the harsh policies of the Islamic Emirate. Most of these emigrants are concerned about the restrictions in the field of education, the restrictions on freedom of speech and the intolerance of dissenting thoughts, the provision of public jobs only to the members of the Taliban, and other such factors.
In addition to reviewing the number of Afghan refugees and their situation in different countries, this paper also includes some recommendations for the refugees’ host countries, international agencies and other related policymakers and aid agencies. It also includes the recommendations presented in the international seminar entitled “The Future of Relations between Afghanistan and Neighboring Countries” by the Center for Strategic and Regional Studies (CSRS) in Kabul a few months ago.

Afghan immigration has a long history, and it was due to both economic and security factors. Still, the communist coup of April 27, 1978, forced Afghans to leave Afghanistan “en masse” for the first time.
This immigration was in four phases. The first phase lasted from the Saur communist coup to the Soviet invasion. The second phase started with the Soviet invasion of Afghanistan and ended with the withdrawal of the Soviets. The third phase is the period of the civil war in Afghanistan, and the fourth phase started with the attacks of American and NATO forces on Afghan soil.
In the first phase, According to the United Nations Refugee Agency figures, the number of Afghan refugees in Pakistan reached 80000 in 1978, then 400000 in 1979. Similarly, the number of Afghan refugees in Iran reached 100000 in 1979.
In the second phase, one year after the Soviet invasion of Afghanistan (1980), the total number of Afghan refugees in the world reached approximately 1.73 million people. In the second year, this number reached 3.88 million, and in the year of the withdrawal of the Soviets (1989), the total number of Afghan refugees in the world was 5.664 million. Afghans were forced to immigrate more than ever before as the immigration of Afghans to the industrialized world also began during these years. The return of refugees to the country also started in this phase, according to the Geneva Accords.
In the third phase (civil war), after the withdrawal of the Soviets, until the arrival of American and NATO forces, approximately 4 million refugees returned to the country. Still, with the beginning of the civil war, the process of immigration from Afghanistan was going on. In this phase, Afghan refugees were received coldly in the neighbouring countries compared to the first phase.
In the fourth phase, after the 9/11 attacks in 2001, when the US-led NATO forces attacked Afghanistan, nearly 300 thousand Afghans were again forced to leave the country and seek refuge in Pakistan. But when an interim government was established in Kabul after the Bonn conference, approximately 3.2 million Afghans returned from Pakistan and Iran until 2005. Still, when concerns about the country’s security situation increased after 2014, immigration from Afghanistan to European countries accelerated again.

The first tripartite agreement about Afghan refugees between (Afghanistan-Pakistan-UNHCR) was signed in March 2003, and the first general census of Afghan refugees was conducted in 2005. According to the census, 3,047 million Afghans were refugees in Pakistan. In general, 58 percent of Afghan refugees lived outside and 42 percent in the refugee camps. About 51 percent of these refugees had immigrated to Pakistan before 1985.
From October 2006 to February 2007, approximately 2161984 Afghans were registered and given (Afghan Citizen) cards. Since many refugees returned to the country, the number dropped to about 1554910 registered Afghan refugees living in Pakistan in 2015. This number was slightly reduced in 2019 and reached 1.4 million people. There is no accurate data on unregistered Afghan refugees, but in 2015, according to the Minister for States and Frontier Regions of Pakistan, the number of unregistered Afghan refugees was approximately 1.4 million.
As of January 2022, approximately 3 million Afghans were living in Pakistan, around 1.4 million of them are Proof of Registration (PoR) cardholders, approximately 840 000 hold an Afghan Citizen Card (ACC), and an estimated 775 000 are undocumented. While PoR and ACC cardholders are offered limited protection, mainly from refoulement, undocumented Afghans are exposed to arrest, detention and deportation.

THE CURRENT SITUATION OF AFGHAN REFUGEES

Although millions of Afghan refugees have returned from neighbouring countries and the rest of the world in the past two decades, at the same time, due to various factors, the process of refugees leaving the country continued. Therefore, current figures show that at least 3 million Afghan refugees live in Iran, 3 million in Pakistan, and about one million in the rest of the world, particularly in European countries.
Since last August (2021), the immigration process of Afghans has accelerated again, and hundreds of thousands of Afghans are choosing to immigrate to neighbouring countries and the rest of the world. According to some statistics, after August 15, 2021, at least 124000 Afghans were evacuated in just six weeks, and since then, tens of thousands of Afghans have gradually left the country. For instance, the United Nations High Commissioner for Refugees (UNHCR) has documented 117547 new arrivals from Afghanistan in Pakistan, with a significant peak of 35289 persons in August 2021. This phase was very different from the previous ones because most Afghans who left the country were highly educated and skilled people.
Currently, the largest number of refugees are in the two neighbouring countries, Iran and Pakistan. The third country where many Afghan refugees are now living is Turkey. Some figures show that there are currently 300000 to 500000 Afghan refugees in Turkey. However, the opposition party of the Turkish government, which criticizes the Turkish government in terms of refugees, claims that the number of Afghan refugees in this country is 1.5 million. Still, some sources estimate that there are currently around 800000 Afghan refugees living in Turkey. In addition, Afghans have immigrated to other neighbouring countries such as Tajikistan, but because of their low number, they have fewer problems.
In the past few decades, Afghan refugees have always faced many severe problems and challenges in different countries, mainly neighbouring countries. On the one hand, they even face death threats on the dangerous routes of immigration, especially on the way to Europe, as we can mention the latest report of Amnesty International regarding opening fire on Afghan refugees by the security forces of Iran and Turkey; On the other hand, after arrival, they are constantly deprived of their human rights, and sometimes subjected to excruciating torture, long-term prison terms without trial, forced use in proxy wars, lack of financial and job security, staying like prisoners for a long time in refugees camps, forced return and deportation and so on.
The ill-treatment of Afghan refugees in other countries and their problems can be clearly seen in the fact that the police of the host countries continuously harass even refugees with legal documents. For instance, a study has found that since 2015 in Pakistan, hundreds and thousands of such refugees have been arrested by the government of Pakistan every year who have immigration documents (PoR cards). The number of such arrests was high in some years and low in others. For example, in 2017, at least 3744 such refugees were arrested by the government of Pakistan.
In a recent case, reports of the arrest of hundreds of Afghan refugees in Pakistan, including women and children, were published in early September (2022). Some refugees have said in interviews with the media that some of their family members have been detained for several months by the government of Pakistan for not having legal documents, and the families of the arrested people are living in a dire situation.
Two Iranian Clerics Killed In Knife Attack In Mashhad
In Iran, a few months ago, after two Iranian clerics were killed in a knife attack by an Afghan citizen, a lot of problems arose for Afghan refugees, and many videos were circulated on social media, showing that Afghan refugees are being brutally tortured, even their body parts are amputated.
Therefore, along with various other problems, the arrest of Afghan refugees, forced return and deportation, harassment and torture are the problems that have reactions at the national and international levels. However, the process of arresting and forcibly returning Afghan refugees continued in the past years. For example, according to the United Nations Refugee Agency, more than 3600 Afghan refugees were detained by the Pakistani police in 2015. In Iran, the process of arresting Afghan refugees was always taking place and rarely stopped. The latest figures show that at least 135000 Afghan refugees have been deported from Iran in the past six months.