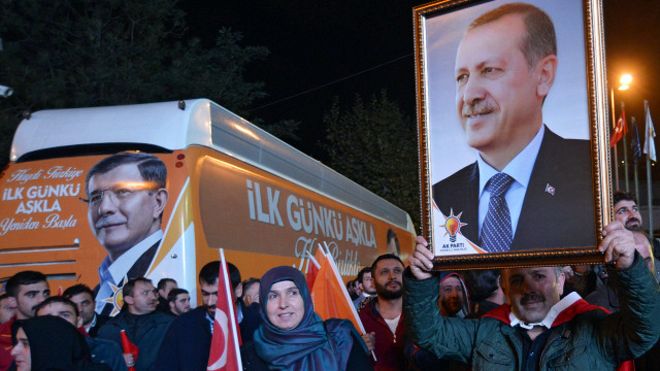 Before these elections, the world, especially the West, believed that the result of the recent elections would not be different from the previous one. No party could win the majority of votes in Parliamentary Elections and as a result, Turkey would remain in a political deadlock to form a coalition government.

The Parties participated in the Election

More than 54 million Turkish citizens are capable to vote for the 550 Parliamentary seats and according to the Turkish Constitution, 10% threshold is necessary for every party to win seats in the new parliament; otherwise, their seats would be transferred to the winner party. 16 political parties had participated in July 7th, 2015 general elections that only 4 parties among them could surpass the 10% threshold necessary to win seats in the new parliament.

The leading party in Turkey is AKP that rules the country since 2002. AKP received the power after it promised the people that it would develop the economy of Turkey. AKP is an Islamist party that could secure its position, by accepting a lot of risks, in the secular political system of Turkey that differentiate religion from politics. This party fulfilled its entire promises and could turn Turkey, which once was faced economic crisis and security challenges, to a stable and developed country.

Republican People’s Party (CHP) is one the oldest parties in Turkey that has ruled Turkey in different eras alone.

The Nationalist Movement Party (MHP) with Islamic approach has supported some positions of AKP, also.

In election held on July 7, AKP won 258 seats with 40.9% of the vote but it was not enough to form a one party government.

Figure 1: Statistics of the First Round of Turkish Parliamentary Elections

Change in the second round of Elections

After AKP could not form the government by gaining 258 seats and negotiations for forming a coalition government broke down, the snap election was called by President Recep Tayyip Erdoğon on 24 August 2015. The second round of the elections changed this equation and AKP, by regaining the Parliamentary majority, became the winner of Turkey’s earlier elections.

With 49.36% of the vote and 316 seats, the AKP won a comfortable majority of 84 which made Ahmed Davouoglu, the leader of this party, to form a government alone. The CHP leading by Kemal Kilicdaroglu retained its main opposition status with 134 seats and 25.4% of the vote. The HDP, which is considered as a political wing of PKK and is, being leaded by Selahuddin Demirtas, saw decreases in support, with hovering dangerously close to the 10% election threshold needed to win seats. The HDP came third in terms of seats with 59 MPs despite coming fourth in terms of votes with 10.7%.

The MHP, which was seen to have been punished for its perceivably unconstructive stance since June, halved their parliamentary representation from 80 to 36 and won 11.9% of the vote. However, the AKP wanted to form a coalition with MHP but it put heavy conditions that were unacceptable to AKP.

Totally, 16 parties and 21 independent candidates took part in November 1st Parliamentary elections. The elections resulted in the Justice and Development Party (AKP) regaining a Parliamentary majority following a ‘shock’ victory for President Recep Tayyip Erdogan and the party itself. The MHP and HDP were considered as the losers of this election.

Figure 2: Statistics for the second round of Turkey’s Parliamentary Elections

Factors behind the victory of AKP

Factors behind the victory of AKP in the recent elections are as following:

The concerns of Turkish people about security and economic challenges have main influence on the victory of this party. Amid the both elections, Turkey witness tragedies including increase in military operations insides the country, end of ceasefire between the Turkish army and PKK, decline in the economy, in particular a surge by the US dollar at the expense of the Turkish lira and migrant crisis that were entering into Europe through Turkey.

Turkey was faced a lot of security challenges; war and insecurity in Syria impacts Turkey and, recently Turkey was also witness of insecurity incidents that have caused its people to be solicitous for the future of their country. Many critics, in the Turkish opposition as well as the Western media, blamed the AKP government and President Recep Tayyip Erdogan for both of these challenges. Many Turks, however, viewed things to the contrary. To them, these problems had been caused by the absence of a strong AKP government since June 7. However, the AKP government had proved its ability in tackling insecurity previously. Recep Tayyip Erdogan, the President of Turkey, before that latest election, pointing the conflict between Turkish army and Kurdish rebels, said that reassuring stability would be possible only if this party (AKP) gained majority in the upcoming Parliamentary elections.

Revenues from tourism which are a large part of the country’s income are also related to security. Industry and Tourism form 32 and 51 percent of the country’s economy accordingly and they are highly sensitive to uncertainty. Since 2006, the statistics of tourism has increased by every year. In 2006, about 18 million tourists visited Turkey; this number had risen to 41 million tourists in 2014, however, the number of tourists to Turkey decreased due to insecurity by 2015.

Studies show that AKP by presenting a clear and practical program in the field of economy and security in its Electoral Campaign could allocate more votes in 80 provinces out of 81 provinces of Turkey compare to 5 months ago. Ironically, a lot of increase in votes of this party, unlike the expectations, was seen in the Kurdish provinces of the south and southeast. Perhaps, this issue caused the results “unexpected: because the analysts had thought that the Kurds would not cast vote for the AKP, while in practice it happened. In fact, none of the opposition parties in could offer a solution to the current situation in the last few months.

This time, the AKP did great efforts in their electoral campaigns. Even when the elections’ results were being announced, the AKP leaders were not present at the headquarters of the Party because they were at their constituencies.

Armed attacks by the Kurdistan Workers Party (PKK) and the government operations against this group was another factor that the people did not vote the Kurdish-Democratic People’s Party (HDP), because a lot of people consider this party as a political wing of the PKK in Turkey and due for this the seats of HDP reduced from 80 seats to 59 seats in latest Parliamentary Elections. Also, as the anti-Turkish government Kurdish groups became close to Iran and America, it caused the Islamist Kurds that were voted for the HDP five months ago to vote for the AKP this time.

The People of Turkey have had bitter experience of coalition governments that were busy with their internal disputes and had fewer opportunities to solve the problems of the people; therefor, they wished to have political stability and preferred the Justice and Development Party (AKP) to rule the country alone. Therefore, a group of nationalists that had voted the MHP in previous elections, voted for the Justice and Development Party (AKP), this time.

However, a lot changes would not be seen in the policies of the new government, but still the impact of this party’s victory on Turkey’s internal situation could be stated in two points as below:

This point also made it clear that elections could affect the political future of Turkey; in the past, most of Kurds live in Turkey, having every kind of ideology, were supporting the armed struggle of the PKK against the Turkish government; however, it seems that Kurdish Islamists are gradually solidified in order to separate from PKK and ensure the rights of Kurds through peaceful means instead of violent means that had not got any achievement for them. This would be a good opportunity for Erdogan to end the problem of the Kurds’ war that has faced Turkey with security challenges since decades.

Impact of AKP’s Victory on the Region

The Migration Crisis, the Syrian Civil War and the war against ISIL are the issue beside the internal issues had doubled the importance of the Turkey’s elections’ results to the foreign powers and neighbors. The position of Turkey in today’s world and AKP’s foreign policy and the victory of this party in Turkey’s election would have impacts on the region and the world.

The Islamic World: If the AKP changes the Constitution and through it, increase the powers of the President, we would be witnessing a powerful Islamist government in Turkey and its impact on the entire world, especially the Islamic World. On the other side, the Turkish government will go into the fight against ISIL, which is, in fact, the result of the political developments in the Arab world, with more seriousness, because some bloody explosions has carried out by the group in Turkey recently.

Syria and Iraq: The Turkish government has concerns on the situation of Syria and Iraq because it has borders with both of them, especially due to Syrian refugees and expansion of insecurities from Syria into this country. So, the new government will put pressure on the countries involved in the crisis of Syria and Iraq to end the war in this region. Therefore, the Turkish President, after his party’s victory in the elections, discussed about the Syrian crisis with his Russian counterpart, Vladimir Putin.

Afghanistan: The AKP’s victory will have a positive impact on the situation in Afghanistan, because Turkey, in more than a decade, has supported the peace and stability in Afghanistan. The Turkish government tried to cool down the relations of the Afghan government with neighboring countries, especially Pakistan, which has an important role in the Afghan peace process. In this regards, it started the Istanbul Peace process for Afghanistan between Afghanistan, Pakistan and Turkey in Turkey’s Capital, Ankara in 2007, and until 2013 its eight trilateral meetings are held. In these meetings, discussions on resolving the disagreement between Afghanistan and Pakistan with the mediation of Turkey were held in these meetings; the trilateral cooperation between the countries was discussed and in addition to them, the different aspects of the Afghan peace process were discussed in these meetings, also.  The armed opposition of the Afghan government has soft approach to Turkey which is meanwhile a member of NATO and so this country can play a positive role in the Afghan peace process.