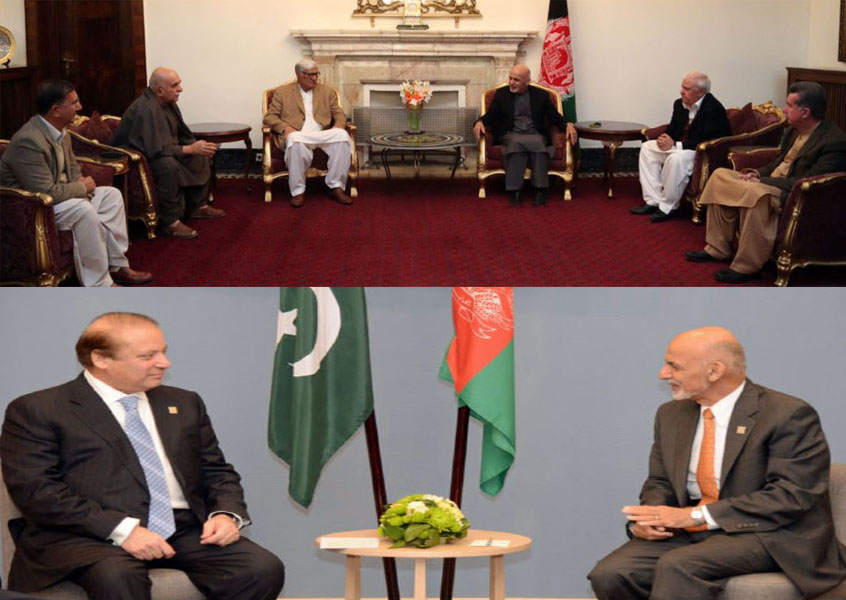 Last week, Afghan President Ashraf Ghani and Pakistani Premier Nawaz Sharif met in Paris at the sidelines of Climate Change Conference. Before this meeting, both leaders met in a trilateral meeting with the British Prime Minister (PM). In both meetings, Pakistani side talked about the revival of peace and reconciliation process with the Taliban.

Five days before this meeting, leaders of the Pakistani Pashtun nationalist parties had a 3-day visit to Kabul. However, the Pakistani delegation was invited by Afghan President, but they had also brought Nawaz Sharif’s message; and meanwhile, they encouraged President Ghani to meet the Pakistani PM in Paris.

After the death news of Mullah Mohammad Omar, the Afghan peace process became stalled; Pakistan, insistently, talked about reviving the stalled peace process and, as a result of this, the regional diplomacy became active (for further information on this topic, read 142nd issue of the Weekly Analysis) and, these reasons, once again, provided the chance for direct talks between Pakistan and Afghanistan.

In this analysis, you will read about the impact of recent two meetings between Ashraf Ghani and Nawaz Sharif on Pak-Afghan ties and their role in reviving the stalled peace process.

Pashto and Pashtuns: The Elements of Pak-Afghan Diplomacy

During the Cold War, Pakistan’s Pashtun leaders were living in Kabul for several years; therefore, Kabul’s support from Pakistan’s Pashtuns and the ‘Pashtunistan’ issue were among the important factors of Afghanistan’s foreign policy. Meanwhile, Pakistan had also sheltered a number of Afghan Pashtuns in its soil and calls its support from them as a “necessity”. This issue, to a large extent, had deeps impacts on Kabul-Islamabad ties.

Later, in Hamid Karzai’s era, Kabul invited Pakistan’s Pashtun leaders and, in 2007, it held a Grand Jirga of Pakistani and Afghan leaders in order to make the Pak-Afghan ties better and tranquilize the armed position in both sides of the Durand Line. About 700 leaders from both countries participated in this Jirga, and it was the first of its kind, in which the leaders of both sides had officially participated in it. This Jirga established a 50-member committee in order to present their solutions regarding the peace process. However, this Jirga failed, because neither the Afghan Taliban and nor the tribal leaders were invited to it. Pakistani leaders were also participated in this Jirga and the former Pakistani president, Perviz Musharraf, also participated in the closing ceremony of the Jirga.

After Ashraf Ghani became President, he, during his visit to Pakistan, invited a number of Pakistani parties’ leaders in order to come to Kabul; therefore, Pakistan Pashtun Nationalist leaders attended Kabul in January, 2015. [1] Now, Ashraf Ghani, once again, invited the leaders of Pakistan’s Pashtun political parties to Kabul in this case the Kabul-Islamabad ties are worse than every other time in the past one year.

During the Cold War, Pakistan and Afghanistan had sheltered the opposition elements against each other; however, after the Cold War, both Kabul and Islamabad used the “Pashto” card in remaking its bilateral relations. Hence, many Pashtun delegations from both sides had visits to each other’s Capitals in order to establish good relations between both countries.

The Pashtun leaders’ visits to Kabul in January 2015 had brought optimism to a number of diplomats in Pakistan’s Foreign Ministry. Because, they believe that they, through their shared language, will not only shortened the gap of mistrust between Afghanistan and Pakistan but they can use it in rebuilding the ties, also[2]. This time, Pakistan, through Pashtun leaders, tried to rebuild its ties with Afghanistan; in the case, it, from a while, makes efforts to reinitiate the peace process and rebuild the ties between both countries.

A few days ago (11/25/2015) a delegation consisted of ten members from three Pakistani nationalist parties attended Kabul as a result of the Afghan President’s invitation. Asfandyar Wali Khan, leader of the Awami National Party, Afrasyab Khattak, Dr. Saleem Khan (Son of Afzal Khan Lala), Mahmood Khan Achakzai, leader of Pashtunkhwa National Awamy Party, Aftab Ahmed Khan Shirpao, leader of Qaumi Watan Party, Shawkatullah Khan, former governor of Pashtunkhwa, Ayaz Wazir, former Pakistan’s ambassador to Afghanistan and a number of other personalities were among this delegation. This delegation participated in a conference in Kabul that was praising the memorial of Afzal Khan Lala; briefly, the aim of this visit was to rebuild the ties between Kabul and Islamabad.

Politically, the visit of this delegation was very important to Pakistan due to following reasons:

First: Kabul-Islamabad ties, after the establishment of the National Unity Government (NUG), are worse than compared to every other time.

Second: Since a month, Kabul is making efforts to rebuild its ties with New Delhi. Haneef Atmar, National Security Advisor to Afghan President went on an official visit to India and the Deputy Foreign Minister; Hekmat Khalil Karzai had also a visit to India. Both afghan officials requested India to provide military assistance as well as to implement the bilateral strategic agreement.

Third: This visit was important because it was paved the way for a meeting between Nawaz Sharif and the Afghan President in Paris and, it was a chance for Pakistan to ensure the presence of Afghan high officials in the Heart of Asia-Istanbul Process Conference that is going to be held in Islamabad in next week; because if the Afghan high officials did not participated in this conference, it would impact Pakistan very negatively.

Leaders of Pakistan’s nationalist parties had brought the message of Pakistani premier, Nawaz Sharif to Afghan president and had requested him to meet Nawaz Sharif at the sidelines of the international Climate Change conference. The meeting with Pakistani PM was not included in the agenda of Afghan president; but after Pakistan’s nationalist leaders visit to Kabul this meeting became a part of Afghan President’s agenda, Afghan officials said.

On 30 November 2015, both leaders, before meeting each other alone, met in a trilateral meeting consist of Afghan President, Pakistani and British Prime Ministers. After the trilateral meeting, the Afghan President, Ashraf Ghani and the Pakistani premier, Nawaz Sharif held a bilateral meeting and talked about the relations between both countries. “Reinitiating the peace and reconciliation process was among their talking, also”[3]. Pakistani PM established the details of this meeting in a statement; the important points were as following:

The Future of Pak-Afghan Ties

The 70-year Pak-Afghan relations have seen a lot of ups and downs; however, distrust has covered these bilateral ties to a large extent. After the formation of NUG, the relations between Afghanistan and Pakistan unprecedentedly became better; but after insecurities increased in Afghanistan and the peace process became stalled, these relations, once again, went on distrust. Although, Pakistan, by using language diplomacy and the Pashtun card, once again, met the Afghan President, Ashraf Ghani at the sidelines of the Paris Climate Change Conference and invited him to the Heart of Asia-Istanbul Process; so, these efforts brought hopes for the peace process to become reinitiated and for the ties between both counties to become better.

It is worth mentioning that these meetings, conferences can play a vital role in rebuilding the bilateral ties; but the Pak-Afghan ties, in mid-term and long-term, to a large extent, are mostly dependable on the successfulness of the peace process and stability in Afghanistan; and whenever, Pakistan fell shorten in fulfilling its promises, the relations between both countries would automatically become worsen and besides that, the trust-building process would be faced with various challenges in the future ahead.