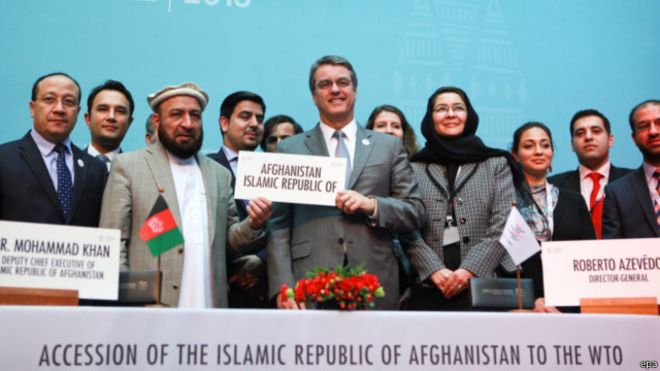 Afghanistan received the membership of World Trade Organization (WTO) at the 10th WTO ministerial conference in Nairobi, Kenya, December 17, 2015. Afghanistan is 146th in the world and 36th among the less developed countries that received WTO’s membership.

Receiving membership in this organization is a long process and Afghanistan, however, accessed this organization after 11 years of negotiations. This news has positive reaction in Afghanistan and the senior Afghan officials have warmly welcomed this development; Afghanistan is, however, among the least developed countries, and there are some expectations that the accession of Afghanistan to WTO would impact the newly emerged industries.

The Afghan policy toward WTO in past 11 years, the reason behind Afghanistan’s request to become a member of WTO and impacts of accession to WTO on the country are analyzed here.

The Background of WTO

After WII, the original intention was to create a third institution to handle the trade side of international economic cooperation, joining the two “Bretton Woods” institutions, the World Bank and the International Monetary Fund. Over 50 countries participated in negotiations to create an International Trade Organization (ITO) as a specialized agency of the United Nations. However, these negotiations failed, the draft ITO Charter was ambitious. It extended beyond world trade disciplines[1].

Meanwhile, 15 countries had begun talks in December 1945 to reduce and bind customs tariffs. With the Second World War only recently ended, they wanted to give an early boost to trade liberalization, and to begin to correct the legacy of protectionist measures which remained in place from the early 1930s.

As a result of these negotiations, the new General Agreement on Tariffs and Trade was born, with 23 founding members (officially “contracting parties”) in Geneva in 1947.

For almost half a century (1994), the GATT’s basic legal principles remained much as they were in 1948, and several other meetings were held on further decreasing tariffs and for other relevant issues. For example, in 1960s, the Kennedy Round in the mid-sixties brought about a GATT Anti-Dumping[2] Agreement and a section on development. The Tokyo Round during the seventies was the first major attempt to tackle trade barriers that do not take the form of tariffs, and to improve the system. The eighth, the Uruguay Round of 1986-94, was the last and most extensive of all. It led to the WTO and a new set of agreements.

Essentially, the WTO is a place where member governments go, to try to sort out the trade problems they face with each other[3].

The basic difference between GATT and WTO is that the GATT dealt with trade in goods; but the WTO deals with trade in services and intellectual property as well.

Chronology of Afghanistan’s membership in WTO

Following the official request from Afghanistan, WTO established a Working Party, consisted of 28 countries and led by Netherland, for Afghanistan in December 13, 2004. Among those 28 countries, most of them were those having trade ties with Afghanistan; like its neighboring countries (China, Pakistan and Tajikistan), India, Japan Russia, Saudi Arabia, the European Union (EU) and etc.

Afghanistan presented its Trade Policy report (Memorandum) on March 31, 2009, and the questions and replies were sent on July 26, 2010.

Also, Afghanistan had trade-related negotiations with other members of WTO and had an agreement on it. Eventually, the Working Party presented its finalized report to WTO on 13 November, 2015 and, finally, Afghanistan received membership after Afghan First Deputy Chief Executive Mohammad Khan signed the protocol of this organization at the 10th WTO ministerial conference in Nairobi, Kenya, December 17, 2015.

Generally, the aim behind Afghanistan’s membership in WTO was that Afghanistan would develop economically and it would receive a lot of trade-related freedoms and privileges. Its trade-and-transit-related problems would solve and it would be able to attract foreign investment[4].

Afghanistan, in order to receive the membership of WTO, brought some reforms in the fields of trade, economy and investment and has signed 9 bilateral agreements related to goods and 7 others related to services.

Afghanistan will join the Information Technology Agreement (ITA) upon accession into WTO. This agreement will ask all the participants to completely eliminate duties on IT products covered by the ITA Agreement. Afghanistan’s export tariffs will also be bound for 243 tariff lines. Of these, 29.6% are bound at 10%, 24.2% are bound at 2.5%. On services, Afghanistan has made specific commitments in 11 services sectors, including 104 subsectors[5].

Positive and Negative impacts of Afghanistan’s membership in WTO

[2] In economics, “dumping” is a kind of predatory pricing, especially in the context of international trade. It occurs when manufacturers export a product to another country at a price either below the price charged in its home market or below its cost of production. The purpose of this act is sometimes to increase market share in a foreign market or to drive out competition.

[7]  A subsidy is a form of financial aid or support extended to an economic sector (or institution, business, or individual) generally with the aim of promoting economic and social policy. Although commonly extended from Government, the term subsidy can relate to any type of support – for example from NGOs or implicit subsidies.