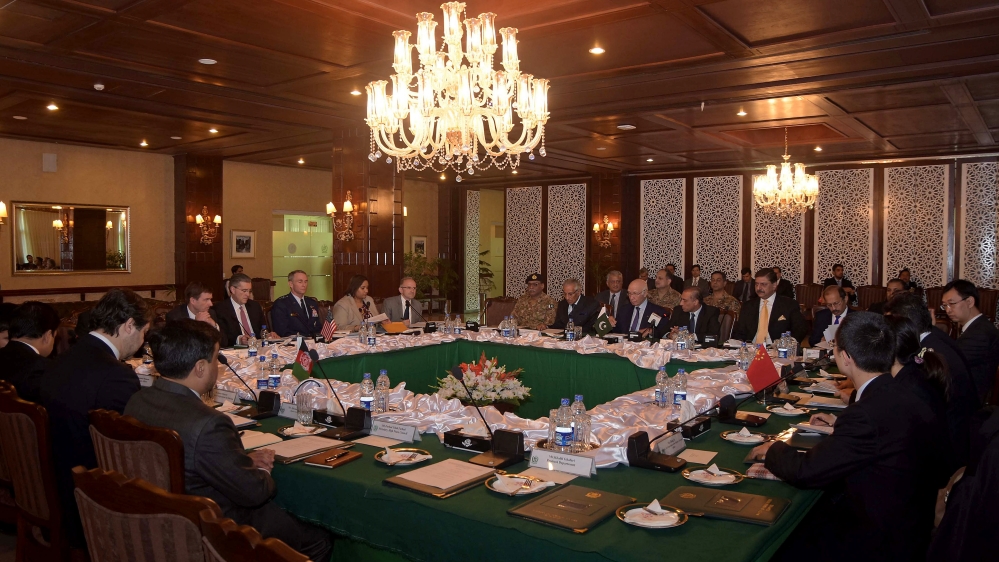 The quadrilateral meeting regarding Afghan peace process was held in Islamabad on Monday, 11 January 2016. At the meeting, the representatives of four countries Afghanistan, Pakistan, the United States of America and China gathered to discuss “The Road Map” to peace process; at the end of the meeting, they all agreed to continue the negotiations in this area on a regular basis.

The next meeting of the negotiations is scheduled to be held on 18th January in Kabul which will be attended by the representatives of Afghanistan, Pakistan, the United States of America and China. It is said that after the second meeting in Kabul, the face to face talks between the Afghan government and the Taliban will begin.

From bilateral talks to quadrilateral negotiations

After the establishment of the National Unity Government (NUG), Ghani came with a policy to approach Pakistan in order to achieve peace in his country. The mediation of Pakistan in peace talks between the Afghan government and the Taliban during the last one year has passed through the following stages:

The Murree Talks: The second meeting of the negotiations with the mediation of Pakistan was held in Murree close to Islamabad in which the official representatives of The Taliban had participated for the first time. Although, the Taliban did not officially confirm their participation in the meeting but in their statement, which was released then, they also did not deny it.[1]

Briefly, after the disclosure of the death of Mullah Mohammad Omar the talks become stalled. After the failure of the peace negotiations with the Taliban and happening of the several bloody explosions in Kabul, once again tensions appeared in the relations between the two countries.

Regional diplomacy: After the halt of the peace process, Pakistan came under pressure. That is why Pakistan’s Chief of Army Stuff, Prime Minister, and the National Security Advisor of Pakistan were forced to talk about the efforts of their country about the revival of peace process. At the same time, regional diplomacy also began moving to resume the Afghan peace process and the special envoys of the United States of America, China and the United Nations for Afghanistan and Pakistan in their visits to Pakistan also emphasized on the revival of the peace talks.[2]

Pakistani efforts for the revival of peace talks: Pakistan used the “language” diplomacy to improve relations between the two countries and facilitate the resumption of peace talks. In this regard, Pakistani Pashtun nationalist parties’ leaders on their visit to Kabul on 25th November 2015 brought Pakistani Prime Minister Nawaz Sharif’s message to Ashraf Ghani to meet him on the sidelines of the Paris Conference on Climate Change in France.[3]

Nawaz Sharif met Ashraf Ghani on the sidelines of Paris Conference and invited him to Islamabad to participate in the Heart of Asia Conference. The Heart of Asia Conference and the participation of Ashraf Ghani in this Conference were considered to represent a new impetus to relations between Afghanistan and Pakistan. The quadrilateral peace talks among Afghanistan, Pakistan, the United States of America and China was planned on the sidelines of the conference in order to find a way to initiate the Afghan peace negotiations and Pakistan’s purpose from this plan was to gain the trust of the Afghan government back.

Initiation of the Quadrilateral Talks

This time in the peace talks of Afghanistan, the United States of America and China, as two powerful countries that have important role in the region, are participating in the negotiations and without any doubt can have a fundamental role to encourage the involved parties to take effective steps.

One of the objectives of the Afghan government in this negotiation is that the promises of Pakistan to Afghanistan about peace should be guaranteed on behalf of a third country (China). China has recently expressed its preparation to cooperate in peace talks of Afghanistan and due to its influence and relations with Pakistan and the Taliban the country has been able to pave the way to the meeting of negotiating representatives.

After the improvement of the relations of Kabul-Islamabad the quadrilateral negotiations of peace in Afghanistan started and the first meeting of these negotiations was held in Islamabad with the participation of the representatives of the four countries.

According to the statement released at the end of the meeting, these negotiations will be followed with a meeting on 18th January in Kabul. In this statement, they have emphasized on the need to start direct talks between the Afghan government and the Taliban.

The outcomes of the first Quadrilateral Meeting

The fact that the meeting of Islamabad had no other outcome except the agreement about the holding such meetings on regular basis and setting the date of next round of negotiations, has caused the later concerns to overcome the initial hopes about the process.

After the first quadrilateral meeting two types of disputes appeared, which are yet in its initial stage. First, disputes about those who will not participate in the peace process and the second, the disputes and contradictions within the Afghan government.

Afghanistan-Pakistan disputes: the change in the positions and expressions of Afghan and Pakistani officials indicates the lack of agreement and harmony between them. Afghan government says that it is trying to separate those who are willing to participate in the peace negotiations from those who are not willing to participate. However, Pakistan considers such expressions as obstacles on the way of peace and emphasizes on the need to “build trust” in order Taliban joins the peace process.

Internal disputes of the NUG: before holding the quadrilateral meeting in Islamabad the spokesman of Executive Office had said that Pakistan will provide Afghanistan with the list of those who will participate in the peace talks and those who are not willing to participate. While such a list was not handed over to Afghanistan and Hekmat Khalil Karzai after returning from Islamabad in his press conference said that they did not expect such a list from Pakistani side.

Earlier, rumors were heard that Pakistan will once again bring people like Mullah Hassan Rahmani, Mullah Abdul Razaq, and Mullah Jalil who do not have any influence in the ranks of the Taliban to the negotiations table in the ongoing quadrilateral negotiations.

Pakistan’s Express Tribune newspaper which mostly publishes news about the Taliban, in one of its reports has said that Mullah Abdul Razaq and Mullah Hassan Rahmani who have refused to pledge its allegiance to Mullah Akhtar Mohammad Mansour after the announcement of the death of Mullah Mohammad Omar are expelled from the Taliban’s leadership council. These two were part of the delegation who visited the representatives of the Afghan High peace Council (HPC) in Urumqi in China. Taliban had also inducted three non-Pashtuns from the other ethnic groups of Afghanistan in their leadership council. Mullah Abdul Rahman, from the Uzbek tribe, Sheikh Sharif from Tajik and one person from the Turkmen ethnic group has been recently inducted in to Taliban’s leadership council. Expelling these people from the leadership council of Taliban shows that such people do not represent the group.

Although Reuters quoted[4] the Assistant of Sirajudin Haqani (Assistant of Mullah Akhtar Mohammad Mansoor) that Taliban will participate in the negotiations under the leadership of Mullah Akhtar Mansoor and has even said that Sirajudin Haqani is personally interested to participate in the negotiations, but official spokesmen of the Taliban has not yet said anything in this regard.

On the other hand Taliban has recently been divided into two groups, if one of the groups showed willingness to participate in the negotiations; the other group will never do that.

The future of the peace negotiations

The success of quadrilateral peace talks of Afghanistan is mostly related to two issues:

First: if the Taliban did not participate in the peace negotiations, how will they be treated?

The participants of these negotiations have not yet concluded that if the Taliban was not participated the direct negotiations, how they should be dealt with? Afghan government insist on fighting and use of force, as the acting minister of Defense said that, the group of armed opposition of Afghanistan who are irreconcilable and do not join the peace process, will be suppressed by the Afghan Security Forces and Hekmat Khalil Karzai, deputy of Ministry of Foreign Affairs, returning from Islamabad has also said that the government will deal with those who are not willing to join the peace process, based on a common understanding with Pakistan, America, and China. But Pakistan opposes this opinion and yet there are differences between the opinions of Afghanistan and Pakistan.

Sartaj Aziz, senior advisor to the Pakistani Prime Minister on the opening of the meeting of Islamabad emphasized on trust building and said that the preconditions should be removed and that the threat to attack the irreconcilable groups will not impose peace talks on all groups.

Second: Which group of the Taliban will participate in the peace negotiations?

If the government of Pakistan, as a result of pressure on the Taliban, became able to bring the members of Taliban’s political office in Qatar, or members of the Taliban leadership council led by Mullah Akhtar Mohammad Mansour, or members of the Haqqani Network to the peace process; this process will be successful and the results of the negotiations will be promising. But if some other people participated in the peace process as representatives of the Taliban, the outcome of these negotiations will be the same as HPC’s and without any achievement.

If we look at the recent position of the Taliban, it seems that the Taliban are sensitive to the peace talks under the pressure of Pakistan that is the reason why they have expelled those who have already represented them in such negotiations from its leadership council.

On the other hand, the Taliban are divided into two groups in recent months and the split among the group has casted a shadow over the upcoming talks which is making the actual peace negotiations more difficult. So, if the Afghan government faces the people as representatives of the Taliban, who are not affiliated with the Taliban, such negotiations will have no achievement for Afghanistan.

Further efforts to resume the Peace Talks starts at a time the violence in Afghanistan is increasing and the last year after the departure of a large part of the foreign forces in late 2014, was one of the bloodiest years in Afghanistan.

On the eve of the withdrawal of Soviet troops from Afghanistan, the quadrilateral conference was organized in Geneva in order to secure peace in Afghanistan, among the United States of America, Pakistan, the government of Kabul and the Soviet Union was and marked an ominous future for Afghanistan. At that quadrilateral meeting, no representative of the Mujahedeen had participated, in fact, Pakistan represented them. And now once again, these four countries, are supposed to decide about peace talks of the Afghan government with armed oppositions in the absence of the Taliban and approve solutions for peace in Afghanistan.

However, one of the objectives of these quadrilateral negotiations is to begin direct negotiations between the Afghan government and the Taliban and the current quadrilateral negotiation is starting with a difference with the Geneva Conference that there is also a small probability of face to face talks after two or three meetings; but, if it did not happen and the meetings went on without the presence of the Taliban, these meetings will also have no achievement as same as the Geneva Conference, and the case of war and peace will become even more complex.

Generally, these negotiations will be accompanied with hopes but until the real will for peace parties is not yet created, these efforts will not come to a conclusion except wasting the opportunity.