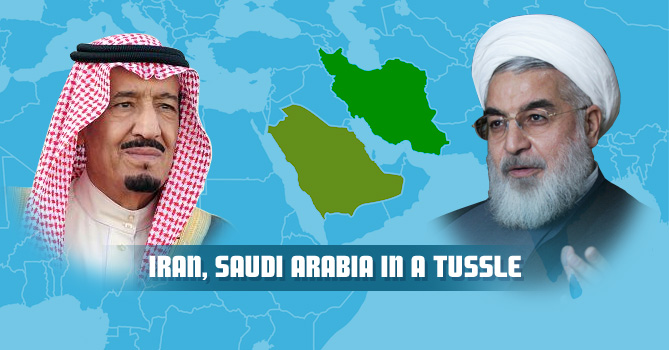 Before the beginning of 2016 it was predicted that in the new year the Saudi-Iran relations will improve, and they will come to an agreement regarding the crisis in Syria; because they have been prepared to come to the negotiation table in relation to the Syrian crises, but the first week of 2016 annihilated these hopes.

In the middle of the crisis in the Middle East the Executive Officer of Afghanistan Dr. Abdullah Abdullah went on his three day visit to Iran and later the Afghan government released a statement in which Kabul’s position was rather impartial.

What is the direction of the crisis and cold war in the Middle East? What will be its impacts on the region and Afghanistan? And what will be the impacts of the visit of Afghan CEO to Iran on bilateral relations? We will analyze it in this weekly analysis.

The cold war in the Middle East

In the last years of the cold war when the Islamic revolution was succeeded in Iran, beside the ideological competition in the region, the religious competition also started. From there on, Iran was involved into a long war with Iraq.

The Islamic revolution in Iran effected the division of power in the region and divided the region into two regional blocks, in which the allies of Iran were the Hezbullah of Lebanon and Hafez ul Asad of Syria, but the list of the allies of the Saudi Arabia was longer than that of Iran’s, in which Egypt, the Gulf countries and other Arabic countries included.

Saudi Arabia which was a US ally during the cold war, learning from the experience of the US and following the example of “Truman doctrine” tried to present its own special doctrine against Iran and thus surrounded Iran in its neighborhood and make it obedient. In this purpose the Saudi Arabia supported its strategic ally Pakistan and from there it supported Afghan Mujahedeen whose success was tied with the Saudi assistance.

Middle East: the place of crises

If we look to the last one century, we will notice that the Middle East is the place of crises. At the beginning of the last century the Ottoman Caliphate collapsed and the new states were formed instead; in the Second World War the Middle East became part of the war as same as the First World War.

At the beginning of the cold war the state of Israel was formed and went to three major wars with Arabic nations in 1948, 1956 and 1973. During the Arab-Israel war of 1973, the oil prices increased by Arabs and as a result the inflation occurred in the world, which is still known as “1973 economic crisis”. In addition the barbaric behavior of Israel in Palestine also opens the way to the crisis in some occasions.

At the end of the cold war the Gulf war began in the Middle East, and then in 2003 the US attacked Iraq reasoning that the country possessed biological and chemical weapons and then indirectly provided the way to the emergence of ISIS in the country.

In the ongoing decade, Arabic spring emerged, and started from Tunis soon reached to all Arab regions. The spring overthrow the tyrant governments in Tunis, Libya and Egypt but then in Libya it was superseded by civil war and in Egypt the first democratic government was collapsed by the Army with the help of some regional countries.

In 2011, in Saudi Arabia some Shiites were also upraised in the south of the country under the name of Arab Spring in which Sheikh Nemir also took part, Saudi considered the Iranian hand behind the uprising of Nemir and became afraid of the Arabic spring and considered it as a threat to Saudi regime. That is why Saudi Arabia played an important role in the collapse of Morsi’s government in Egypt.

Why the Saudi-Iran relations became fraught with tensions?

In general, since 1979 the Saudi-Iran relations were fraught with tensions. The major reasons of the conflict between Saudi and Iran are regional competitions and the religious difference of Sunnite and Shiite. Both sides have supported the enemies of each other against each other.

Nowadays the Saudi-Iran relations are mostly about regional competitions and the issue of Sunnite and Shiite. Iran’s interests mostly lies in a Syria under the domination of Bashar al Asad and with the Houthis in Yemen. On the other hand Saudi is widely helping the oppositions of Bashar al Asad and airstrikes on houthis were also due to the same concerns so that from one hand it should not come under Iranian containment and on the other hand the way of uprisings in the south of Saudi should not get a chance.

The Saudi-Iran relations also deteriorated after the incident that occurred during the Haj and senior officials of Iran seriously criticized this incident.

On 2nd January 2016 Saudi Arabia executed 47 people in twelve different places which most of them were members of Al Qaeda network and Sunnites and a little sum of them were Shiites, among them there was a prominent Shia scholar as well. At the same day in Iran the protestors first burned the consulate of the Saudi Arabia in Mashhad and then the Saudi embassy in Tehran.

Saudi in response to burning its embassy in Tehran broke its relations with Iran, and ordered the Iranian ambassador in Saudi Arabia to leave the country and cut off its trade and aerial relations and thus after the Iran-Iraq war it is the first time that Saudi-Iran relations become such fraught with tensions.

Kabul’s position in tensions between Iran and Saudi

After the crisis in Yemen, Afghanistan has held an impartial position in tensions between Iran and the Saudi Arabia and has considered the cutting off ties between the two countries as having bad impacts on Islamic countries, this is a very good decision because Afghanistan needs to be impartial due to its internal and external interests.

Millions of Afghan immigrants live in Iran, and Iran’s Chabahar port will free our transit from political pressure and being at the hands of one country. And also thousands of Afghans are working in Saudi Arabia and send a great amount of money to Afghanistan every year.

The impacts of Saudi-Iran tensioned relations on the region and Afghanistan:

The Middle East is divided into two blocks: however even before the growth of tensions between Saudi and Iran, due to the situations in Syria and Yemen the region was divided into two blocks and each block had its own international supporters. But the recent break in Saudi-Iran diplomatic relations deepened the conflict further. Bahrain, Kuwait, Sudan and Somalia followed the Saudi Arabia footsteps and cut their diplomatic relations with Iran, and the United Arabic Emirates (UAE) due to its commercial ties with Iran did not cut its relations, but lessened it to its low levels.

The crisis in Syria will last even longer: Before the current conflict and tensions in Saudi-Iran relations both had almost agreed to set around the negotiation table regarding Syrian conflict. The armed oppositions of Basharul Asad in Saudi had also showed readiness to solve the Syrian crisis through negotiations; but due to tensions between Saudi and Iran it looks like that its first victim will be Syrian crisis. That is the reason why the representative of the United Nations wants to visit Saudi and Iran so that their conflict does not over shadow Syria.

Its impacts on the price of oil: Middle East is the world’s richest region of oil reserves and produces the greatest amount of oil in the world. Iran and Saudi are the founders of OPEC (Organization of the Petroleum Exporting Countries) and the competitions between the two countries affect the price of oil. These affects are two ways:

First: the prices of oil increases: Conflicts or war in the Middle East effects oil supply and thus the price of oil increases. In 1973 during the war between Saudi Arabia and Israel the oil prices had increased and after that in most of the crisis which were not under the influence of the Saudi-Iran conflicts the oil price increased.

Second: the oil prices decreases: Most of the times in the Middle East when the Saudi-Iran relations become fraught with tensions, the Saudi Arabia which has great oil reserves uses it as a weapon and increases its daily oil supplies and thus the increased oil supply decreases the oil prices. The Saudi motive behind this is to hurt Iran economically.

Since 2004 it is the first time that oil prices has decreased so much, the price of one barrel of oil is currently 34.65 US dollars.

Increasing the sectarian wars: in the countries where both Sunnites and Shiites live, the deep Saudi-Iran conflicts will also influence them.