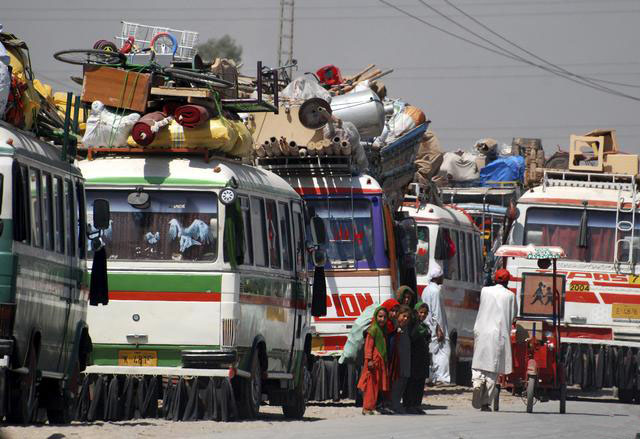 Recently the issue of Afghan Refugees in Pakistan is warm because of two reasons:

The issue of repatriation of Afghan refugees by Pakistani government got warm once again after the attack on a military school in Peshawar. Pakistan changed its policy towards the religious fundamentalists, and the Pakistani Prime Minister Nawaz Sharif summarized its policy, which one of those was the repatriation of Afghan refugees to Afghanistan.

The Stages of Afghan Refugees to Pakistan:

Because of civil wars in the country, Afghans started migrating to other countries during last few decades, which its process to Pakistan started in 1973, which will be briefly discussed as below:

First stage: the first stage of migration of Afghans to Pakistan started before the operations of Islami Nahzat in 1354 solar year, approximately 300 Afghans migrated to Pakistan at that time.

Third Stage: During the Russian invasion of Afghanistan (1979 to 1989), there were more than three million Afghan refugees in Pakistan.

Fourth Stage: Though with the withdrawal of the Soviets from Afghanistan, many Afghan families returned to the country, but with the beginning of civil war in the country, many more migrated to Pakistan.

Fifth Stage: After the incident of 9/11 of 2001 and the U.S. invasion of Afghanistan, some Afghans migrated to Pakistan in order to be safe. However, when the Bonn Conference established interim administration in Afghanistan, approximately 3.2 million Afghan refugees from Iran and Pakistan returned to the country. [2]

With the cooperation of UNHCR the registration of Afghan refugees in Pakistan started in 2007, through which 1.7 Afghan refugees were registered, and Pakistan has given those Identity Cards of (Afghan citizens). Those ID cards were renewed in 2010, 2012, and 2014, which the current cards will expire at the end of the current (2015) year. This issue had increased the discussions in Pakistan that the current cards should not be renewed, but they have to be sent back to their country.

The Reasons of Migration to Pakistan:

There are mainly two reasons for migration and taking asylum in other places:

If we pay attention to the modern political history, those places that face conflicts, especially Muslim World, the number of migration in those places increase day by day.

Meanwhile there are push factors or pull factors for the process of migration, which most of the factors in Afghanistan are push factors. The reasons that forced Afghans inside Afghanistan to leave their country and migrate to other countries are namely:

However, there are yet some reasons that Afghan refugees do not want to return to their country, which are namely:

The Number of Afghan Refugees in Pakistan:

Most of the refugees in Pakistan are from those provinces, which can be called war-suffered provinces: like Ningarhar, Kunar, Lugar, Paktia, Laghman, Kandahar, and Helmand. (See the table for more information)

The returned refugees in 2015 and their conditions here:

There are not reliable statistics to show the exact number of Afghan returned refugees from the beginning of 2015, and no organization has done survey about it; but there are researches done about the return of undocumented refugees.

Based on a new survey done by International Organizations for Migration, since January 1 of 2015 up to the 14th February of the same year approximately 35,889 undocumented refugees had returned to the county because of the changing conditions of Pakistan.  Many of them (36 %) are in Ningarhar Province, especially in Jalalabad City, and the rest of them are residing in Kunar, Laghman, and Kabul. This number is more than the overall return of the refugees in the entire 2014 year. In 2014, there were approximately 21,692 refugees returned, and 3,754 were forcefully returned by Pakistan; but only in these two months, there were 2,204 refugees forced by Pakistan to return to Afghanistan, and more than 32 thousand refugees returned by their own interest.

Half of these returned refugees are living in the houses that they rented, and most of them are concerned about the education of their children. They are also concerned about resuming works and businesses[7]; it is in such a condition that even before their return there was 30 % unemployment in Afghanistan.

Number of Undocumented Returnees in 2015 (Torkham)

Return of undocumented Afghans from Pakistan (Update as of 16 February 2015) by International Organisations of Migration, Kabul.

Return of undocumented Afghans from Pakistan (Update as of 16 February 2015) by International Organisations of Migration, Kabul.

The Policy of Afghan Government for the return of Refugees:

Afghan refugees create a huge number of Afghan Nation, without the existence of the Afghan refugees Afghan nation will be incomplete, but there are also skilled, educated and well trained people within these refugees and they can play an important role in the development of the country; but currently Afghanistan is not economically ready to accept a huge number of Afghan refugees from Pakistan, Iran, and other countries. Therefore, Afghan President in his speech to the Upper House said that Afghan Refugees create a massive number of the nation and without their existence, Afghan nation is not complete[8].

The CEO of the national unity government Abdullah Abdullah told media that very soon, the government will take decision about the Afghan refugees, and a delegation will be sent to Pakistan about this issue[9].

The new Minister Alami Balkhi had also said in a speech that return of Afghan refugees is in the priorities of the new government, and he further added; “the desire of Afghan government is that the Pakistani Government should stop forcing the refugees to return back to Afghanistan and their return should be gradual, so the Afghan government will be able to welcome them with honor and provide opportunities for them.”

To summarize, Afghan government want to return Afghan refugees as below:

Afghan side also hope that the ID cards should be renewed, because Afghan government need time for it and immediately it is not ready to accept such a huge number of refugees and provide facilities for them[10].

[5] Daily Times, Afghan refugees can legally stay in Pakistan Until end of 2015, see it online:

[6]  .With all the registration forms and documents, yet Afghan refugees are abused by the police of Pakistan and their houses are searched and they are terrified by them, for more information read the article of Azadi radio.

Read the second report about it:

[7] International Organisations of Migration, Return of undocumented Afghans from Pakistan (Update as of 16 February 2015) See it online:

[10] Interview with the secretor of the Ministry of migration and refugee affairs of Afghanistan.