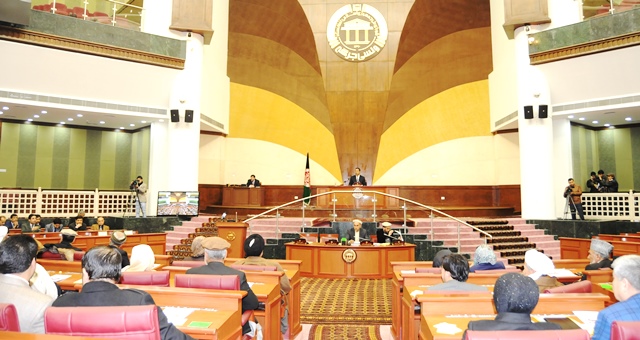 The Afghan President Ashraf Ghani opened the meeting of the sixth year of the 16th round of the Afghan Parliament after the winter vocations last week.

The background and the power of the Parliament in Afghanistan, the current conflict and non-coordination between the government and the Afghan Parliament, its activities in the past year and challenges ahead are the issues which we have tried to analyze here.

The background of the Afghan Parliament

The first Parliament in Afghanistan (named the “state council”) was formed under the umbrella of the first Afghan constitution which was written during Amanullah Khan’s reign in 1302 (1923), later at the time of the Nader Khan in 1307 (1930) its name was changed to “Parliament” and was unicameral with 38 members.

In 1309 (1930) the Afghan Parliament became bicameral and the two houses were called (Wolesi Jirga) (Lower House) and (Meshrano Jirga) (the Upper House). This Parliament began its work in 1310 (1931). Until 1965 the members of the both houses were being appointed by the government but in 1343 (1965) and after the new constitution was approved, the Parliament was considered to have specific powers and also the members of the 12th round of the lower house were elected by the people.

After the “Democracy Decade” (1963-1973); until the collapse of the Taliban regime no such election was held; but in 2001 when the US attacked Afghanistan and the Afghan interim government was formed; the new constitution was approved for the country and based on the new constitution Parliamentary election was held in 2005 and 249 members were elected to Wolesi Jirga.

The powers of the Parliament

Decision about summoning ministers, the state budget and development programs, and approval or rejection of the appointments are the special authorities of the “Wolesi Jirga”. Parliament and particularly “Wolesi Jirga” have vast legislative authority and in this regard the executive branch can only propose bills.

Wolesi Jirga did not have any remarkable achievement last year. The achievement of “Wolesi Jirga” which was presented at the final meeting of 1394 were as follows: holding 51 general sessions, 2 impeachment sessions, 15 summon sessions, 3 hearing sessions and 30 ordinary sessions, passing 39 ratifications and 10 bills, approving 9 agreements, abrogating 7 legislative decrees and approving the 1395 annual budget [1].

Setting the salaries of the governmental officials, approval of the members of the judicial branch and passing the telecommunication tax bill were also in the list of the house’s activities.

Wolesi Jirga also approved the bilateral security agreement with United Arab Emirates, the military cooperation agreement between the Afghan Ministry of Defense and China, and the agreement of the Islamic Cooperation Organization’s convention.

The problems faced by Wolesi Jirga in 1394

Wolesi Jirga faced various problems last year, the most significant of which are as follows:

Legislation: legislation is one of the three significant duties of the Parliament. According to the Article 90 of the Afghan constitution, the Parliament has the authority to ratify, modify or abrogate the government’s bills and legislative decrees. In 2015, Wolesi Jirga has not taken any innovative step in the legislation area and has only reacted against the government’s bills. Thus from all its authorities in the legislation area Wolesi Jirga has only implemented its authority to ratify or abrogate the bills.

Summoning ministers: in the past year, differences between the National Unity Government Officials also divided Wolesi Jirga into two parts and the summon meetings were also disorganized.