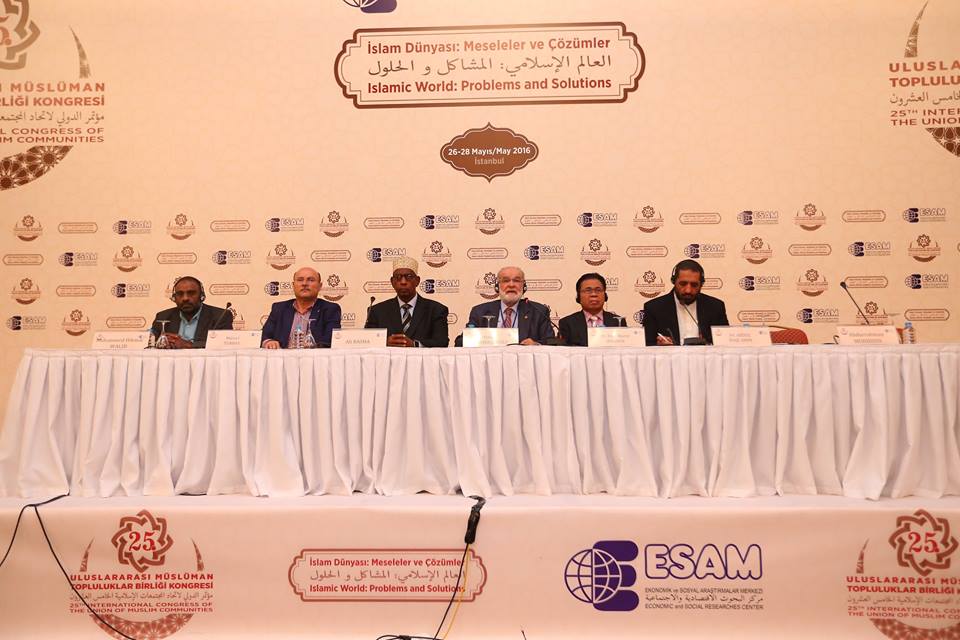 Twenty fifth International Congress of Muslim Communities’ Union was convened by the Turkish Economic and Social Research Center (ESAM) from 26 to 28 May, 2016 in Istanbul, Turkey.

The three day international conference was on “Islamic World; Problems and Resolutions” where 149 representatives of world’s Islamic movements and research centers of Muslim world had participated from 59 countries.

The chairman of the Center for Strategic and Regional Studies (CSRS) Dr. Abdul Baqi Amin had also attended the conference from Afghanistan due to official invitation by the organizers of the conference.

In this meeting, the participants emphasized on Necmettin Erbakan’s scheme about building a group of eight Muslim countries as a solution to the economic problems of Islamic countries; and the lack of single monetary unit has been declare as a reason to link Islamic countries with other countries.

The other meeting of the conference was appropriated to women issues and some Muslim women from Europe, Africa and America shared the experiences of Muslim women’s participation in those communities.

The ending meeting of the conference was about presenting solutions and in this regard, a number of participants offered their proposals.

Dr. Abdul Baqi Amin presented his paper on “the way forward to Islamic world’s problems” on behalf of CSRS-Kabul.

Dr. Amin termed the internal conflicts of Islamic countries as a major problem of Islamic world and said that these conflicts hamper the progress of Islamic communities and are the outcome of the improper policies of western countries’ politicians. According to him we have to learn lessons from the experiences of countries like Egypt, Tunisia, Morocco, Sudan and etc.

Mr. Amin also said: “War has negatively affected all aspects of society in Afghanistan, from governance to healthcare, education, economy and etc. Afghanistan’s import is 96% while its export is only 4%, and the country is also in a bad situation in other aspects of the economy. On the other hand 300 thousand people are killed in Afghanistan because of the war in the past 15 years.”

According to Dr. Amin all these ordeals were due to the continuation of war in Afghanistan and however all parties are fatigued of war, but lack of a mediator to reduce mistrust between the engaged parties has resulted the failure of the peace process in the country. He said that Islamic countries must play their part to put an end to the ongoing war in Afghanistan.