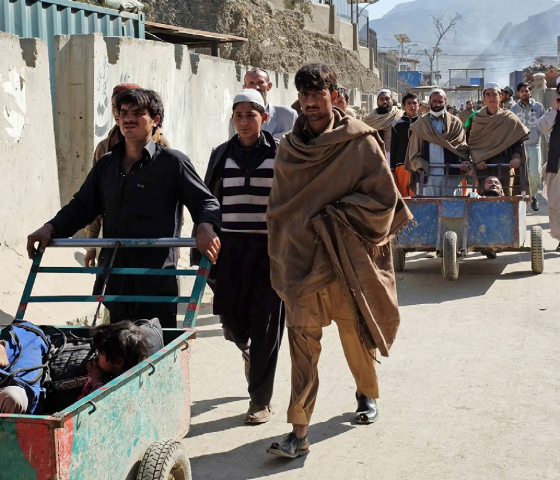 After attacking the military school in Peshawar of Pakistan in December 2014 the issue of Afghan refugees in Pakistan became serious, and Pakistan changed its policy toward Afghan refugees there. After the peace process this issue is also important for Afghan government, because the Pakistani police forced Afghan refugees and as the result a huge number of them returned back to the country. As the result, the Afghan Refugee and Immigration Minister Sayed Alemi Balkh has gone on a long trip to Pakistan, and CEO Abdullah Abdullah also want to go on a trip to Pakistan regarding this issue.

The Process of Return of Afghan Refugees (January-March)

Reference: The International Organization for Migration

With the last attack in Peshawar, the life of Afghan refugees in Pakistan also became miserable. Pakistan called it 9/11 of Pakistan and Pakistani Prime Minister Nawaz Sharif changed its internal policy and summarized it in 21 points called “National Action Plan”. The return of Afghan refugee is also included in those 21 points.

Nawaz Sharif did not answer the question that why are Afghan refugees involved in “National Action Plan” of Pakistan; but there are rumours that Pakistan believes that Afghans were involved in this incident. Some Pakistani media broadcasted news that two out of the six attackers were Afghans[5]. With all those claims the high ranking officials did not accept such news.

In the trilateral conference[6] held in Pakistan it is decided that unregistered Afghan refugees will be registered within upcoming four months; but they did not say anything about the extension of the Afghan Citizen cards of the registered refugees. The return of all registered and unregistered Afghan refugees to the country up to the end of 2015 seems to be challenging, and at the end of the year they will stay jobless, homeless and without any future (as the ones in 2012) [7], or that time their cards dates may extend for a short term.

Ashraf Ghani, in his first speech to the Upper House, clearly said that Afghan refugees are an integral part of the Afghan Nation, and if those refugees do not return to the country, the nation will not be completed[8]. CEO Abdullah Abdullah also has a similar idea and he may have a relevant trip to Pakistan very soon.

As the result of the reports about the cruelty of Pakistani Police and the return of more than 50,000 Afghan refugees to the country in last two months, the Refugee and Migration Minister Alemi Balkhi has gone to Pakistan to solve this issue.

Afghan delegation has met with the prime minister, advisor of the foreign affairs and governor of Khaibar Pashtonkhwa of Pakistan, and it also participated in a trilateral conference regarding refugees. It is reported that the second phase of the conference between Afghanistan, Pakistan, and UNHCR will be held in Geneva.

Impacts of the refugees issue on bilateral relations:

It is beneficial for both the countries to solve this issue by cooperating each other; on one hand Pakistan will increase its soft power in Afghanistan, on the other hand, the Afghan government will not come under economic pressure, and Pakistan will also not suffer from economic loss.

[3] International Organisation of Migrations, return of undocumented Afghans from Pakistan, update as of 7th March 2015.

[6]  This decision was taken in the trilateral conference of Afghanistan, Pakistan and UNHCR, in which Sayed Hussain Alemi Balkhi participated.

[7]  In 2012 while the cards of Afghan refugees were expire dated, there was not any decision taken up to 2014, so the Pakistani police were hurting Afghan refugees.

[9] Many time the Refugee and Migration minister Alemi Balkhi said that return of refuges is one of the priorities of the National Unity Government. Read the interview of the minister with Farsinews:

Also read his views in the trilateral conference in Islamabad:

[10]  The views of Afghan Refugees and Migration Minister Alemi Balkhi in the trilateral conference of Islamabad:

For more information read the news of Azadi Radio, Balkhi: the return of Afghan refugees from Paksitan should be by-self and honourable exit, read it in the below link: