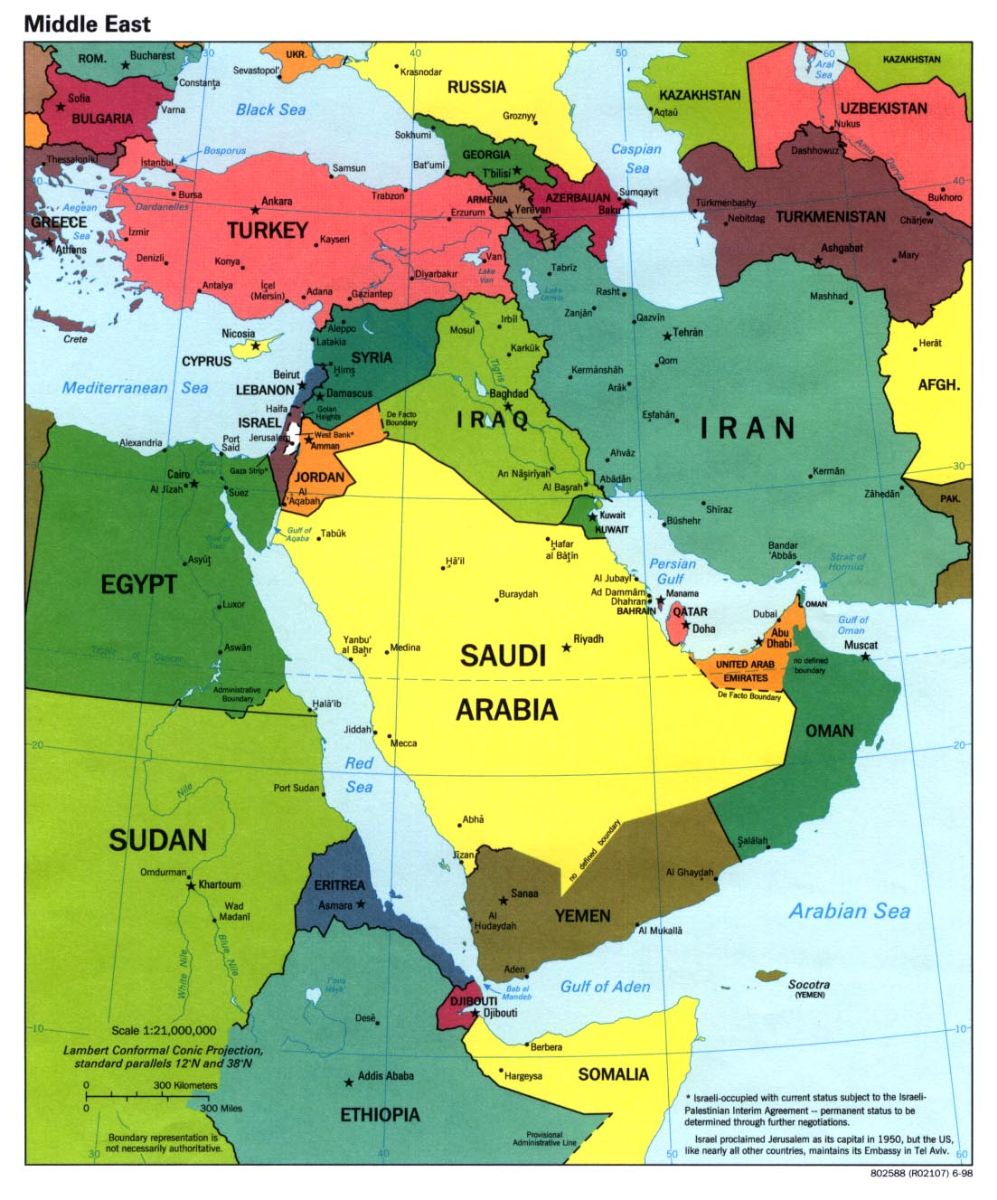 Middle East is the pivot of several problems after the World War I, and during the Cold War (1945-1991) or after this era; but recently lots of new events have happened, like the bloody and protracted civil war in Syria, overthrowing of Morsi’s government in Egypt, on-going violence in Iraq and the catastrophe of Palestine.

The latest events and the series of events under the name of Arabic spring, deeply affected the region and since some epochal revolutions are expected.

After Islamic revolution of Iran in 1979, beside the world ideological Cold War, the regional religious Cold War in Asia also started emerging. This Cold war emerged from the very beginning as proxy war. The Iran-Iraq War (1989-1988) disputed the region in two Sunni and Shiite blocs, and Syria’s civil war and recent Sunnis insurgence of Iraq are the latest example of such confrontations.

At the beginning of Cold War between Saudi Arabia and Iran, Iran entered to a bloody conflict with Iraq. Also Saudi and the Egypt under the leadership of Hosni Mubarak and Iran started supporting Hezbollah of Lebanon and Hafez al-Assad in Syria.

Saudi was supporting the United States of America during the Cold War, so attempted to use the experiences of United States and started using Truman Doctrine model, a policy by United States President Harry S. Truman to stop Soviet expansion during the Cold War, against Iran in order to control this country. Saudi Arabia therefore started partnership with its long-term strategic ally Pakistan and supported Afghan Mujahidin who were deeply dependent on Saudi Aid for their success.

This Cold War affected the Afghan civil war and short after the Taliban emerged in the power struggle arena, who opposed with Iran from very beginning; but oppositely Saudi supported them. This way this Cold War shifted to Afghanistan as well and affected politics in Afghanistan.

Syria and Iraq from cold to the warm war

In Middle East when The Arab Spring  uprisings began from Tunisia, on the one hand caused hopes for securing freedoms, but on the other hand raised concerns with authoritarian regimes, because it overthrew Qaddafi in Libya and Hosni Mubarak in Egypt. At the same time in Syria the nation started demonstration against the monarchy of Bashar al-Assad, and this war is going on from 2011 till now, and Saudi and Iran both are involved in this war.

Also in Iraq, after the withdrawal of US troops the security situation deteriorated and newly the ISIS (Islamic State) group has emerged both in Iraq and Syria and seriously caused concerns of the regional governments. This group of Sunni militants is well armed and equipped and combating Iraqi government of Nouri al-Maliki who isolated the Sunni population from the power arena.

Since the separation of Kurdistan from Iraq has also recently came to dialogues, the ISIS caused serious concerns with Iran, and there are speculations that Iran directly interrupted in the favor of Iraqi government; while Saudi Arabia has already warned the Iran, that interruption in Iraq’s internal affairs will have bad results for Iran.

The leader of Egypt’s Coup, new friend of Saudi

King Abdullah ibn Abdilazīz of Saudi Arabia and his friends (Kuwait and UAE) cracked down on their historical friends and soft power (Islamic movements) in Egypt. The elected president of Egypt was overthrown in a coup by Abdel Fattah el-Sisi and treated the Muslim Brotherhood very badly.

Soon after the establishment of new government in Egypt after the coup Saudi considered it as a legal government and King Abdullah recently visited Egypt for the first time after fall of Hosni Mubarak regime. This visit was also the first visit of a foreign official to Egypt.

King Abdullah committed billions of dollars in assistance with Abdel Fattah el-Sisi during the coup in Egypt, and committed to call a conference for economic development of Egypt in the region which will commit $20 billion. At all we can say that the close relations between Saudi Arabia and the new Egyptian government show the new direction of their friendship.

Falling of Hosni Mubarak regime in the result of widespread demonstration was good news for Iran and congratulated Mohammad Morsi for his presidency. However Morsi wanted equal relation with Riyadh and Tehran; but Saudi considered it as losing the Egypt of Anwar El Sadat and Hosni Mubarak in hands of their rivals, therefore started attempts to have it back.

The competition between Saudi and Turkey for leading Sunni World

Appointment of Ahmet Davutoğlu as foreign minister of Turkey brought about a change in the modern diplomacy of Turkey. He wrote a book about the strategic depth when he was professor of the university a few years back. In his book Davutoğlu has advised Turkish foreign relations experts to look for their strategic depth which he considers historical depth continued from their geostrategic location and Ottoman Caliphate.

After 2004, appointment of Davutoğlu as the foreign minister and closing of the doors of the European Union in the face of Turkey made them to pursue the very same philosophy. According to this philosophy the Prime Minister Recep Tayyip Erdoğan, give hand to the Saudi’s previous friends (Islamic movements) while King Abdullah of Saudi was no longer supporting them.

Turkey wants democracy in the Middle East; but Saudi’s king dynasty consider it as a danger to their rule. Turkey was hopeful for The Arab Spring but Saudi interfered in Yemen, Bahrain and Egypt in favor of their interests.

The power of this Cold War between Saudi and Turkey can be seen clearly in the statements of Erdoğan during the el-Sisi coup to his nation about King Abdullah of Saudi.

On the other hand another cold war is going on between Turkey and Saudi Arabia over the leadership of the Islamic world especially in the Middle East. Saudi uses the religion in this confrontation; but Turkey uses their economic growth and other soft powers.

Also the relations between Turkey and Iran are also not fair in most circumstances, and a cold war is going on between them to an extent; but the latest events in Middle East which started from The Arab Spring keep the wars warm and it becomes more complicated day by day.