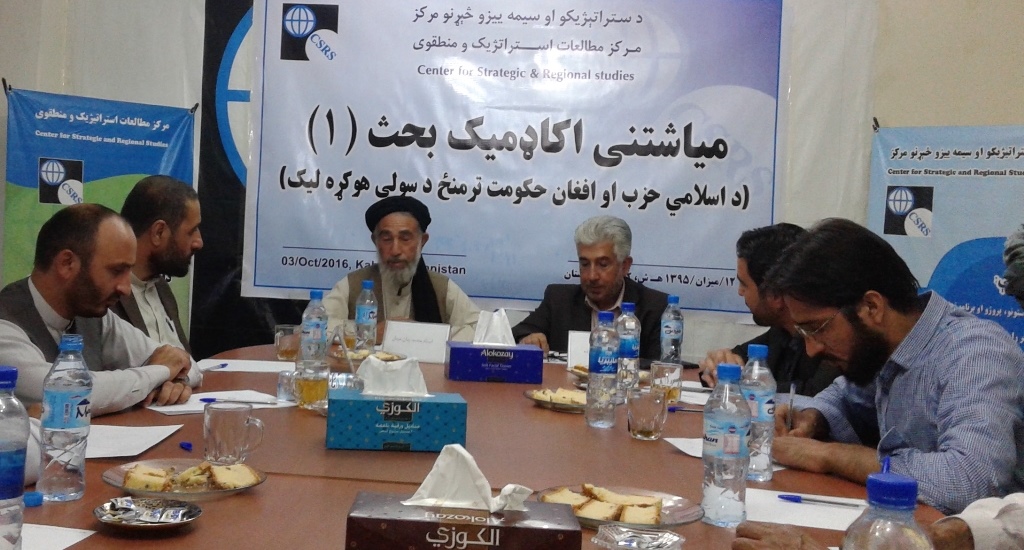 After prolonged negotiations, Hezb-e-Islami (HI) under Gulbuddin Hekmatyar’s leadership signed peace deal with the Afghan government. Both sides labeled this deal as an outcome of intra-afghan talks.

In its monthly academic debate, which discusses each month’s hot issue and would carry on in the future, the Center for Strategic and Regional Studies (CSRS) discussed the Afghan government-HI peace deal on October 3, 2016, where besides the speakers many academic individuals had also participated.

Beginning the seminar with his speech, the General Director of CSRS Dr. Abdul Baqi Amin said that the peace deal between the Afghan government and HI is a positive step and stressed that currently some foreign circles are trying to take advantage of the current war in Afghanistan, and added that ending the war is in absolute interest of all Afghans.

Dr. Abdul Baqi Amin said that, “three decades of war has fiercely agonized Afghans and although this war was started by foreigners; but its main victims are Afghans, therefore, Afghans themselves must take the initiative to end this war”; he also added that he is contented that HI has preferred political struggle over armed struggle and also said that the objective of the seminar is to offer constructive advises to both sides.

The first speaker of the seminar Waheed Muzhda said that turning away from armed struggle is a good message and undoubtedly HI’s joining in the peace process would have impacts inside the country.

About the flaws in the agreement he said that, the ambiguous statement regarding foreign troops’ withdrawal from the country in the fourth article of the agreement would confront both sides with a number of questions in the future.

He also highlighted that Hekmatyar may confront some issues after coming to Kabul; therefore, he has to play the role of a national leader rather than an ethnic leader.

Another speaker of the seminar Mohammad Zaman Mozamel also emphasized on the importance of NUG-HI deal and labeled it as an important achievement to the Afghan government, he add that “although there is nothing important in the deal but Hekmatyar’s return is important”

He also said that after Hekmatyar’ return to Kabul, he would have to deal with a number of issues and pointed out the opposition of Sebghatullah Mujadadi as an example and said that, Hekmatyar must take his steps carefully.

The participants of the seminar also discussed the issue and asked questions and were of the opinion that the peace deal with HI must succeed and, after coming to Kabul, Hekmatyar must avoid ethnic and religious conflicts.