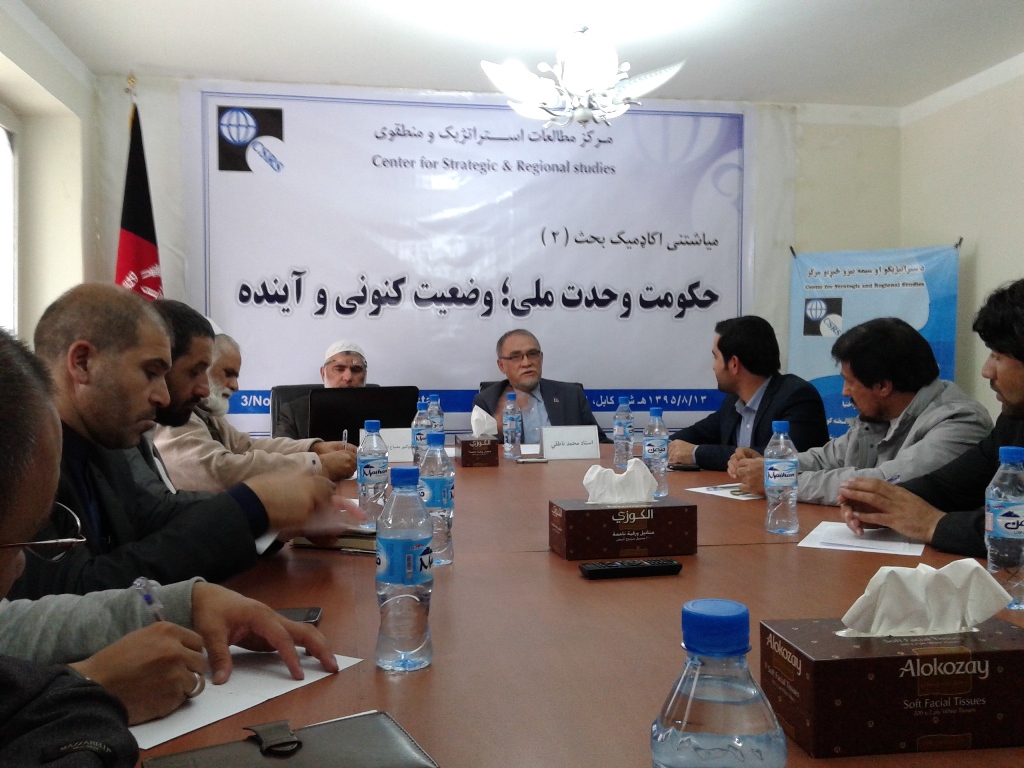 Two years ago, after the long disputes between the two leading candidates of the presidential elections, National Unity Government (NUG) was formed with the mediation of the US Secretary of States John Kerry and in the past two years it experienced many challenges. After two years the NUG has now reached a stage that its continuation has become a challenge.

In the series of its monthly academic debates, the Center for Strategic and Regional Studies (CSRS) discussed this issue on 3 November 2016 where besides the speakers some scholars had also participated.

The first speaker of the seminar and head of the High Commission to Oversee the implementation of the NUG political agreement Mohammad Nateqi said in his speech that the main reason behind the current disputes between the government officials is failure of the NUG’s two leaders in fulfilling their promises and their disagreements in appointing government officials; he also added that there is no political will to implement the NUG agreement.

Mr. Nateqi said that until now, four documents were signed between the two camps of the government, but only less than 40% of the promises made in these documents were implemented. According to Nateqi, there are still 16 points of disagreements between the two leaders and efforts are being made to address these disagreements including efforts to bring electoral reforms, distribution of electric ID cards, preparing draft to amend the constitution, Loya Jirga to amend the constitution, selecting the leader of opposition and etc.

According to Nateqi, although the NUG is not fundamentally founded in accordance with the provisions of the Afghan constitutions, but 150, 130 and 50, articles of the Afghan constitution, to some extent, justified the legality of this government and hence it saved the country from a probable crisis. He said: “after the formation of the NUG, 13 powers of the President, from all the powers that the constitution had preserved to him, were given to the Afghan Chief Executive”.

Another speaker of the seminar, Dr. Misbahullah Abdul Baqi termed the current government as the coalition government of the two electoral teams; because he said that we can call it the NUG when in critical conditions all parties of the nation come together and reach a consensus. He said that the crisis during the election was also artificial and was extended only to prepare Afghans to accept such a government. He said that the foreigners wanted to pursue their objectives, which was impossible if there was a powerful central government in the country, for the same reason efforts were made to form such a government in 2009, but failed.  He said that they wanted to increase the power stakeholders in the country in order to be able to use them against each other.

Dr. Misbahullah added that, although the government was illegitimate since ever the beginning but now this problem is expanding even more, because besides the executive branch, the legislative branch is also faced with the legitimacy crisis.

According to Dr. Misbahullah, the NUG’s achievement did not meet people’s expectations. For instance, during their campaigns the leaders of the NUG kept saying that they would even sacrifice themselves to bring peace, but now we see that war has intensified and doors for peace are closed. He said that, the current government followed the path of the previous government regarding peace process and instead of direct talks with Afghans it turned towards Pakistan.

Dr. Misbah said: “it seems that the current government would thus complete its five years term, and there is not much hope for reforms, except that the two leaders make serious and fundamental efforts to solve problems.”

Other participants of the seminar asked questions and discussed the issue and stated that this government is more like a ‘conspiracy’ and has challenged national interests. The participant said that the law was violated in order to form the NUG but in case of peace talks law is always the red line that cannot be crossed.