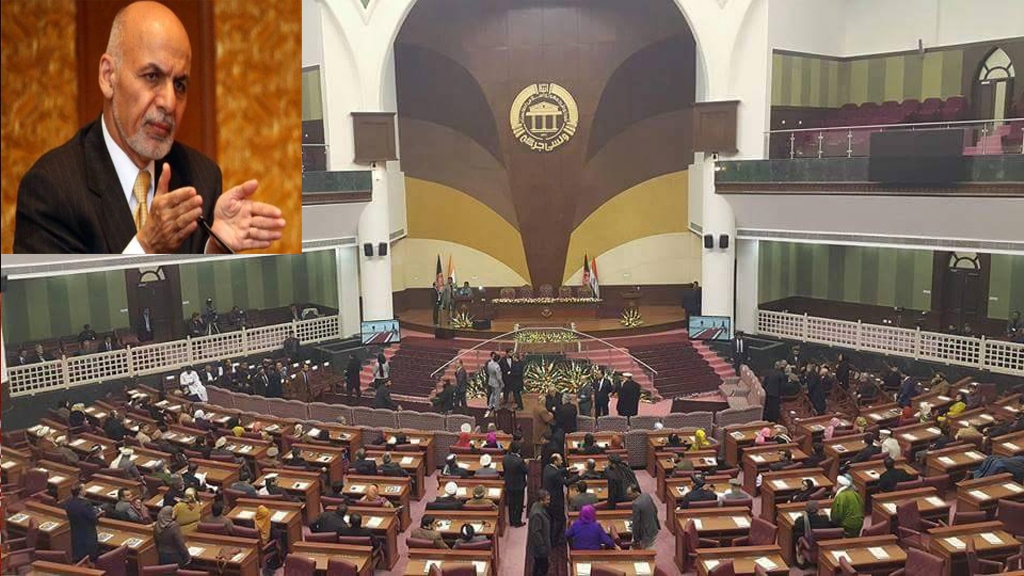 Wolesi Jirga (the Lower House of the Afghan Parliament) summoned 16 ministers last week, 7 of whom were dismissed while 9 others received vote of confidence.

The process of impeachment of these ministers was not only reflected in domestic and international media, but also sparked the harsh response of the National Unity Government (NUG). These ministers are being impeached and dismissed at a time when, besides the fight with the Taliban, the Afghan government confronts many challenges in areas of economy, politics and public confidence.

The stages of the NUG-Parliament mistrust and confrontations in the past two years, the process of impeachment, and the probable future situation are analyzed here.

Confrontations of executive and legislative branches

Since ever the beginning, there were disagreements between the NUG and the Afghan Parliament and tensions between them passed through the following stages:

Second, Wolesi Jirga approved 8 out of 18 ministers that the government had nominated and the remaining 16 ministers received vote of confidence from the Parliament after three months.

Third, some Parliament Members accused the NUG of supporting ISIS.

Forth, tensions raised between Wolesi Jirga and the NUG over the Parliamentary and district councils elections. Announcing the schedule of elections and extending Parliament’s term, the Afghan government, to some extents, put an end to these tensions.

Fifth, Wolesi Jirga consecutively rejected the Afghan President’s decrees on electoral reforms and finally the President sent the issue to the Supreme Court.

The process of impeachment

From 12 to 18 November 2016, Wolesi Jirga impeached 17 ministers of the Afghan cabinet, who had spent only less than 70% of their respective ministries’ development budget. The Afghan Minister of Information and Culture resigned before the process of impeachment; therefore, the Parliament only summoned and impeached 16 ministers.

Although, previously the Afghan President had said that he will dismiss those ministers who were unable to spend their development budgets properly; but in the first day of impeachment, dismissal of three ministers provoked Ghani and he said that the reasons for summoning ministers were “unjustified” [1]. The Afghan President asked the Afghan Parliament to postpone the hearing process and demanded from ministers not to participate in hearings; but contrary to President’s demands, the process of impeachment was completed last week and 7 ministers, including Minister of Foreign Affairs, were sacked.

As in the case of rejection of decrees on electoral reforms, the Afghan government has sent ministers’ impeachment case to the Supreme Court and has demanded from this court to decide in this regard, in the light of the “Afghan constitution, the country’s current situation and particularly taking in consideration the 1394 financial problems and the suspended and revoked promises of the international community”. [2]

In the first impeachment session of Wolesi Jirga, three ministers were dismissed; but in other sessions, the summoned ministers did not attend the session and impeachment was held in their absence. Four of the absent ministers were dismissed while the others received vote of confidence. Therefore, on the one hand, Wolesi Jirga was accused of dual approach[3], and on the other hand, some believes that “impeachment in the absence of ministers is not in accordance to the provisions of the constitution”.

In a meeting with Parliament members and in the extraordinary meeting of the cabinet[4], the Afghan government stressed on the followings as the reasons behind the failure of ministries to spend their national development budget:

Evaluation of the government’s claims

The government is sincere to some extents in its second and third reason; because the current security situation of the country is evident and during 1393, the afghan government dealt with a sort of political crisis; but still, old projects, delay in delivering aids by international community and security situation cannot be presumed as the reason for failure in spending development budget by all the ministries, the ministers are also to blame.

The Afghan ministries were also unable to expend development budget in years after 1381, when large sums of foreign money infused in Afghanistan, and the country was in better security situation than the present time. The Second Vice President Sarwar Danesh has the same criticism, he says that: “problem behind failing to expend budget is not any individual’s fault but the fault of administrations’ structures; therefore, instead of focusing on individuals we should rather focus on budgetary system, projects, method of work and the process of procurement.” [5]

Summoning and impeachment of the ministers in current critical situation in the country is a new challenge. Although, in the short run, the problem is resolved to some extents and according to the President’s decree, the dismissed ministers will continue with their jobs; but tensions and mistrust between the executive and legislative branches would increase. And Wolesi Jirga would assume this situation as limitation of legislative branch’s authorities; because, in both the case of legislative decrees and ministers’ impeachment, the government did not accept the decision of Wolesi Jirga.

If the Supreme Court backed Wolesi Jirga’s decision regarding the dismissal of the ministers, once again, disputes between the two leaders of the NUG would emerge over appointing new ministers.

In addition, there are rumors as well that the Presidential palace is behind the impeachment of ministers, because it wants to evacuate some posts for its opposition council (Protection and Stability Council) and Hezb-e-Islami (Hekmatyar), something the Presidential Palace denied. If the new ministers of the cabinet were appointed from these circles then these rumors would turn out to be true; and in short run it will decrease the level of oppositions by these councils.

[3] Read more by clicking on this link:

And Mandagar’s Wednesday edition, “Why did the ministers faced dual approach”