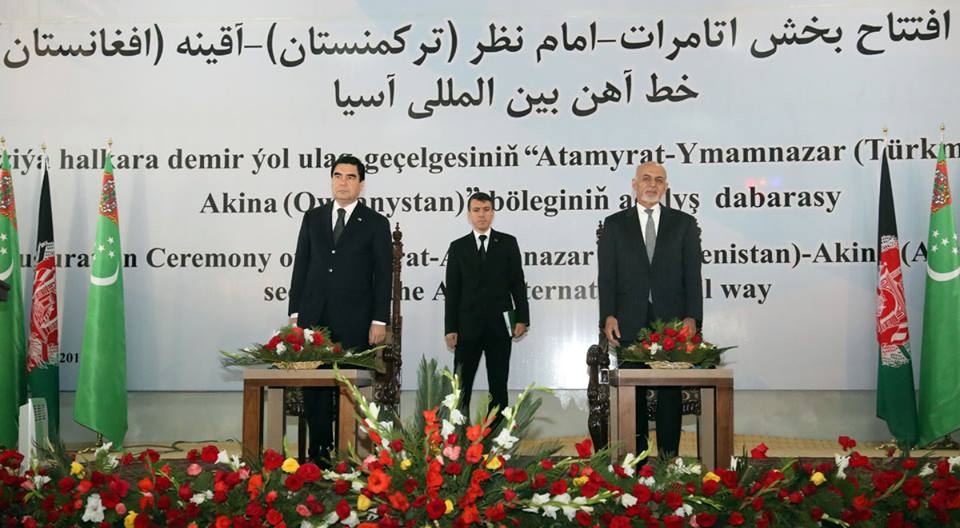 The Afghan president participated and delivered a speech in “Global Conference on Sustainable Transport” in Ashgabat, Turkmenistan. The conference was held under the chairmanship of Ban Ki-moon where leaders of various countries had also participated in it.

After the formation of the National Unity Government (NUG) in Afghanistan, the government has focused on economic relations with regional countries, including Turkmenistan. Last year (13 December 2015), the TAPI pipeline project was inaugurated which would transfer 30bn cubic meters Turkmen gas through Afghanistan to Pakistan and India. Now in the recent Afghan President’s visit to Turkmenistan, besides attending in conferences and meetings, the Atamurad-Akina railway was also inaugurated.

Here you would read about the bilateral relation between Afghanistan and Turkmenistan particularly after the formation of the NUG and also about the significance of Atamura-Akina Railway.

The Background of bilateral relations

After Kazakhstan, Turkmenistan is the second largest country in the region (480 km2vast) with a population of 5.23 million and   is the least populated country among the Central Asian countries. But, there are vast natural reserves (particularly oil and gas reserves) in its deserts.

Compared to other neighbors of Afghanistan, Turkmenistan had little intervened in Afghan internal conflicts. This country had also had warm relations with the Taliban regime and during the Taliban regime; the scheme of constructing TAPI gas pipeline (TAPI) was also discussed with this country.

After the overthrow of the Taliban regime, the Kabul-Ashgabat relations entered a new stage of bilateral relations, with economic aspect. In this phase, besides several official visits to Turkmenistan by Hamid Karzai, some agreements were also signed between the two countries, the most important of which was the TAPI-pipeline project-signed between the leaders of four countries (Afghanistan, Turkmenistan, Pakistan and India) in 2010.

However, despite historical relations between Afghanistan and Turkmenistan, the two countries did not have sign strategic agreements and collaborations and this vacuum was always felt in bilateral relations. Afghanistan has also valued its relations with Pakistan, Iran, China and other countries in the region more than the relations with its Northern neighbors.

The NUG and relations with Ashgabat

After the formation of the NUG, Afghanistan’s relation with Turkmenistan increased more than any time in the past. In the past two years, bilateral exchanges have increased and both have signed important agreements as well.

Heading a high-ranking delegation, President Ghani for the first time visited Turkmenistan in January 2015. In the two-day visit, both countries signed five collaboration agreements in areas of politics, economy, energy and sport. [1] Later on 27 August 2015, the Turkmen President traveled to Afghanistan and signed the documents of bilateral cooperation in Kabul. Ghani’s second visit to Turkmenistan was to inaugurate TAPI-pipeline project[2].

In his recent visit to Turkmenistan, Ghani first participated and delivered his speech in “Global Conference on Sustainable Transport” and then met his Turkmen counterpart and talked about strengthening bilateral relations between the two countries[3]. In another meeting, President Ghani received an honorary doctorate degree from Berdimuhamedov and in the third day of the trip, they inaugurated the railway between the two countries.

Speaking in the inauguration ceremony of the railway in Akina port, Ashraf Ghani said that with the inauguration of this route, oil prices would considerably decrease; he added, “Linking Akina port with the international railway network is a big step in the Afghan-Turkmen relations but it is also a major step toward trans-continental economy of Asia.” The Turkmen President also spoke about increasing the exportation of electricity to Afghanistan and said that the exportation of electricity would increase from the current 100 thousand megawatts to 150 thousand megawatts in the next year and to 300 thousand megawatts in 2018.

Significance of relations with this country is evident from its economic and transit position in the region. After Russia, Iran and Qatar, Turkmenistan has the fourth largest gas reserves in the world and produces 70 to 80 billion cubic meters (70bn-80bn m­­3) of gas annually. This has led the country to have a better position and play a better role in regional cases and international energy issues. Therefore, since most of the imported gas in Afghanistan is from Turkmenistan and this country is also an exporter of electricity to Afghanistan, the NUG has put more focus on relations with this country.

The Atamurad-Akina railway, contract of which was signed in 2013, inaugurated on 28 November 2016 in Imamnazar area of Turkmenistan by the Presidents of Afghanistan and Turkmenistan and thus the practical work on the third railroad at the borders of the country started[4]. This railway which is 635km long, 300 km of which passes through Afghanistan, connects Imamnazar area of Turkmenistan to Faryab province of Afghanistan through Atamurad and Akina ports. The Atamurad-Akina railway is supposed to extend through Andkhoy, Sheberghan, Mazar-e-Sharif, Khulm and Kunduz to Shirkhan port and connect this port to the Tajikistan’s railway network. Thus, this route is part of Turkmenistan-Afghanistan-Tajikistan railway project.

Since Afghanistan is a landlocked country, inauguration of this railway has created hopes that after this, Afghanistan’s reliance on Pakistani ports will end and opportunities to extend economic relations with regional and European countries will be provided. In the past one and half decades, Pakistan has repeatedly stopped Afghan goods in its ports in order to pressurize Afghanistan. Therefore, trade is used as a political tool to pressurize Afghanistan.

Now although Afghanistan has limited its trade with Pakistan and imports part of its goods through Central Asian countries, but in Hayratan port, due to customs duties by Uzbek government, oil prices has risen in the country. Therefore, the construction of this railway is very important for Afghanistan.

On the other hand, the Atamurad-Akina railway is a part of the Lapis Lazuli Corridor, which is a historical transit road and as part of Silk Road, it has special historical significance for Afghanistan. If this project was completed, the way to connect the developing countries with the developed countries (Central Asia and Europe) would be paved and since Afghanistan is also included in this project, it provides a major economic opportunity to Afghanistan.