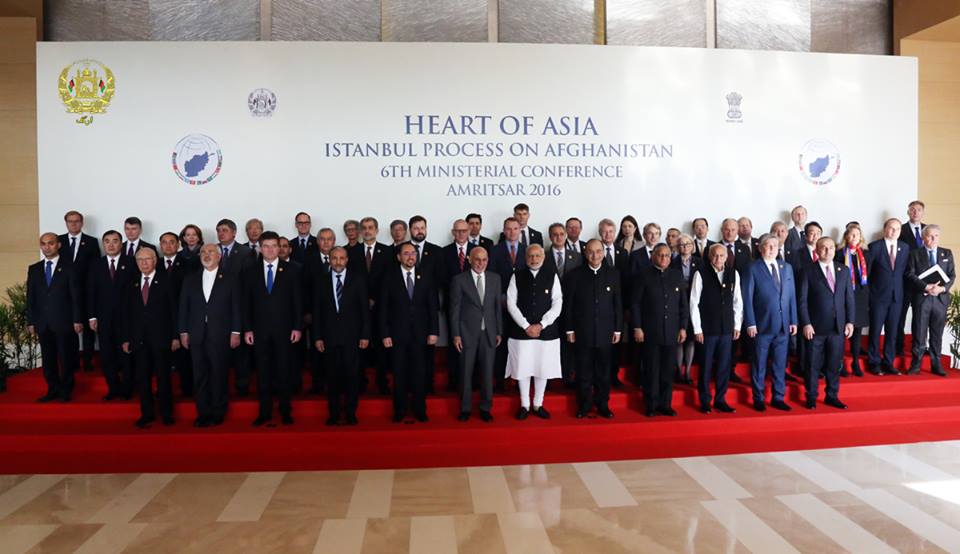 The sixth Heart of Asia Ministerial Conference on Afghanistan was held in Amritsar, India where representatives of 40 countries and organizations had participated.

Speaking at the conference, once again, the Afghan President Ashraf Ghani harshly criticized Pakistan and said that, even though, there are significant bilateral and multilateral agreements between Pakistan and Afghanistan, the two countries are, indeed, engaged in an undeclared war against each other.

The significance and the background of Heart of Asia (HoA) Conference- the Istanbul Process, and impacts of the recent conference on the regional and Afghan situation are issues that are analyzed here.

Afghanistan is located at the heart of Asia and given its location, countries in the region has always been keen about the situation; security and stability in this country, because it has a profound impact on  the region. Therefore, the process of Heart of Asia Conference was first held in 2011 with the initiative of Afghanistan and Turkey. Afghanistan, Pakistan, China, India, Iran, Russia, Kazakhstan, Kirghizstan, Saudi Arabia, Tajikistan, Turkmenistan, Turkey, Azerbaijan and United Arab Emirates are the member countries of Heart of Asia and its conferences are held in one of the member countries every year.

The objective of the HoA Conference is to address the challenges and shared interests of Afghanistan, its neighbors and regional countries. The conference has three main pillars, which include political consultations, confidence building measures and cooperation with regional organizations. [1]­­­The Heart of Asia is composed of 14 participating countries, 17 supporting countries including western countries and 12 supporting regional and international organizations.

The first HoA Conference under “Security and Cooperation in Heart of Asia” was held on 2 November 2011 in Istanbul, Turkey. [2] The second conference of this series was organized in 2012 in Kabul, Afghanistan; the third was held in 2013 in Almaty, Kazakhstan; the forth was convened in 2014 in Beijing, China; the fifth was held in 2015 in Islamabad, Pakistan and the sixth HoA Conference was held last week (4 December 2016) in Amritsar, India.

In these conferences, the member countries have always emphasized on comprehensive cooperation among regional countries, creates a significant regional process of political negotiation and close regional partnership in order to maintain peace and stability in Afghanistan and all heart of Asia countries. In addition, connecting Afghanistan with the heart of Asia region, escalating political talks, consultation between the countries in the heart of Asia region and comprehensive cooperation to fight terrorism and extremism through correlation and collective work.

The sixth Heart of Asia Conference

Despite the fight against terrorism and seeking ways for enduring peace in Afghanistan, diversifying economic and trade ties between Afghanistan and India and other regional countries were also discussed in this conference[3].

Speaking at the conference, the Afghan President stressed on the necessity to end Afghanistan’s reliance on foreign aids and mentioned that the extraction of underground reserves is one of the ways through which our country can become self-sufficient.

Ghani said that Afghanistan pays an expensive price with losing lives on daily basis due to terrorism. He also added that around 30 extremist groups, specified by the United Nations, are trying to create their bases inside the country to insecure Afghanistan and other regional countries.

Once again, Ghani criticized Pakistan and states it is engaged in an undeclared war with Afghanistan and in response to $500m Pakistani aid, he said that instead of contributing to Afghanistan’s reconstruction, this money must be allocated  to combat extremism in Pakistan[4].

Without mentioning any specific country, Indian Prime Minister Narendra Modi demanded from all regional countries to put an end to the violence and extremism in their respected countries and stressed on comprehensive cooperation with Afghanistan.

At the sidelines of this conference, the Afghan President also met Pakistani Prime Minister’s advisor Sartaj Aziz, Indian Prime Minister Narendra Modi and Iranian Minister of Foreign Affairs Jawad Zarif. In these meetings, once again, the Afghan President presented Afghanistan’s demands for peace and economic cooperation. In his meeting with Sartaj Aziz, Ghani demanded from Pakistan to remain committed to its promises. In the meeting with Jawad Zarif, the expansion of Kabul-Tehran bilateral relations and economic cooperation between the two countries were also discussed.

At the end of the Conference, a declaration was released in which all the participant countries stressed on political talks and close regional cooperation in order to bolster stability, peace and prosperity in Afghanistan and all Heart of Asian region, and peaceful settlement of all conflicts and differences. The statement also emphasized on promotion of inclusive collaboration between the Heart of Asia countries in order to combat terrorism and the peace accord between Hezb-e-Islami and the Afghan government was also welcomed.

Impacts on Afghanistan and the region

Kabul-Islamabad relations: after the formation of the National Unity Government (NUG) in Afghanistan, the Pak-Afghan relations passed through many ups and downs and reached to utmost distrust till the sixth HoA Conference. Meeting with Sartaj Aziz at the sidelines of the HoA Conference, Ghani demanded from Pakistan to fulfil the commitments it had made to Afghanistan, and collaborate with Afghanistan in maintenance of peace and combating terrorism. Sartaj Aziz also pledged that his country would help Afghanistan in its peace process and its struggle against terrorism[5].

Ghani’s criticism from Pakistan and rejection of Pakistan’s $500m aid sparked harsh reactions from Pakistani officials and media. Regarding Ghani’s speech at Heart of Asia Conference, Sartaj Aziz said that those speeches were to please India and added that India would never succeed to separate Afghanistan and Pakistan. The Pakistani Minister of Defense Khawaja Asif also criticized Ghani and said that Ghani wants to blame Pakistan for his own failures.

Kabul-Delhi relations: after the formation of the NUG, due to Kabul’s rapprochement to Pakistan, it distance itself from Delhi, but later when Afghanistan became disappointed with Pakistan’s insincere cooperation in the Afghan peace process, it improved its relations with India.

In the last one and a half year, Afghanistan had warm relations with India and with the Ghani’s meeting with Narendra Modi at the sidelines of the HoA Conference, the two sides emphasized on further improving bilateral relations between the two countries. In this conference, the two countries had the same positions regarding Pakistan. Both Modi and Ghani, in their speeches, demanded from regional countries to end violence and extremism in their respected countries. Although Ghani mentioned Pakistan but Modi, without mentioning this country, criticized it.

This conference is also considered significant in terms of economic cooperation between Afghanistan and India. Both countries reached an agreement to establish an air corridor to transit cargos. This corridor can provide access, for both countries, to each other’s production and can also facilitate bilateral trade between the two countries.

Overall, as expected, once again, India isolated Pakistan in an important international event, and what occurred at Heart of Asia Conference shows that Afghanistan and Pakistan might have joined hands to stand against Pakistan’s policies in Afghanistan and the region.