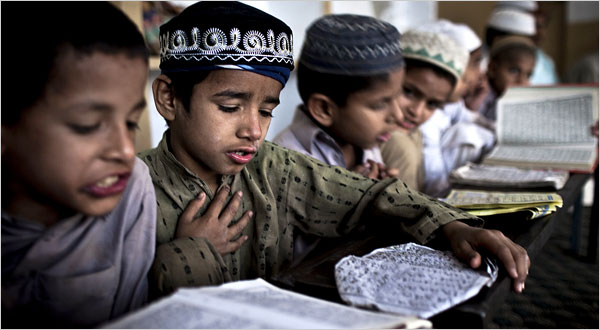 Speaking at the Afghan Parliament, a member of Jamiat-e-Islami Abdul Hafiz Mansoor labeled mosques and Islamic Culture subjects [1] (an Islamic subject at universities) as “terrorist” producers. For the past two weeks, Abdul Hafiz Mansoor’s controversial remarks have sparked debates and discussions regarding Islamic Culture subjects and mosques in media in general and in social media and the Parliament in particular. Minister of Hajj and Religious Affairs had also been summoned in Wolesi Jirga for further explanations.

The West has criticized Islamic Culture, Madrasas, Mosques and Islamic political system long time ago and has considered the political aspect of Islam to be the origin of “terrorism”; but inside Afghanistan, it is the first time that a member of an Islamic movement terms Islamic Culture and mosques as centers of terrorism.

Although there may be some concerns regarding the contents or syllabus of Islamic Culture subjects and as well as management of some of the mosques; but it does not mean that these two are the propagators of terrorism. One should not ignore the other basic factors behind terrorism.

Several questions are noteworthy; do we agree with the west with the definition of terrorism? What is the United States and Afghanistan’s anti-terrorism strategy? Do mosques and Islamic Culture subjects really generate terrorists? What are the  root cause of terrorism in Islamic Word and particularly Afghanistan? In addition, which parts of Islamic Culture subjects needs reforms? In this part of the analysis, we have answered these questions.

“Terrorism”; an ambiguous and disputed term

Before discussing the link between terrorism and Islamic Culture subjects and mosques, it will be better to first define terrorism. The term “terrorism” is ambiguous and disputed  term often used by westerns. Not many people share the same definition of terrorism; but according to Alex P. Schmid’s research, various organizations and states have put more than 250 definition of terrorism until now[2].

Although most of the people do not have the same definition of terrorism; but almost all of them agrees with some of “terrorist incidents” or “terrorist activities” as an acts of terrorism. For instance, killing civilians and innocent people, abducting to spread fear in the society or to provoke the state, or to force the government or international community to do something unfit to their working framework etc. However, despite many efforts by a number of people and the United Nations, the term “terrorism” is yet to be properly defined in International legal Law[3].

At international levels, it seems difficult to present a definition of terrorism that is acceptable to all. Therefore, the term is often used politically and emotionally. The history of the past two centuries also gives testimony of the same fact, many occupier and colonial powers have labeled their enemies who fought for the freedom and independence of their countries as terrorists. For instance, at first, Nelson Mandela was known as a terrorist, the Afghan Mujahedeen and the freedom fighters were also labeled with the same term during their Jihad against the Soviet Union; the Algerian freedom fighters that fought against France were also called terrorists. That is why the quotation “one man’s terrorist is another’s freedom fighter” was recognized  worldwide and sparked discussions in terrorism related sciences.

The US and the Afghan government’s counter-terrorism strategy

The United States started its so called “war on terror”  in Afghanistan despite the fact that no Afghan was involved in 9/11 incident and nor the United States provided convincing facts to the Taliban for handing over Osama Bin Laden to them; but still the US started the current war in Afghanistan and termed it as anti-terrorism war. From 2001 to 2011, the war on terror  was carried-out under the leadership, consultation and strategies of the US; from 2011 to 2014, the Afghan forces took part in this war as well, and then after 2014, security responsibilities were completely transited to the Afghan security forces. Despite all of these, the anti-terrorism war is still an American war.

The Americans themselves as well as the current US President have criticized the US war on terror in Afghanistan and Iraq; and in various parts of Islamic world, voices are raised against this war.  Even the former Afghan President Hamid Karzai has also harshly criticized the US  war on terror and has termed some aspects of the US anti-terrorism strategy as “Taliban making factory”.

On the other hand, although the Afghan Parliament member Abdul Hafiz Mansoor fiercely criticized Afghanistan’s anti-terrorism strategy and said that, “The anti-terrorism strategy has been a failure in the recent several years, and both the Afghan government and Parliament is to be blame.” But, he criticizes the government for not taking serious measures to tackle terrorism, “Terrorism is an extremist thought rather than explosives. The security forces can prevent explosions but they cannot control the ideas that are spread from one mind to another and through media,” added Mansoor. Such expression would not be beneficial in anti-terrorism fight and it will rather bolster extremism and the so-called terrorism.

In his speech in the Afghan Parliament, Abdul Mansoor called mosques and Islamic Culture as the two main sources of terrorism. “Most of our mosques spread extremist thoughts; Islamic Culture is currently producing terrorists,” he said.

In academic and scientific discussions, it is almost impossible to accuse the overall subject of Islamic Culture for producing terrorism. But, if one says that the contents of Islamic Culture should be reconsidered or discussed or even if someone accuses some teachers of Islamic Culture for presenting their own opinions instead of curriculum then it would not have been a major issue. But, despite any academic arguments and with the absence of research and surveys, accusing Islamic subjects for training terrorists has rather political and emotional aspects.

This accusation is also wrong from a historical perspective. Although the phenomenon of extremism is emerged in Afghanistan since the 20th century; but before then, despite the existence of mosques and Islamic subjects (Islamic subjects are used to be taught under various titles in the Afghan mosques and madrasas) Afghanistan was free of extremist influences. Moreover, it was these mosques and the subjects taught there that give birth to the brilliant Afghan civilizations of the history, such as the Herat, Balkh and Ghazni civilizations during Ghanznavids, Ghurids and Timurids periods.

The main root cause of the terrorism

Radicalism and terrorism in Islamic world can be traced back to the first decade of twentieth century and is particularly rooted in the British and American policies in the Middle East, for instance, their efforts against Ottoman Caliphate, the Sykes-Picot Agreement, paving the way for Israel in Palestine etc.

During the cold war, western countries supported dictators, puppets and leaders that were not backed by the people in Islamic countries. Thus, people in these countries become tired of the ensued situation. Later, when some Muslims returned to their countries after Jihad against the Soviets in Afghanistan, they were prosecuted and imprisoned. These deeds increased peoples’ inclination towards terrorism.

The post-2001 American war in Afghanistan and Iraq and their activities in these countries resulted in resurgence of the Taliban in Afghanistan and emergence of ISIS in Iraq. That is why we say that terrorism or radicalism in Islamic world is naturally a backfire of the western particularly the US strategy in Islamic countries. Moreover, there might be also some internal factors behind the terrorism and extremism; but the main drivers of terrorism are, largely, external factors.

The fundamental factors behind extremism and terrorism in Afghanistan is not mosques and Islamic subjects, but the US military presence in Afghanistan, its deeds and behaviors at Bagram and Guantanamo prisons, night raids, and insulting religious sanctities. That is why even at some occasions Afghan army soldiers have also opened fire on Americans and other foreign troops. In addition, ignorance, lack of Islamic knowledge, poverty and unemployment are other factors behind terrorism, but these are considered  minor factors.

One can briefly say that the US anti-terror strategy in Afghanistan and Iraq is similar to Mohsen Hamid’s English novel Reluctant Fundamentalist, where a novel character Chengiz becomes an extremist/terrorist due to others’ behaviors and deeds. The same is accurate in the case of Muslims across the world and Afghanistan, where people are reluctantly forced towards fundamentalism, extremism and terrorism due to others’ policies and deeds.

Rejecting Islamic subjects and its reform: the two different concepts!

There are three important parts of Islamic Culture subjects:

First, he who teaches it.

Second, the subject in general.

Demanding reforms or changing the first and the third case is neither controversial nor a bad thing to do and most of the people may agree with it. We also feel the necessity for reviewing the syllabus of these subjects. But, omitting this subject (Islamic Culture) completely from the curriculum of the universities is controversial and debatable; because:

Firstly, almost all the contents are about the universality and comprehensiveness of Islam and worships in Islam, although there Ejtihadi (اجتهادی) issues in some parts, which can be interpreted in other ways too; but it do not mean that overall curriculum or the subject itself provides the way for extremism or terrorism.

Secondly, in this period of globalization, when, alongside the political and economic invasion, cultural invasion is also occurring, the Islamic subjects would ideologically and psychologically safeguard our youth and in this era of modernization it would also help in answering those questions that are raised by orientalists and some so called intellectuals.

[1] In this text the term “Islamic Culture” (the first letters in capital) is referred to the Islamic subject taught in Afghan Universities.

[3] Human Rights Voice, there is no UN definition of terrorism, see it online: http://www.humanrightsvoices.org/eyeontheun/un_101/facts/?p=61