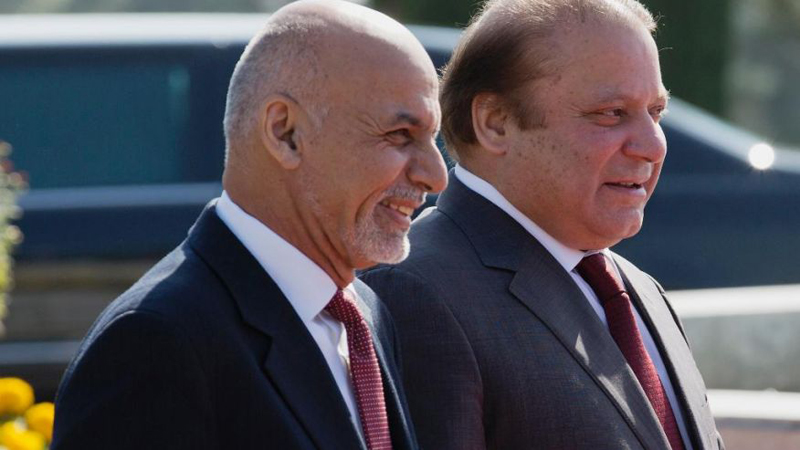 Based on some newly published reports in Pakistan that the Pakistani government has warned Afghan Taliban unless they halt their spring operations in Afghanistan, they will “face unpleasant consequences.” Apart from this, Pakistani Prime Minister Nawaz Sharif in his recent visit to Kabul had some unprecedented anti-Taliban statements. He said: “The enemies of Kabul cannot be friends of Islamabad.”

Since few months, especially after the formation of National Unity Government under President Ashraf Ghani’s leadership, the relations between Kabul and Islamabad have been constructed and the visits of the high level officials have also increased. It seems that Kabul has left its traditional hostile policy towards Islamabad and expects the same from its neighbor.

The core reason behind the unprecedented visits of Pakistani leaders to Kabul might be to some extent changed approaches of the countries regarding each other. The NUG in Afghanistan has been pursuing a pivot to Pakistan in its foreign policy. If Pakistan’s approach has not changed that much, at least some of their statements make the Afghan officials optimistic.

The pivot to Pakistan in Kabul’s foreign policy had impacts on Afghan government itself too. From one side the Afghan government is under severe criticism and from the other side the new approach has provoked the Afghan Taliban too. Though the new policy of Afghanistan can affect Taliban to some extent, Taliban consider themselves as free. Therefore, the increase in Taliban’s spring attacks shows the anger of the group. Such an increase proves to some extent Taliban’s freedom.

The discourse arise regarding Pakistan when Pervez Musharraf stepped down and PPP reached to power that has Pakistan really changed its policy towards Kabul? Later on in 2013, the discourse once again posed when Nawaz Sharif won election. But neither in Zardari’s tenure nor in that of Sharif the approach of Islamabad has not been changed.

After the formation of national unity government in Afghanistan and the deadly attack on an army school in Peshawar of Pakistan, a mentality emerged that Pakistan’s approached has changed. The Afghan government was also optimistic and gave privileges to Pakistan.

In Afghanistan’s pivot to Pakistan only Pakistan benefitted. Pakistan not only gained privileges, but also it was able to put Afghanistan away from India, the traditional friend of Afghan governments.

Last week wall Street Journal reported of Taliban envoy direct peace talks with high peace council members in Urumqi of China. It further claimed that the talks convened with the help of ISI and China. The report was widely quoted in Afghan and international media. But Taliban rejected the talks and termed it as “Propaganda” and considered peace council as “fake”.

It has been said that the Secretory of High Peace Council, Masoom Stanikzai participated in Talks with Taliban members Mullah Abdul Jalil, Mullah Mohammad Hassan Rahmani and Mullah Abdul Raziq. But keeping Taliban official statement in consideration, no official member of the group has participated. Sources confirms to CSRS that aforesaid persons are not members of Taliban Qatar political office. It also looks likely that these persons might have mediated between Taliban and Peace Council carrying messages to both the sides. Stanikzai was nominated Defense Minister a day after the China talks.

Had Taliban real members participated in China talks, Pakistani media would have published the news as a success story. It has published many false report earlier. For instance, recently Pakistani media published reports revealing that Qari Din Mohammad Hanif, member of Taliban Qatar office had visited Islamabad and peace talks would be officially initiated in Kabul. Later on, evidences proved the report false. Now, if Taliban members have left Islamabad for China talks, then Pakistani media outlets would have published the report. These evidences express clearly that participants of China talks on behalf of Taliban were not members of the group’s political office in Qatar.

Pakistan promised Afghan government of cooperating in peace talks, while Taliban launched their unprecedented summer operation with such intensity. Taliban expressed their dissatisfaction regarding Gahni’s policy towards Pakistan. It was the first time the group criticized Afghan government’s policy regarding Pakistan.

Taliban’s intensified summer operations may express the level of Pakistan leverage on the group. Now it has been said that Pakistan warned the group to halt their ongoing operations. But one thing is very clear that Pakistan has exploited its fake leverage on Taliban and it has benefitted from the card in negotiation table. On other hand, President Gahni’s policies have also unintentionally approved the fake role Pakistan has drawn for itself.

The Afghan government faced the same problem in the past. The NUG has not been able to at least win the hearts and minds of Kabul residents by good governance let alone the remote citizens. Since the formation of new government, people in Kabul miss the former government under Hamid Karzai’s leadership. The failed policies of NUG can be the core reason behind such mentality.

The recent joint visit of Nawaz Sharif and Raheel Sharif may have decreased the concerns of Afghan officials by their statements, but the relations of Kabul-Islamabad will revolve around:

Pakistan has had positive statements regarding peace and security in Afghanistan, but nothing has changed on the ground, rather the security has been deteriorating. According to a survey of UNAMA in first four months of 2015 difference assaults have claimed the lives of 974 and 1963 civilians have been wounded.  According to NYT report in first four months of 2015, 1800 troops of Afghan national army were killed and 3400 wounded.

The reason why Afghan officials are still optimistic regarding Pakistan’s role and still waiting is one, and that is whenever the Afghan concerns increase Pakistani media initiate a media game and publish some reports increasing the optimism of Afghan officials. But the scenario will not sustain longer and relations of Kabul will be related to peace and security in Afghanistan. Both the sides committed two mistakes during the new relations:

First: Afghan government thought that Pakistan will be able to bring Taliban into negotiations table; and

Second: Pakistan expressed as Taliban are completely its puppets and whatever it wants can be done.

Therefore, Pakistan is being taken responsible of any action against security in Afghanistan. The Afghan government is also under public pressure and as a result the relations between the two countries will deteriorate once again.