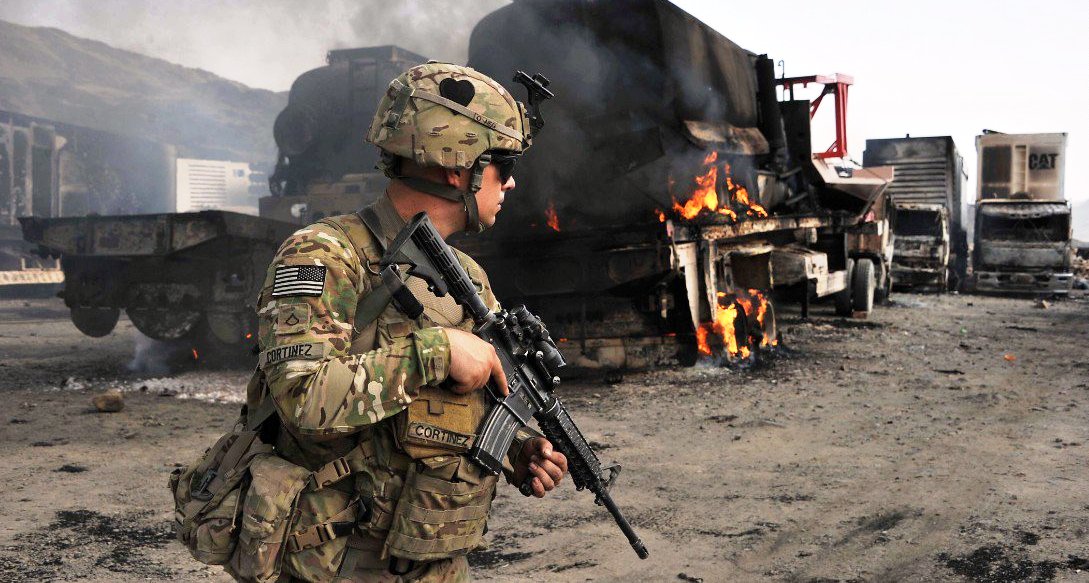 The current war in Afghanistan was started 16 years ago by the US and NATO, and apparently, the 9/11 attacks were the main reason behind the US attack in Afghanistan. This war was waged to overthrow the Taliban regime and eliminate the al-Qaeda bases from Afghanistan. Although primarily the US and NATO forces defeated the Taliban, this defeat was temporary; later they reemerged and began their activities, and now they are stronger than the past. Now the insecurities have spread from the South to the North of the country, and the Afghan government has lost the control of a large proportion of its territory.

In addition to the casualties of the engaged parties, this war, which has continued for 16 and is getting intensified every day, has killed and injured tens of thousands of civilians.

The US attack on Afghanistan

During the Afghan Jihad against the Soviet Union, thousands of Arab fighters were fighting alongside the Afghan Mujahidin. Later the Mujahidin government under Ustad Burhanuddin Rabbani give these fighters sanctuary and, to some of them, the Afghan nationality. When the Taliban hold control of more than 90% of the Afghan soil, many Arabs were in Afghanistan, including the leader of al-Qaeda Osama bin Laden. From 1996, the Taliban began to support al-Qaeda.

Through its embassy in Pakistan, the Taliban government announced that the US had provided no evidence proving Osama bin Laden’s involvement in 9/11 attacks. According to the then-Taliban Ambassador in Pakistan Abdul Salam Zayef, the Taliban government tried a lot to find the truth behind the attack, but the US was not ready to back up from the attacking Afghanistan. He says that the 9/11 attack was not an accident, but the US had orchestrated it to gain a military presence in Afghanistan in order to ensure its long-term interests in the region. For three times the Taliban suggested to the US government to try Laden in court, but the US did not accept the offer. [3]

On October 7, the US airstrikes began and on October 31 the fighters of the United Front, backed by the US airstrikes, entered Kabul and overthrew the Taliban regime. On November 25, the Bonn Conference on Afghanistan was convened and, within ten days, an interim government under Hamid Karzai was formed.

The 16-years war in Afghanistan

16 years ago, seeking revenge from al-Qaeda, the US attacked Afghanistan and the war that started in the aftermath of that attack continues. During this period, the US strategy has passed through various stages. After the beginning of the war in Afghanistan, the US strategy in Afghanistan was to overthrow the Taliban regime and establish a new government. At this time, George W. Bush was the US President, and the relations between Kabul and Washington were warm, and the aids of the international community imbued in Afghanistan. In the second phase, when the Taliban resumed their fight against the foreign forces and the Afghan government, the US’s attention shifted to war and in 2006, increase the number its troops in Afghanistan.

During the Presidency of Barrack Obama, on the one hand, relations between Kabul and Washington deteriorated and, on the other hand, the casualties of the US soldiers in Afghanistan increased and within the US, voices rose against the US war in Iraq and Afghanistan. Therefore, the US policy towards Afghanistan became irresolute. First, the decision was made to increase the number of troops in Afghanistan, and then they decided to withdraw and finally at the end of 2011, the foreign soldiers began to pull out from Afghanistan.

Besides retreating from Afghanistan, the US had planned to have military bases in this country, and when after the formation of the National Unity Government (NUG), the Kabul-Washington relations improved, the Bilateral Security Agreement (BSA) was signed with the US. As a result of warm relations, the US President Barrack Obama decided to stop the process of withdrawing from Afghanistan, demanded by the Afghan government. The NUG permitted foreign troops to carry out the night raids, banned by the former Afghan president Hamid Karzai. More importantly, the NUG remained silent against the Afghan civilian and military casualties by foreign troops. Thus, the role of the Americans in the battlefield increased, and besides an increased number of the Afghan civilian and military casualties, the casualties of the foreign troops also increased.

Overall, in the past 16 years, not only the US failed to defeat the Taliban but also failed to prevent the emergence of ISIS, a force that started its activities in the Eastern provinces of the country and within a short time is altered to a serious threat to the Afghan government. The group has carried out several attacks in the capital and other major cities of the country. Moreover, according to the Afghan officials, currently, 20 armed groups are fighting in Afghanistan.

Foreign troops’ return to the battleground

Although apparently the war mission of NATO and the US ended in 2014 and now the foreign forces have the responsibility of training, supporting and giving consult to the Afghan forces, after Donald Trump’s coming to power, once again, the US has announced to deploy additional troops and continue the war in Afghanistan.

After months of discussions about the new US strategy towards Afghanistan, Donald Trump announced the new US strategy on 22 August 2017 which included supporting the Afghan government, eliminating “terrorist groups” and eliminating the sanctuaries of these groups in Pakistan. In his speech, Trump mentioned to win the Afghan war several times and defined this triumph as: “attacking enemies, eliminating ISIS, hitting al-Qaeda, preventing the Taliban control over Afghanistan and putting an end to the attacks against the US.” Trump also said that the US’s withdrawal from Afghanistan would strengthen “terrorist” groups such as ISIS and al-Qaeda.

Overall, the new US strategy was focused on the following important points:

Apparently, the US attack on Afghanistan was to suppress the Taliban and al-Qaeda; however, the US was pursuing its long-term interest in the region. If the only motive behind the US retaliation were the fact that the Taliban did not hand over Osama, the Americans would have pulled out from Afghanistan when they killed Osama in Islamabad. Some of the analysts believe that the primary objective of the US in the region is to encircle its rivals such as China and Russia and that the Americans have not yet reached their goals nor have they gained access to the resources of the Central Asia.

After the announcement of the new US strategy, it seems that the US wants the continuation of the war in Afghanistan because how 3500 additional soldiers can win a war that 100 thousand soldiers could not.

[2]  By foreign prisoners they meant the ten Americans that were in the Taliban prisons.