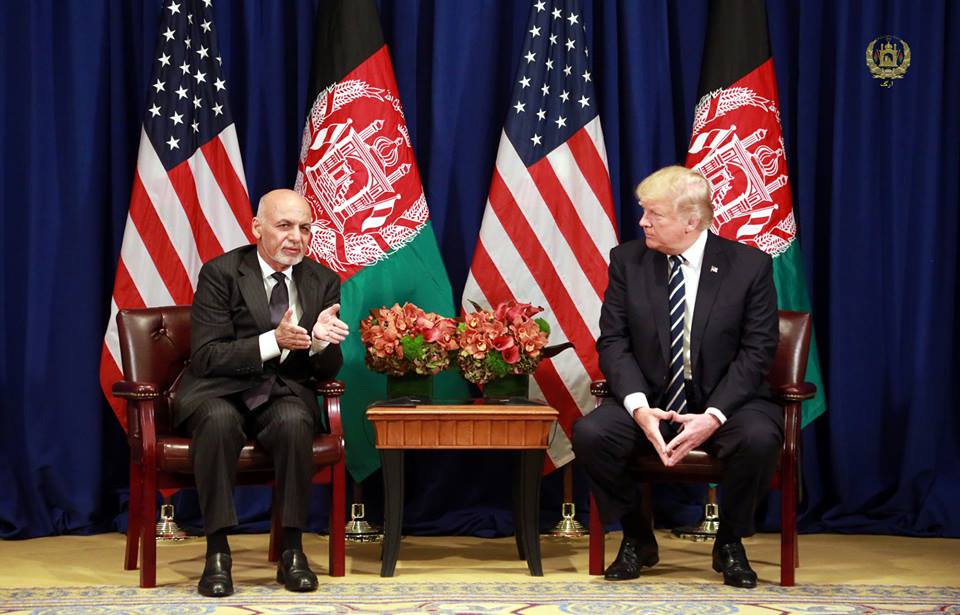 After the inauguration of Asian Games, the Afghan President Ashraf Ghani traveled to the US as head of a high-ranking Afghan delegation. In this trip, President Ghani delivered his speech in the UN General Assembly and met the high-ranking representatives of many countries including the US President.

After the formation of the new administration in the US, it is the first trip of the Afghan President to the US as well as his first meeting with the US President Donald Trump.

The important points of the Afghan President’s speech in the 72nd General Assembly of the UN and the Kabul-Washington ties in the aftermath of Donald Trump’s election as the US president and especially after the announcement of the new US strategy towards Afghanistan are issues that are analyzed here.

After the formation of the National Unity Government (NUG), relations between the US and Afghanistan were much warmer than that of during Hamid Karzai’s government. These relations lasted for two years, and after mid-2016, Presidential elections began in the US. During the electoral campaigns both of the leading candidates did not have many comments on Afghanistan; yet compared to Trump, Hillary Clinton had enough experience and information about Afghanistan.

Unlike the expectations, Trump won the 2016 US elections. He had contradictory comments on Afghanistan, and for the most part, he did not agree with the US policy in Afghanistan in the past 16 years. This affected Trump’s Afghan policy and the issue of dealing with Afghanistan remained unclear for nine months. Even during this time, he made inconsistent remarks about Afghanistan.

After a long delay, the US president announced the new US policy towards South Asia and Afghanistan last month. The main points of this policy were conditional cooperation with the Afghan government, the unclear future of the US forces in Afghanistan, pressures on Pakistan, and increasing India’s role in Afghanistan.

This policy was to a greater point a parallel of Afghanistan and India’s policy in the region that is why both Kabul and New Delhi welcomed the strategy while Pakistan opposed it. The Pakistani Ministry of Foreign Affairs rejected the policy, and in this regard, the Pakistani Chief of Army Staff said: “We do not need the US’s aids, but we want US’s trust.”

President Ghani’s trip to the US

The meeting between the Afghan President and Donald Trump on 21 September 2017 was rather a discussion regarding the Afghan underground resources. In this meeting, the two leaders came to an agreement that the US companies should work to extract the natural resources of Afghanistan. They said that it was an effective step towards maintaining the security, strengthening the Afghan economy, and creating employment opportunities for the people of both countries. On the other hand, they said that by extracting its natural resource, Afghanistan would become more self-sufficient and that the burden from the shoulders of the US would decrease.

Besides other factors, informing Trump about the natural resources of Afghanistan was what played a role in changing Trump’s stance about the withdrawal of his troops from Afghanistan.

On the other hand, it was the first time that President Ghani delivered a speech in the UN Assembly and there were positive and negative points in his remarks as well. For instance, he termed non-governmental elements and violence as the fifth wave of political violence that as he put it would continually threaten international security for decades. On the other hand, reliance on Pakistan once again was an approach that would not have desirable outcomes this time as well.

Moreover, the Afghan President’s hope that Trump’s policy would bring 80% of the country under the control of the Afghan government is an extreme assumption that will perpetuate the war in the country.

The confrontations of India and Pakistan in Afghanistan

After the withdrawal of the Soviet troops from Afghanistan, the rivalry between Pakistan and India in Afghanistan augmented. After 2001, due to its financial and military aids, India earned a good reputation in Afghanistan. Pakistan saw this as a threat to themselves that is why the former Pakistani Prime Minister General Parwaiz Musharraf said in an interview, “We support the Taliban to prevent Indian influence in Afghanistan.”

Targeting Indian Consulates, citizens, and projects by the Pakistan-based armed groups such as Lashkar-e-Tayiba and Jaish-e-Mohammad is a testimony of the growing confrontation between the two countries in Afghanistan.

The recently announced strategy of Trump also affected this confrontation. “We oppose India’s economic and trade ties with Afghanistan, and we will never want India’s political and military role in Afghanistan,” said the Pakistani Prime Minister Khaqan Abasi during his visit to the US.

Khaqani’s remarks are, on the one hand, an effort on behalf of Muslim League party to make the Pakistani military happy and, on the other hand, it indicates the “strategic depth” of Pakistan’s colonial policy, which is a direct intervention in the affairs of Afghanistan. Khaqani’s recent remarks also show that Pakistan still pursues its old policy in Afghanistan and sees Afghanistan through its old glasses.