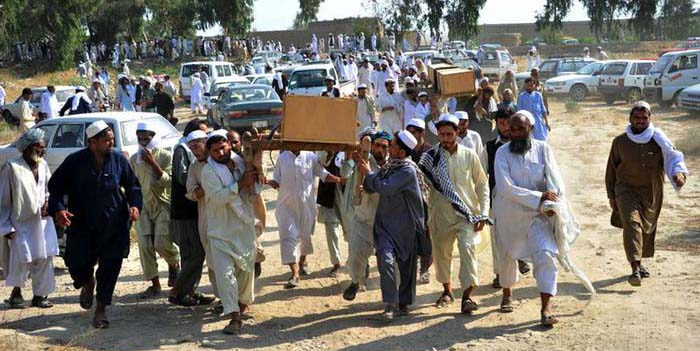 The National Unity Government (NUG) of Afghanistan had signed the controversial Bilateral Security Agreement (BSA) with the United States on the very first day it took over. Ashraf Ghani’s predecessor, Hamid Karzai denied doing so. The Afghan negotiating team advised the government not to sign the agreement on that manner. They said the US government is not ready to accept what we want. Despite cultural Loya Jirga’s advice, Hamid Karzai denied to sign the BSA.

One of the controversial issues was granting judicial immunity to the American soldiers In Afghanistan. The US government seriously stressed on it. But president Karzai, who truly understood American security forces, was convinced that they will continue to kill civilians and use this immunity as a shelter. So it was one of the most controversial issues between the US government and Hamid Karzai. He once said we will even call American soldiers as “occupiers” if they targeted civilians.

Last week, US drone attacked a funeral ceremony in south eastern Khost province, in which 34 Afghan civilians were killed. It is said that civilians participated in a funeral ceremony of a tribal elder, when they were targeted by US drone. In the attack, six members of a single family were killed. But, Still the National Unity Government has not criticized the blind American bombardment. In this regard, the former afghan president, Hamid Karzai, has strongly condemned the massacre in a statement.

The Silence of the Afghan Government

The book “Academic and Legal Assessment of BSA’’, which was published by CSRS, contained scores debates of researchers and political analysts on BSA. Some analysts expressed their concerns on giving judicial immunity to American soldiers. This immunity, they expressed, would legalize killings of civilians and none would have the right to complain. On the other hand, in the initial days of NUG, American commander, in an interview with New York Times, has said that Ashraf Ghani is more cooperative than Hamid Karzai. Ashraf Ghani and Karzai, he added, are different as night and day.

The Silence of NUG after this massacre seems to prove what American general has said earlier. In the American revolutionary war against British colonialism, British soldiers killed seven Americans in Boston. Still the US calls it Boston massacre. But, here, by massacre of 34 Afghans no one in Afghan government raises their concerns and no one calls Americans to take steps cautiously.

The drone strikes in Afghanistan

The Bilateral Security Agreement between Afghanistan and US government is silent regarding the drone attacks, which American generals’ seriously stressed on. It is not mentioned in BSA that how, where and for what purpose US army can use drone technology, which is widely used by US troops against their enemies, in recent years. The Cross border usage of the mentioned technology from Afghan soil against the US government enemies –like in Waziristan- is also not mentioned.

CIA manages drone technology in Afghanistan and nowadays they manage it not from Pakistani Shamsi air base, but inside of Afghanistan. Generally, some crucial issues –like CIA operations and usage of drone technology- is deliberately not mentioned in the BSA.

Additionally, some leaked documents from Afghan embassy in USA disclose that the American negotiating team wanted more freedom in this regard, than that of mentioned in the BSA draft. The leaked documents also disclose that American negotiating team was requesting immunity regarding CIA operations and usage of drone technology.

American massacre of Afghan civilian population and on the other hand, Taliban’s unique diplomatic activities may make a trouble for Afghan National Unity government. Taliban through recent diplomatic activities, to a large extent, changed public opinion regarding them.

US government in the last thirteen years has promised Afghans with good governance, but the governance is worsening daily. The Massacre of Afghan civilians and not fulfilling their promises have doubled the hatred of Afghans towards Americans.