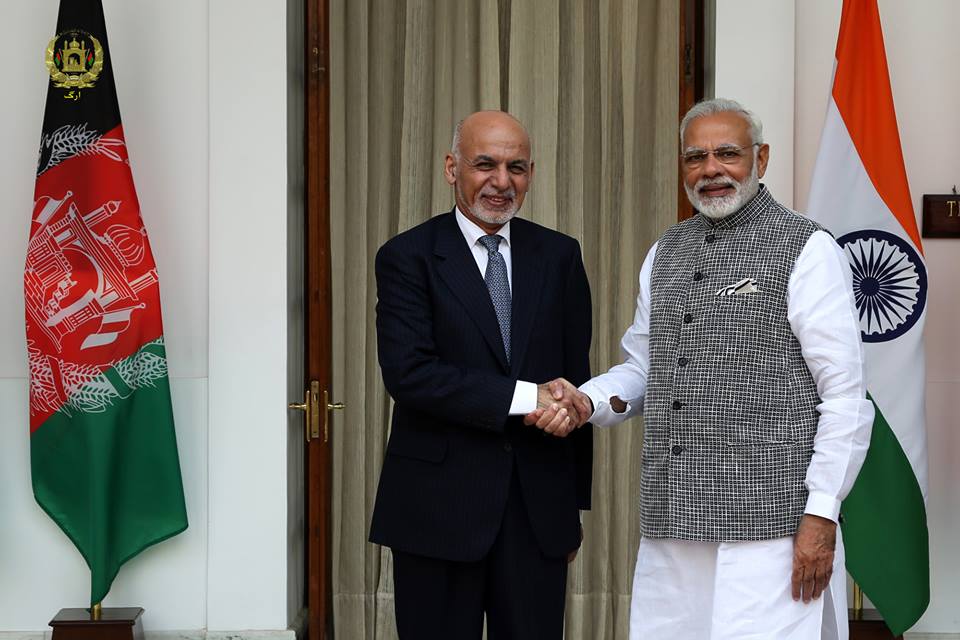 This trip coincided with the US Secretary of States Rex Tillerson’s trip to Kabul, Islamabad, and New Delhi. One day after the Afghan President’s trip, the US Secretary of State went to India and besides discussing the Afghan issue, addressed fierce criticisms against Pakistan saying that the US aids with Pakistan will be related to Pakistan’s steps against extremists on its soil.

Several Provinces of Afghanistan witnessed several bloody attacks in the past one month which left 150 people killed and more than 300 injured. After such attacks, the Afghan government always points the finger towards Pakistan.

After this trip of the Afghan President, the Pakistani Minister of Foreign Affairs also blamed Afghanistan and India of making efforts to destabilize Pakistan.

Here we have analyzed the Kabul-New Delhi ties after the announcement of the new US strategy towards South Asia and Afghanistan.

India has always had good relations with Afghanistan. India and Afghanistan had close ties during the two terms of Hamid Karzai’s Presidency. In 2011, the two countries also signed the strategic agreement. However, after the formation of the National Unity Government (NUG), due to President Ghani’s approach to Pakistan, these relations deteriorated.

Although several months after the formation of the NUG, Indian-Afghan relations, once again, began to improve, after the announcement of the US strategy for South Asia and Afghanistan, these relations further improved.

India wants to play a role in Afghanistan by increasing its soft power in this country that is why it has completed many infrastructural projects in Afghanistan and has, overall, provided $3bn in aid for Afghanistan in various projects.

Now that Pakistan is under international pressures, India is also trying to marginalize Pakistan. Besides, political isolation, Kabul, and New Delhi are trying to marginalize Pakistan in areas of economy and trade too.  In his meeting with the Afghan President, Narendra Modi said that he was happy that now the Kandahar, Herat, and Balkh provinces of Afghanistan was connected with India through an air corridor and reiterated that India was also trying to expand its trade with Afghanistan through the Chabahar port.

Currently, it seems that Afghanistan and India want to work as regional partners and pressurize Pakistan by improving relations between the two countries.

The increasing Indian role in Afghanistan

The US policy towards South Asia and Afghanistan is, to some extent, similar to Obama’s policy but in some other aspects, it is very different. Although the new strategy had said that there were sanctuaries for the extremists in Pakistan, it had not pressurized Pakistan to the current scale.

In the new policy, Trump had asked India to increase its role in Afghanistan. That is why a statement by the Afghan Presidential Palace regarding the Afghan President’s trip to India states that “Both leaders discussed the emerged opportunity after the announcement of the new US strategy and termed it significant for the stability of the region.”

In order to increase Indian role in Afghanistan, both Afghan and American officials repeatedly traveled to New Delhi, and within one month, the Afghan Chief Executive, Minister of Foreign Affairs, and President visited India.

Although India sees the current situation as an opportunity, it is still careful about Pakistan’s sensitivity in Afghanistan. During his trip to the US, the Pakistani Prime Minister Khaqan Abbasi strongly opposed India’s military presence in Afghanistan. Although during the Afghan Chief Executive’s travel to Delhi, the two sides signed agreements in areas of training the Afghan forces and their treatment, currently India does not want to increase its military role in Afghanistan. That is why during a joint conference with the US Secretary of Defense, the Indian Minister of Defense said that “India will never deploy troops in Afghanistan.”

At the peak of the pressures on Pakistan, the Pakistani Chief of Army traveled to Afghanistan to reduce these pressures, and after that, on the one hand, discussions were raised about the resumption of the quadrilateral talks and President Ghani’s traveling to Pakistan.

President Ghani’s trip to Pakistan happens at a time that there were also reports about a probable trip of Ghani to Pakistan. In his meeting with President Ghani, Narendra Modi said: “The countries in the region must sincerely fight against terrorism and eliminate the sanctuaries of the terrorists.”

Due to some reasons, Kabul has failed to maintain balance in its relations with India and Pakistan. These relations were not balanced particularly after the formation of the NUG. Kabul distances itself from Indian when it approaches Pakistan and when its relations with Pakistan deteriorates it approaches India. Therefore, the card of New Delhi in Kabul-Islamabad ties and relations between Kabul and Islamabad have always made Pakistan concerned. Due to its strategic depth, Islamabad will never tolerate close Kabul-New Delhi ties.

However, for Kabul, the Kabul-Islamabad relations is related to the implementation of the promises made by Pakistan. Nevertheless, currently, Kabul needs to properly manage its close relations with India considering the sensitivity of Pakistan so that these close ties do not lead to the instability in Afghanistan.