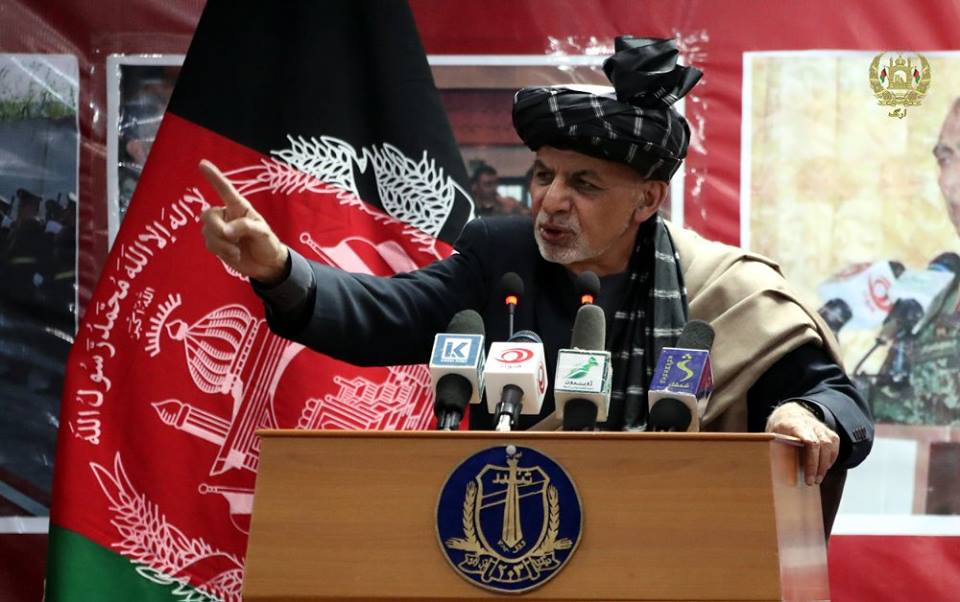 During his speech in Paktia province, the Afghan President for the first time officially accused Russia of supporting the Taliban and said that “The Taliban are receiving assistance from those who have spilled the blood of one and half million Afghans.” Although President Ghani did not mention any country, but it was obvious that he was indicating Russia.

President Ghani made these remarks during the death ceremony of the victims of the Taliban’s recent attack on the police headquarter of Paktia province which left 60 killed and about 236 injured.

Although before this the Afghan and American officials including Rex Tillerson had accused Russia of providing military aid to the Taliban, it is the first time that a senior Afghan official is accusing Russia of backing the Taliban.

Releasing a statement, the Russian Ministry of Foreign Affairs has stated that Moscow regarded Afghanistan as a partner country and that such rhetoric from the President of this country was not “acceptable” for them. [1]

Here we have analyzed the Kabul-Moscow relations, these ties after the formation of the National Unity Government (NUG) in Afghanistan, and the recent tensions in these relations.

Until 1991, Russians helped their ally and partner governments in Afghanistan. However, when they were defeated in Afghanistan, they changed their strategy towards this country and in November this year, the representative of four out of seven Mujahidin groups met the Russian President Boris Yeltsin in Moscow and agreed to release the Russian captives if Moscow pulled back its advisors from Kabul and stopped assisting the government of Dr. Najeebullah.

Despite the Russian cooperation with Mujahidin officials after the collapse of Dr. Najeebullah’s regime, civil war burst in Afghanistan, and in August 1992, the Russian Embassy in Kabul was closed. However, Russians kept their diplomatic relations with the Mujahidin through their consulate in Mazar-e-Sharif until its closure in 1997. After that, Russia was one of the main supporters of the “Northern coalition”, one of the strongest oppositions of the Taliban. [2]

After the 9/11 attacks, Moscow not only supported the anti-Taliban policies of Washington but also agreed to provide various cooperation for the US including a transit way for American soldiers, intelligence sharing, and other political cooperation.

The NUG and relations with Russia

After the formation of the NUG, Kabul made efforts to form a regional consensus in the fight against extremism and “terrorism”. In order to achieve this end, the Afghan President Ashraf Ghani and the Afghan National Security Advisor Hanif Atmar traveled to Russia for several times and the Russians also promised to help.

The Afghan government was convinced that insecurities in the Northern Afghanistan and the beginning of the activities of “ISIL” in Afghanistan would urge Russia to increase its military aids for Afghanistan; however, quite, on the contrary, Moscow became suspicious of the Afghan government’s fight against “ISIL, ” and due to the close relations of the Russians with the Taliban, the Kabul-Moscow relations began to deteriorate.

Although, in the past three years, officials from both countries have for several times visited each other’s capitals, the mistrust in relations between these two countries is yet to be resolved. The trilateral meeting between Russia, China, and Pakistan, held on 27 December 2016, without inviting the Afghan government and the recent remarks of the Afghan president are the testimony of suspicions in the Kabul-Moscow relations.

The NUG was formed in Afghanistan at a time that ISIL’s influence had reached its heights in Iraq and Syria, announcing the “Caliphate”. At the end of 2014, the Russia President Vladimir Putin expressed concern about ISIL’s expansion in Afghanistan, and later the same issue (the emergence of ISIL in Afghanistan) escalated tensions in relations between the two countries. In the past two years, the Russian officials have repeatedly expressed concern about the presence of this group in Afghanistan. The concerns and mistrust of Russia increased when some local officials in the Afghan government and some members of the Afghan Parliament stated that unknown airplanes landed in the areas controlled by ISIL.

Russian officials, particularly the special representative of Russia in Afghanistan, repeatedly criticized the US policies regarding the fight against “terrorism” and overall the policies of the US in the region. Russians also described the new US strategy towards South Asia and Afghanistan as “unfortunate” and said that this strategy was “useless”. [3]

On the other hand, NATO and the US accused Russia of supporting the Taliban, and the Afghan and American officials are concerned about the Taliban-Russia ties. “The Times” have recently reported that Russia sold oil to companies affiliated with the Taliban and that selling this oil, the Taliban gained $2.5m every month and purchased weaponry and ammunition. [4]

The US Secretary of State Rex Tillerson said in August this year that Russia was arming the Taliban which was a clear violation of international norms. Nevertheless, the Russian Minister of Foreign Affairs said that no proof was presented suggesting Russian aid to the Taliban. He accepted that Russia was in contact with the Taliban but only for the security of its citizens in Afghanistan and to urge the Taliban to sit around the negotiation table with the Afghan government.

The Russian Special Representative in Afghanistan Zamir Kabulov said in July this year that if the US and Afghanistan failed in the fight against ISIL in Afghanistan, Russia would not be indifferent in this regard and would consider military options, something that entails the image of Afghanistan as the battleground for the rivalry between Russia and the US. In response to the comments of this Russian official, the Afghan government stated that having any kind of contact with “terrorist” groups by any country can deteriorate the situation in the region.

The Afghan-Russian relations is deteriorating for the past three years. The issue of ISIL’s presence in Afghanistan has shadowed these relations, and, in the meanwhile, Russia and the US are engaged in a cold war in Afghanistan.

Relations between Russia and the Taliban is a fact outspoken not only by the Afghan and US officials but also by the Taliban and Russia. Nevertheless, the Afghan and American officials intentionally exaggerate about the Russian-Taliban ties and use it as propaganda. The Russian officials have had contradictory remarks about the issue, but overall they deny any kind of military aid to the Taliban and justify their contact with the Taliban by reasons such as the peaceful settlement of the Afghan issue, prevention of the expansion of ISIL in Central Asia and the safety of its diplomats in Afghanistan.

Currently, particularly after the remarks of the Afghan President, it seems that distrust in Kabul-Moscow ties will increase because Russia will not withdraw from engaging in a cold war with the US in Afghanistan, something that would further complicate the situation in Afghanistan.