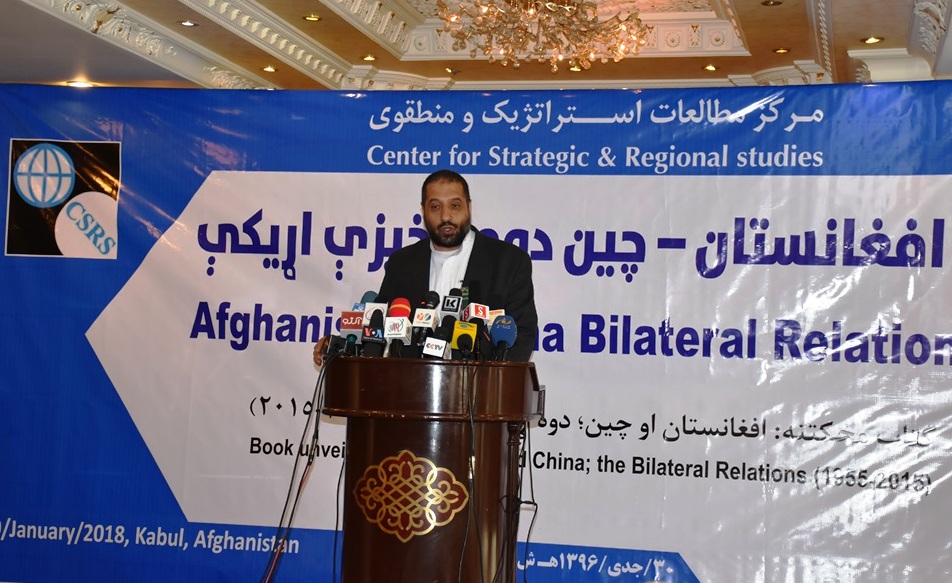 The bilateral relations between Afghanistan and China and China’s role in the regional geopolitical changes were discussed in a seminar, held by the Center for Strategic and Regional Studies (CSRS) in Kabul.

In this conference, held on Saturday 20 January 2018, some Afghan and Chinese experts and researchers, political figures, the former and current government officials, the representatives of the media and hundreds of other people had participated.

Besides the remarks of the Afghan and Chinese academics, a book about the Sino-Afghan relations, authored by the CSRS’s analyst Ahmad Bilal Khalil and published by CSRS, was also introduced.

Opening the event by his speech, the General Director of CSRS Dr. Abdul Baqi Amin pointed out the importance of the bilateral relations between Kabul and Beijing and said: “Both countries need each other; however, Afghanistan has more needs than China.”

Mr. Amin said that a country’s geopolitical importance becomes apparent when the powerful countries of the world seek to achieve their goals and interests through the political geography of that particular country and that since Afghanistan had a geopolitical importance and location, the super powers of the world had always paid attention to Afghanistan throughout the history.

“Unfortunately, the history gives testimony that this geopolitical location has not produced any gain for Afghanistan because Afghans have failed to use the politics of the super powers in their own interests. Therefore, this geopolitical importance and location will be beneficial for Afghanistan only when the interests of the great countries of the world are in line with the national interests of Afghanistan,” added Mr. Amin.

“Among the neighbors of Afghanistan, China is currently an economic and military power and Afghans see this country as a partner country because this country has never been involved in a negative practice towards Afghanistan throughout the history,” he said.

In his remarks in the conference, the Deputy Ambassador of China to Afghanistan Mr. Zhang Zhixin called Afghanistan and China as two neighbors and partners and said: “Today is the 63 anniversary of Afghan-Chinese relations and, therefore, this is a very particular moment and convening this conference in such a day has a particular importance.”

Mr. Zhang Zhixin said that the two countries had had close and historical relations throughout the history starting from the times of Silk Road. He added that in the past two thousand years, the region had witnessed a lot of changes, the only thing unchanged was the strong friendship between Afghans and Chinese.

Mr. Zhang added that in the 19th congress of the Chinese Communist party in Beijing, new changes had been brought regarding the friendship between Afghanistan and China and this friendship entered a new phase.

“In the past several years, the exchange of opinions between Afghans and Chinese and numerous trips of the Afghan senior officials to China was unprecedented. Moreover, the trilateral meeting between the foreign ministers of Afghanistan, Pakistan, and China was successfully held in Beijing, which discussed the trilateral relations. China has always supported a peace process led and owned by Afghans and want Afghanistan’s relations with its neighbors to be strengthened. Therefore, based on this mechanism, we continue our cooperation with Afghanistan,” he said.

He expressed hope that the bilateral ties between the two countries would strengthen in the future and that in this regard the “One belt- one road” project was very important.

He also mentioned China’s contributions to Afghanistan and said that besides the areas of economy and science, China wanted to help Afghanistan in areas of military and building military capacity as well so that the region could become secure and stable.

The former Afghan Minister of Culture and Information and the former President’s Chief of Staff Abdul Karim Khuram discussed the Sino-Afghan relations considering the geopolitical situation in the region.

Mr. Khoram said: “In the Western world, the fear of China’s changing into a super power of the world that could alter the politics of the world had existed for very long. Today China is changed to that political and economic power. This country is Afghanistan’s neighbor and until now it has, in no way, inflicted detriment to Afghanistan.”

Pointing out the geopolitical changes in the world, he said: “After the Cold War, the axes of international relations and the center of the political relations have shifted from Europe to Asia, where China and India are the main players.”

“China and India are the most populated countries of the world and their economies are growing very fast. That is why their need for energy has also increased. A great part of China’s development element (energy) is provided by the Middle East, while the Middle East and the ways through which energy comes to China have altered to the center of crisis and Afghanistan is located between China and the Middle East. On the other hand, obstacles are being created on the ways of China’s energy supplies through ocean. Therefore, China is working to find alternative ways such as China-Pakistan Economic Corridor (CPEC). Currently, China is the Second Economic power of the world and it will probably become the first very soon, something that can attract the US’s attention.” Khuram said.

Mr. Abdul Karim Khuram said that during the Cold War, Pakistan cooperated with all countries including the US but now Pakistan’s cooperation with the US, which wants war and security instability in Afghanistan, is against the interests of China. The US’s tensions with Pakistan is not due to the insecurities in Afghanistan but rather due to Pakistan’s partnership with China because the main reason behind the US’s presence in Afghanistan is to restrict China, according to Khuram.

Mr. Khuram said that Afghanistan’s stability was in the interest of China and that this country had made some efforts to achieve this end in the past and now as well, as China has recently started to establish a military base in Badakhshan; however, these efforts, the same as quadrilateral meetings, would not led to the desiring outcomes because the US was clearly saying that its main rivals were China and Russia. Khuram added that the Americans had written in their defensive strategy that their main focus would be on struggle against the great powers and, therefore, Afghanistan’s instability because of China was in the interest of the US.

According to Mr. Khuram, the only solution was to redefine Afghanistan’s relations with the US and the US should be hold accountable regarding the fight against terrorism at international level and that a government had to come in Afghanistan that should decide based on the interest of the country instead of blindingly following the US.

The former Afghan Ambassador to China Sultan Ahmad Baheen also delivered his speech about China’s role in the geopolitical changes in the region and the Afghan-Sino bilateral relations. With the economic and military power that it possess, he said, China wants to determine the world order where all nations would be engaged equally.

Mr. Baheen said: “There exist two economic zone in Asia; the South Asia and the Middle East. Afghanistan is located in the cross point of North and East, which we know as the heart of Asia. Therefore, Afghanistan’s importance is not due to its resources but rather due to its geopolitical location. As we were a cross road for the world conquerors in the past, now we could be a cross road and the path for economic cooperation between the powers of the North and South. If Afghanistan could manage these rivalries and specify the legal interest of the countries, it would be able to use its geopolitical location to its own benefit.”

“Whenever Afghanistan has been impartial, it has been in peace and whenever it has chosen a side, problems have increased in this country. Today, once again, Afghanistan must be able to create a situation where the super powers could cooperate with each other because Afghanistan is the only country that is not included in the regional tensions. Thus, Afghanistan can be transformed into a center of cooperation.” Said Mr. Baheen.

According to Mr. Baheen China is the only power in the region that has never had any problem with Afghanistan. “The Afghan-Sino relations are of great importance. The former Afghan President had attached great importance to China and the current Afghan President started his foreign visits from this country. Therefore, we have the best strategic relations and we see China as a partner, neighbor, and cooperator country and a country that could maintain the regional and international balance in Afghanistan.” He said

CSRS’s researcher and the author of the book “the bilateral relations between Afghanistan and China” Ahmad Bilal Khalil introduced the book through a presentation and talked about research methodology, the importance, and contents of the book.

According to Mr. Khalil, International developments and changes, China’s economic projects in the region, China’s increasing role in Afghanistan, and the need to filling the academic gap in this area were the factors for which he had decided to write this book.

He said that the importance of this book was rather because it had historically evaluated the Afghan-Chinese relations in the past six decades and that this book included a detailed description about the interests and foreign policies of both countries in dealing with each other in the past one and half decade.

He added that in writing the book, he had rather focused on historical and qualitative research methodology and mostly had used the archive documents and some historical books regarding the issue. He also said that he had used the discussions during meetings with Chinese experts, interviews, and analysis of the events.

“In the first chapter of this book, the historical relations between the two countries are discussed, in the second chapter, the bilateral relations between 1955 and 2001 are explored, the third chapter talks about the ties between Kabul and Beijing between 2001 and 2015. In the fourth chapter, China’s interests, concerns, and foreign policy in Afghanistan are analyzed. In the fifth chapter, the Afghan foreign policy towards China and Afghanistan’s interest in China is elaborated. And finally in the last chapter, a summary of research, conclusion, and recommendations are included.” Explained Mr. Khalil.