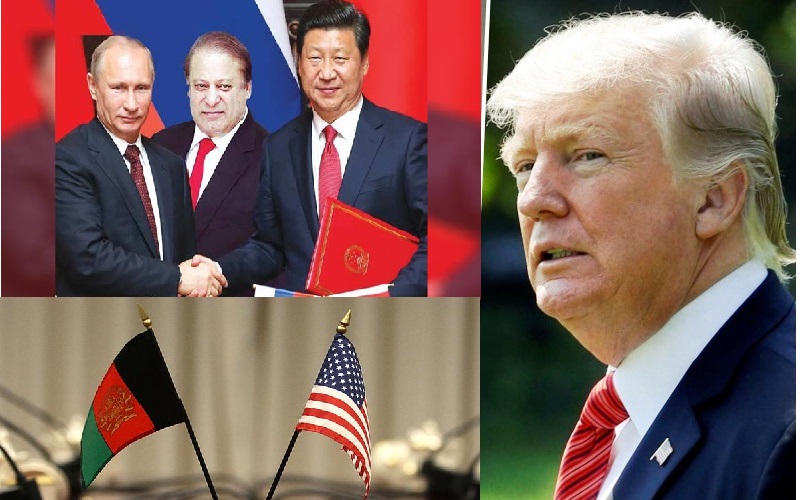 Since the past several years, the geopolitical situation of the region is changing and once again the countries in the region are being divided into two blocs, the same as during the Cold War. Hence, among the great powers of the world, war and rivalry is continuing in our region.

Afghanistan is directly impacted by this situation because on the one hand, the US, which is a key player of the New Cold War, is present in Afghanistan and on the other hand, due to its geopolitical location, Afghanistan is altered to a ground for the rivalries of the world super powers.

To which direction are the regional geopolitics headed? What is Afghanistan’s stance in the middle of all these changes? What should Afghanistan do under the current circumstances? These are the questions that are answered here.

The geopolitical situation in the region

China and Russia are the two countries that supported the US presence in Afghanistan in 2001; however, now Russia is doubtful of the US presence in this country and compared to 2001-2009 years, its relations with the US is deteriorated. Both countries are engaged at an unannounced war with each other in Syria, Ukraine, and now in Afghanistan. In the meanwhile, the US opposes China’s stance regarding the South China Sea and has established close relations with China’s rivals in the region; Japan, Vietnam, Taiwan, etc.

China, which is currently an economic and military power, is afraid of instability and insecurity in Afghanistan. This fear is due to the possible expansion of insecurities to its Xinjiang province and its economic projects in the region. That is why, China wants to be involved in the Afghan issue.

On the other hand, in 2014, the former US president Barack Obama announced the strategy of rebalancing Asia, which the Chinese believe to be a policy to encircle China because according to Chinese, rebalancing Asia means strengthening India, Japan and some other countries against China. In light of this strategy, the trade and defense ties between the US and India is increasing on a daily basis.

Close ties between India and the US in recent years, particularly the military-logistic exchange agreement between the two countries last year and several trips of the US officials to India were at a time that the China-India and India-Pakistan relations in the region were deteriorating.

All these occur at a time that in its defense strategy, the US clarified last week that after this their focus will not be on the war against terrorism but rather on straggle against the great powers of the world.

The tenuous relations between Pakistan and the US is not due to the security instability and providing sanctuary to the armed oppositions of the Afghan government but rather due to the current geopolitical situation where Pakistan is China’s strategic partner and is increasingly getting close to Russia.

If one studies the geopolitics of the region, one will find out that currently, the region is divided into two blocs; the US-India-Afghanistan on the one side and Russia-China-Pakistan on the other. However, China has good relations with Afghanistan and tries to prevent the deterioration of its relations with US because China’s strategy is rather economic-centered. That is why, supporting the US, China held some steps against North Korea in the past several months.

When in 2009, relations between the former Afghan President Hamid Karzai and the US deteriorated, Afghanistan got closer to China and Russia. Nevertheless, after the formation of the National Unity Government (NUG), the US and Afghanistan efforts began to improve once again and within the first 24 hours of the NUG’s formation, the Bilateral Security Agreement was signed Between Kabul and Washington.

The Russia-Afghanistan ties deteriorated when Moscow expressed concern about the emergence of ISIL in Afghanistan and claimed that the present foreign forces in Afghanistan had helped ISIL’s rise in this country. That is why under the pretext of restricting ISIL threat in Afghanistan, Russia made remarks about its relations with the Taliban. After a bloody explosion in Paktika, speaking at a gathering the Afghan President Ashraf Ghani made remarks about Russia’s ties with the Taliban and with this tensions between the two countries increased.

On the other hand, after the formation of the NUG, Kabul approached to Islamabad and undertook such measures that distanced it from India for several months; however, these warm relations with Pakistan did not last for long and at the end of the year, the two countries went on from making accusations against each other to rhetoric and military confrontations. Currently, the Kabul-Islamabad ties are more tenuous than ever in the past and the US pressures towards Pakistan is assumed to be a positive development for Afghanistan. On the other hand, Afghanistan’s relations with India is increasing on a daily basis.

In the meanwhile, Kabul failed to maintain balance in its relations with Iran and Saudi Arabia. The NUG supported the Saudi led coalition in Yemen against the Iran backed Houthi armed groups.

Therefore, considering the past several years, Afghanistan has not maintained its traditional impartiality in the region and the world nor has it been able to manage the current regional rivalry to its own benefit.

What should Afghanistan do?

Although the Afghan government sees the new US policy towards Afghanistan and South Asia and the extension of the foreign troops’ presence in Afghanistan as a success, emphasizing on the war and neglecting peace are issues in the new strategy that circles out of the government criticize and is interpreted as the continuation of the Afghan war.

Although currently Afghanistan depends on the US aids and believes that without the financial and military aids of the US it cannot survive, it pays a heavy price for these aids and is slowly moving towards changing into the battleground of the super powers.

The Afghan foreign policy is not balanced, particularly its policies towards the US, China, and Russia and at a time that some analysis suggest that the US wants the continuation of war in the region, which raises Russia and China’s concern, the current problems may further expand and deepen.