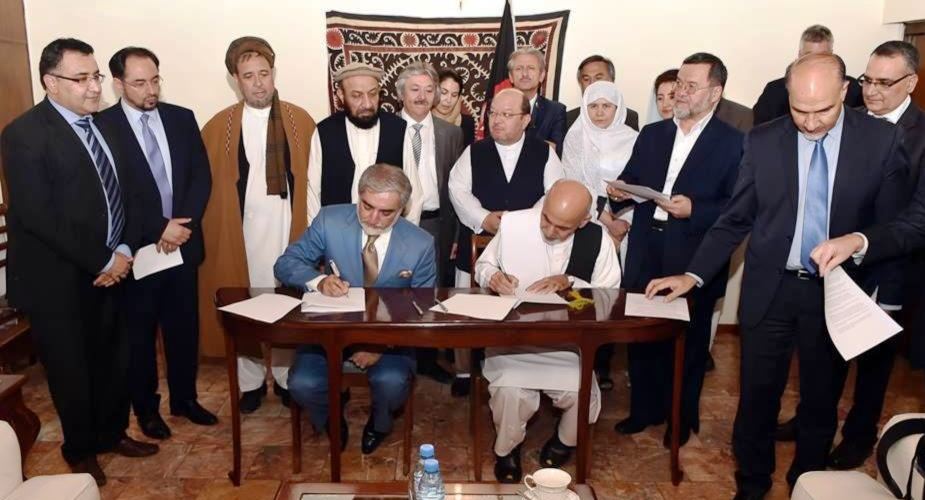 Quoting some sources, the media published some reports saying that the US and the leaders of the National Unity Government (NUG) are trying to extend the term of the current government for another five years, without holding the presidential elections, through establishing a council of leaders.

Rumors in this regard increased when President Ghani met some politicians and Jihadi leaders separately. However, rejecting these reports, the acting spokesperson of the Presidential Palace Shah Hussain Murtazawi said that the meetings of the President with politicians and Jihadi leaders were for consulting them about some national and international issues.

The leader of Hezb-i-Islami Gulbuddin Hekmatyar, who has met the president recently, has termed the scheme to establishing a leaders’ council instead of holding the elections as a failure in a meeting with the leadership of a private TV. It seems that this issue was raised in the meeting between the President and Hekmatyar. In the meanwhile, the spokesperson of the Council for Protection and Stability of Afghanistan (CPSA) has also commented in this regard. One of the leadership members of this council Abdul Rab Rasul Sayaf has also met the President.

Three years after the formation of the NUG, most of the commitments brought in the agreement that formed this government are yet to be implemented, one of the main reasons behind which is the weak sovereignty of the government.

Here you would read about the past three years of the NUG, the promises made by the NUG’s leaders to the nation, and the future of this government.

The promises of the NUG

About the formation of the Leaders’ Council, the acting spokesman of the Presidential Palace said: “the President does not intend to remain in power after the completion of his term. We are committed to hold elections in its time.” Nevertheless, the question is how much the NUG has respected the promises in the past three years.

The NUG was formed after the longest and most controversial electoral process when the then-US Secretary of States John Kerry brokered a deal between the two leading candidates. There were several important points in this agreement that needed to be implemented:

Currently, it is three years since the formation of the NUG and neither the Loya Jirga was held nor the constitution was amended nor the date to organize such a Jirga is fixed yet. After the second year of the NUG, once again, John Kerry came and extended the Chief Executive’s term for five years.

Now that the Independent Election Commission (IEC) has announced the 16 Saratan 1397 [solar date] as the day of the Parliamentary elections, many national and international organizations believe that judging from the current performance of this commission, it will not be able to hold the timely and transparent elections.

Although the NUG has failed to fulfil many promises, if the promises mentioned above were implemented, the country would have been in lesser problems than it current is.

Failing to fulfil the promises made in the NUG’s agreement resulted in the mistrust towards the NUG in both national and international levels and therefore, there exist no expectation that the NUG will fulfill its promises this time.

The three years of the NUG’s governance

In war-torn country such as Afghanistan, formation of a collative government under the name the national unity government was laying the foundation of a weak government from the beginning.

If we look at the past three years of the NUG, there existed internal differences since ever its formation; first between the President and the Chief Executive and then among the political camps of each. Three years later, these internal disputes continue, the most recent of which almost caused a crisis and the central power was challenged to a high level.

Besides the internal differences, another thing that the NUG brought itself was the waste insecurity in the country. The war extended from the South to the North of the country and war got intensified in the Northern Afghanistan. Kunduz was the first city that since the collapse of the Taliban regime fell at the hand of the Taliban and not once but twice.

Besides that, the territory under the control of the government reduced, the civilian casualties increased, IS began its activities in the country and spread from the east to the north and other parts of Afghanistan, and the mortality rates of the Afghan security forces also increased.

Peace, which is presumed to be the only way forward in order to come out of the crisis in the country, was also something that neither party of the war took any important step towards it. At first, the NUG tries to achieve peace through its foreign policy. As a result of these efforts, the Urumqi, Murree, quadrilateral, Pugwash, Kabul process meetings and some other public and secret meetings were held, none of which has produced any desirable outcome until now.

On the other hand, the announcement of the US new policy towards Afghanistan and South Asia, which rather focused on war, eliminated any hopes left for peace.

In addition, the NUG’s foreign policy was, to a great extent, a reactive and was on the basis of the security situation in the country. The foreign policy was instable and, at some points, unbalanced. Despite all these challenges, most of the NUG’s achievements were in the areas of foreign policy. For instance, attracting foreign aids, commencing some regional projects of energy transfer, and agreements with some countries in areas of transit and trade.

The increasing insecurity, deepened disagreements between the government officials, political instability, a collapsing economy, and an escalated level of poverty and unemployment are issues that currently the government and the people are faced. Due to such a condition in the past three years, the NUG failed to deliver its promises. However, something that the NUG was successful in was its half survival.

Despite the complaints, threats, and demonstrations of the people, political parties, and other national circles from the NUG in the past three years, the NUG has never paid attention to these unhappiness and its seems that it will do the same against the oppositions in the  future as well.

In light of the rumors about forming a Leaders’ Council instead of holding an election, it seens that if the Parliamentary elections were not held, this rumor will be pretty much a reality. Nevertheless, given the current political and security situation and the weak government, it seems that the parliamentary elections will not be held.

On the other hand, the US may also believe that the continuation of the current government in Afghanistan until the end of Donald Trump’s presidency is a good way to further the US interests.