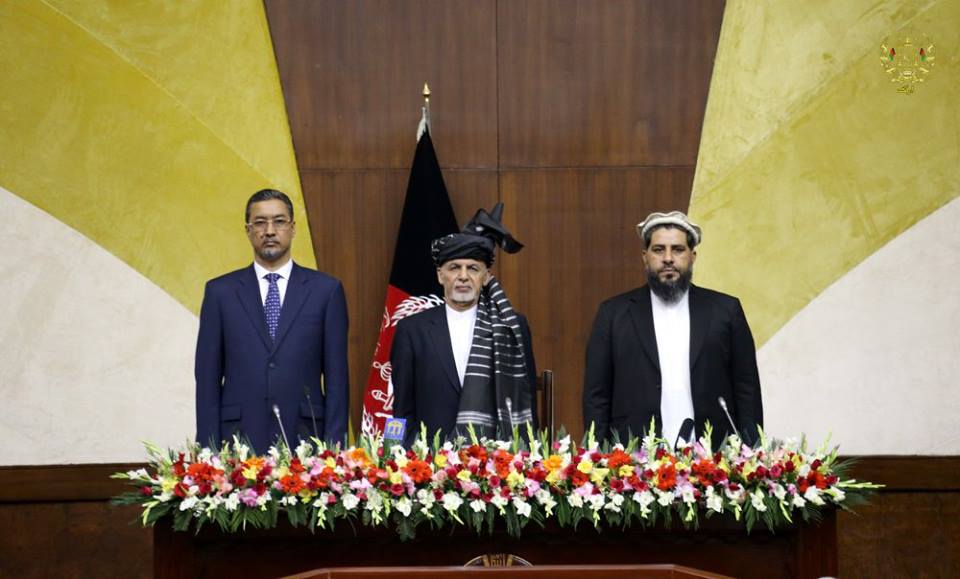 Afghanistan Politics
March 10, 2018March 11, 2018 CsrsAdmin 133 Views 0 Comments Afghanistan, politics, slideshow, The beginning of the third illegal year of the Parliament and the vague fate of the elections, ticker

The eight legislative and the third additional-illegal year of the sixteenth term of the Afghan Parliament was inaugurated with the speeches of the Afghan President on 16 Hout 1396 [solar date].

In this meeting, President Ghani insisted that the NUG was committed to hold the election on its specified time. President Ghani said: “To hold a fair and transparent election is one of the mechanisms for the rule of law and strengthens the legitimacy of the government and people’s trust in legal procedures.”

It comes at a time that the national and international watchdogs do not believe that the elections would be held on its specified time. The Independent Election Commission (IEC) has announced the (14 Saratan of 1397) as the day of parliamentary and district council elections. Nevertheless, one month ago, the officials in IEC said that the elections will not be held on the announced date.

The term of the Parliament, the deeds of Wolesi Jirga in its two additional year and the fate of the upcoming elections are issues that are analyzed here.

The elections crisis in 1393 and the internal conflicts between the leaders of the NUG about the implementation of the NUG agreement and electoral reforms after that, besides increasing insecurities, postponed the Parliamentary elections and the working period of the Parliament was extended until the announcement of the results of the next elections, based on a presidential decree on 29 Jawza 1394 [solar date].

The extension of the working period of Wolesi Jirga was faced with various reactions. Some representatives of the people in the Parliament, lawyers, and head of the Mishranu Jirga termed this extension to be illegal. Nevertheless, some representatives of the people welcomed it arguing that not having a Parliament lack of a third branch of the government. However, three years after that, still the NUG has not been able to hold the Parliamentary elections.

The performance of Wolesi Jirga in its two additional year

1395 was the first additional year of Wolesi Jirga. Based on the findings of Free and Fair Election Forum of Afghanistan (FEFA), in this year the Afghan parliament had held 108 general meetings, 21 questioning sessions, 15 presentation of reports sessions, 6 interpellation sessions, 3 secret meetings, and 55 normal meetings.

In 1395, 41 legal documents including bills and legislative decrees and 38 international agreements were sent to the Afghan Parliament for approval or amendment. From these documents 37 was approved and 3 bills were rejected. Moreover, Wolesi Jirga summoned 22 government official and dismissed 7 ministers.

The second additional and the seventh legislative year of the Parliament had lesser achievements compared to its preceding year and had passed mostly in disagreements. Based on the remarks of Deputy Spokesperson of Wolesi Jirga Erfanullah Erfan in this year Wolesi Jirga has held 1 interpellation session, 54 general meetings, 14 questioning sessions, 3 presentation of reports sessions, and 34 common meetings. Moreover, in areas of legislation, the Parliament has approved 27 legal documents including 3 bills, 8 legislative decrees, 3 financial document and budget, and four international documents.

Overall, the seventh year of Parliament passed with challenges and internal conflicts and in this year some prominent members of the Parliament completely opposed the government.

Another issue that raised the conflict between the Parliament and the government as well as among the members of the Parliament was the issue of organizing a Loya Jirga to amend the Afghan constitution. In addition, the distribution of electronic ID cards was another controversial issue. The Parliament rejected the President’s decree in this regard but Mishranu Jirga approved it and finally, it was approved by the joint commission of both houses of the Parliament.

The fate of the Parliamentary elections

Although President Ghani insisted on the timely Parliamentary elections, but distrusts about the capacity and competence of the IEC to hold elections has increased in both national and international levels. It seems that due to the problems that exist in the IEC, this commission will not be able to manage the upcoming elections and the challenges ahead of it. This is one of the most important factors in the lack of trust towards holding the upcoming Parliamentary, District Council, and Presidential Elections.

The Special Representative of the UN Secretary General to Afghanistan Tadamichi Yamamato had said that the Afghan IEC’s preparations and efforts to hold a timely and transparent elections were not sufficient.  Transparent Election Foundation of Afghanistan (TEFA) and other monitoring institutions have accused the government of intervening in the affairs of the electoral commission and have also expressed concern about lack of preparations for the upcoming elections.

Besides lack of trust towards the IEC, there are some other challenges that will make holding the elections even less probable on a timely and transparent manner:

Internal differences: some watchdogs, politicians, and political parties do not seem to be satisfied with the reforms brought to the electoral system by the NUG because these reforms have not improved the performance of the electoral commissions. Even at the beginning, due to the internal differences of the government, the Selection Committee was formed in a way that did not have the required quality to select commissioners. On the other hand, one of the main steps to hold a transparent election was the distribution of electronic ID cards, while due to lack of coordination and disagreements between the leaders of the NUG, this process of distributing these ID cards were faced with challenges.

Budget: the expenditures of holding the Parliamentary and District Council Elections by the government is said to be $120m, only $30m of which will be prepared by the Afghan government and for the remaining budget, the international community must help. Although the donor countries have promised to make this amount of contribution but they insist that they should be made sure that this money is not wasted and misused. In current circumstances, this issue is also one of the main challenges of the Afghan government, because still the Afghan government is among the most corrupt countries in the world.

Therefore, it seems that due to the various problems, the NUG does not have a solid will to hold the upcoming elections and, thus, this election will be delayed , something that will further undermine the legitimacy of the regime.