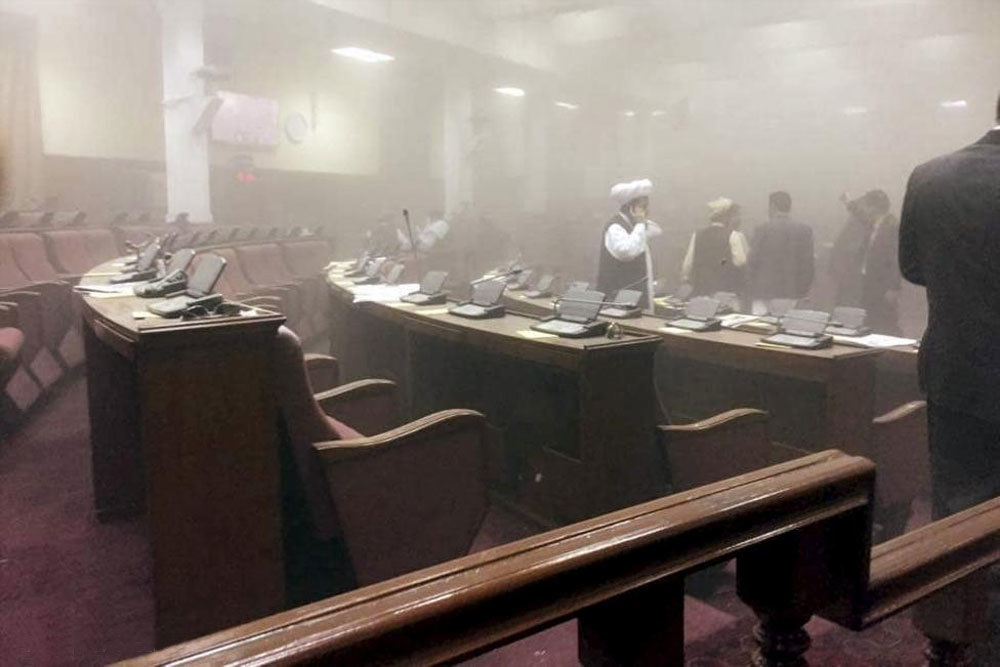 Taliban’s attack on Afghan parliament on the last Sunday, June 21, was widely broadcasted at national and international media, without answering the serious questions regarding the incident by Afghan security officials. The US-supporter media outlets in Afghanistan were busy in discussions on legitimacy and illegitimacy of parliament and suddenly turned into staunch supporters of parliament and considering it “crushing the dignity of nation’s home by the enemies of the nation”. They, in order to, flee from the serious questions that required answers, started propagation for the army soldier that claimed the killing of six attackers on parliament without wasting any bullet.

Simultaneously, the first vice president and former militia commander, General Abdul Rashid Dostum and Balkh’s acting governor; Atta Mohammad Noor formed a military alliance aiming to contain Taliban’s expansion in the northern Afghanistan. When vice president, instead of mobilizing the national army, resorting to making militias, where is the country heading to?

The selective and symbolic attacks have value to the Taliban. Such attacks are usually taking place when all the media outlets are focusing on the particular event.

Such attacks may not have any high profile casualties and sometimes it may look that the Taliban has failed and the attack has no achievement, but it is not important for Taliban. What is important is the impact of such attacks on mentalities outside and inside the country which is reflected by the media outlets that clearly depicts the weakness of the government.

Such attacks are like the cinema theater where the actors are trying to influence more and more audience.

Few years back Taliban attacked the anniversary event of Mujahidin’s Independence Day and dispersed it. The scenes of dispersing the military personal which were in their stylish uniform was broadcasted internationally and since then the government avoided convening such events. Avoiding such celebration in open area was a triumph for Taliban. Because in the past such celebration with public participation was an expression of good relations between the government and the people.

The attack on parliament was more symbolic than the one on Mujahidin’s Independence Day. In this the second vice president was introducing the nominated defense minister for the vote of confidence. Just before it’s entering to the house explosion was suddenly heard and the house becomes full of dust. And thus the event was postponed.

When Taliban attacked the Mujahidin Independence Day (8 Sawr, 1387, April 27 2008), later on they published a video record of the attack. The video clips were showing people from the so called center of command of the attacker where they were watching the event through TV. When the national anthem was played and the audience stand for honor, one of the people calls the attackers and gives the command by saying Allah O Akbar (God is great).

Behind the Scene of Parliament Attack

When Taliban attacked the 8 Sawr event, their armed persons were placed in a building near to parade area, therefore they could understand when to start assault, but in this attack the story is more complicated. As the video from inside the house shows, the car-bomb was exactly exploded when vice president and the defense ministry nominee intended to enter the house. Therefore, those who had the command of the operation were watching the moments through TVs. When the speaker announces that the vice president and the defense ministry nominee are entering the house the explosion takes place, which shows its symbolism. The accuracy of explosion’s time can show who are behind the scene.

According to witnesses, the exploded car was like the bulletproof land cruiser with black glasses. The armed attackers with national army uniform got off the car and then the car was crushed to the southern parliament check point and exploded. The attackers launched RPG fires on the house from the main road and then tried to enter the building which was under construction, but they were shot down by a guard related to a private security company.

Usually, in such attacks which are being carried out by the Taliban the first question being posed is how the attackers are able to enter the very secure and under intense security observation with heavy weapons. It has happened several times during the last ten years in Kabul. Every time the responsible authorities have promised of investigations, but the results have never been announced.

Weakness of Government & the New Alliance in the North

The attackers could not enter the parliament, but it has posed strong criticism of National Unity Government. In this attack, the strange point was that Taliban first acknowledged the responsibility of attack and later on, contrary to the usual, they have not published any details. Taliban web sites were full of the conflicts in Chahar Dara of northern Kunduz province. Though they have promised of publishing the details of the attack, nothing has been published yet.

Before the attack on parliament, Taliban captured two districts in Kunduz province in northern Afghanistan. The recent developments in north have caused concerns of leaders there. Atta Mohammad Noor, Balkh governor and CEO of Jamiat-e Islami party formed a coalition with Abdul Rashid Dostum leader of Junbish Melli party. The weakness of government to prevent attack on parliament can justify the formation of the alliance.

Dostum has expressed that if the government allows him, he would mobilize 20 thousand militias to fight against Taliban, either will kill them or make them surrender.

When Afghanistan has more than 350 thousand armed forces that came into being after thirteen years with high expenses of billions of dollar, even than Dostum insists on militias. It clearly shows that he is not taking the police and army serious and local powers should defeat Taliban.

Taliban has carried out some symbolic attacks paralleled with some organized attacks as a result they have succeeded to capture districts. Though Taliban has no major military achievement, the attacks have definitely created concerns among the security forces that a sort of fifth column is assisting them from within the government.

Though some media outlets have tried to propagate for a soldier for killing the six attackers, to show that the Afghan troops are ready for any Taliban assault. While the recent alliance between Dostum and Noor express the bitter realties that even the media cannot ignore it. Are the leaders in north concerned of Syria incidents in Afghanistan?

Though some consider the alliance in the north a positive step in tackling Taliban, it shows the weakness of central government and will take back Afghanistan to the feudalism and warlordism which the country has witnessed after Najibullah’s defeat in late 90s.

The nation hoped that with the advent of democratic process, the ethnic tendencies will be removed and a strong central government will come into being. But now with the weakness of the central government, once again the local powers are standing.

Keeping in view the concerns of neighboring countries regarding the developments in Afghanistan, they will also try to find proxies in the local powers which will lead the county towards a proxy war.