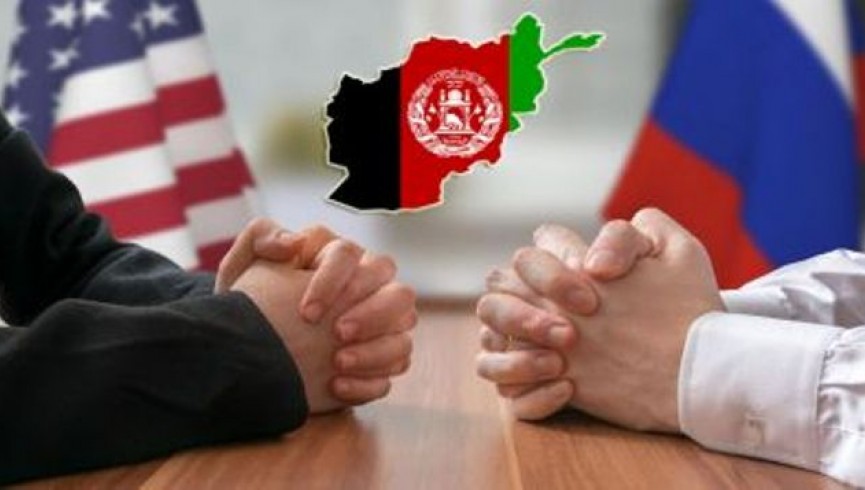 Russian embassy in Kabul refused John Nicolson commander of NATO forces’ claim and analyzed this statement as a trick of putting the responsibilities to others behalf.

Russia and USA have a cold war because of regional and international issues since many years and Afghanistan is changed to a battlefield for them.

Here we have analyzed the nature of Russia and Taliban’s relation, the cold war between Russia and USA and Afghanistan’s position in this disparity.

Relations between Russia and the Tabiban

Taliban got the domination of Afghanistan in 1995 and made a shelter for central Asia’s armed contrary regime which was a concern for Russia. Although, Taliban released reconciliation statements and claimed that no thread would come from Afghanistan, but Russian federation still had concerns and helped anti-Taliban forces.

After the US attack to Afghanistan and downfall of Taliban’s regime, although central Asia and Ghafghaaz forces was present with Taliban army but Taliban made a location in Wazirstan’s regions and far from central Asia’s border, which decreased the concern of Russia.

After 2001 Russian was concerned from gradual increment of poppy and named it “poppy war” against them . USA permitted Russia to take part in anti-poppy operation. Poppy was the reason of relation of Russia and Taliban in 2006 and 2007. Taliban was not interested in preventing from poppy production, so the relation was no longer continued.

From old hatred of Russia and Taliban, this relation is not normal but politic has no permanent friend or enemy. Taliban and Russia hold this relation according to their requirements.

Since Russians believe ISIL to be a serious threat to them and the Taliban are practically in a war against them, Russians have preferred to deal with the ISIL in Afghanistan through establishing relations with the Taliban. There are two probable answers for why Russians chose the Taliban over the Afghan government. First, Russia believes that the Afghan government does not have the ability needed to confront ISIL. Second, Russia accuses both the Afghan government and its foreign allies of supporting ISIL. However, from a different angle, rivalry with the US is viewed as the primary factor behind these relations.

Russia pretends this relation as a political pressure and denies the cooperation of Russia with Taliban, justifies these ties with the need to tackle the threat of ISIL and to ensure the security of its citizens and diplomats in Afghanistan. It seems that Taliban do not expect the cooperation of Russia but can’t refuse the political support of a big country like Russian.

The expression of cold war was used by George Orwell British author after the Second World War in 1945. Cold war is expressed as a competition between west and east countries, communism and capitalism. After Second World War there was a geopolitics problem between eastern block by leadership of Russia and western block by leadership of USA. From 1947 till the downfall of Russia, the cold war between Russia and America has been continued.

After the 9/11 attacks and the US military attack in Afghanistan, a new phase of Russian policy towards Afghanistan started. Although primarily Russia supported the US initiative to overthrow the Taliban regime and form a new government with the support of ISAF, in recent several years, besides regional and international issues, the permanent US bases in Afghanistan and then the emergence of ISIL in this country affected the Russian policy and in the case of Afghanistan, to some extent, Russia put the policy of neutrality aside.

Emergence and expansion of ISIL in Afghanistan altered the geopolitical situation in the region and after the trilateral meeting between Russia, China and Pakistan over the issue of Afghanistan this change revealed itself in practice.

Besides preventing the expansion of ISIL in Afghanistan, Russia uses the option of “relations with the Taliban” as a mean to pressurize the US in other international cases as well and given the recent warning of Russia, it seems that after Ukraine and Syria, Afghanistan will be another area for Russian-American rivalry, which will further complicate the situation in Afghanistan and will turn Afghanistan into a battlefield for another type of proxy wars. But in the current circumstance, when the US and NATO are present in Afghanistan, Russia’s military intervention seems unlikely.

A few months ago, during his speech in Paktia province, the Afghan President for the first time officially accused Russia of supporting the Taliban and said that “The Taliban are receiving assistance from those who have spilled the blood of one and half million Afghans.” Although President Ghani did not mention any country, but it was obvious that he was indicating Russia. It was the first time that a senior Afghan official accused Russia of backing the Taliban.

The geopolitics importance of a country becomes apparent when the powerful countries of the world seek to achieve their goals and interests through the political geography of that particular country and that since Afghanistan had a geopolitical importance and location, the super powers of the world had always paid attention to Afghanistan throughout the history.