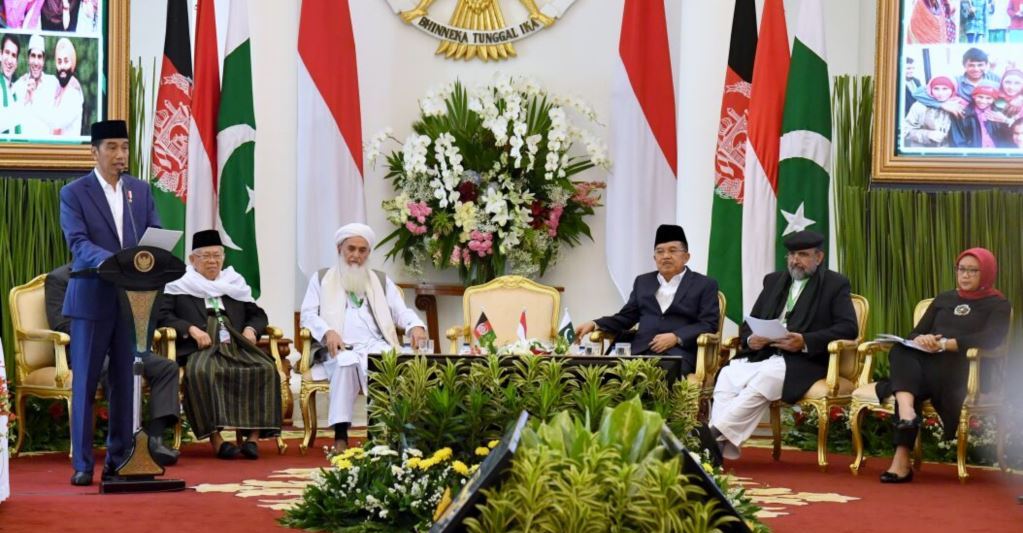 Afghanistan Peace
May 19, 2018May 20, 2018 Admin 476 Views 0 Comments Afghanistan, Peace, slideshow, The Afghan War and the Role of Religious Fatwas, ticker

For the sake of ending the ongoing war in Afghanistan, the Afghan government, pursuing its peace efforts, had made a lot of struggle to convene a meeting of religious scholars in Indonesia in order to be helpful in putting an end to the war in Afghanistan and bringing peace here.

Eventually, the said meeting took place in Bogor City of Indonesia on May 11, 2018, where religious scholars from Afghanistan, Indonesia and Pakistan had participated in it. The Afghan government, however, yearned that the gathered religious scholars would give a fatwa that the ongoing war in Afghanistan is Haram; but, the meeting emphasized that the Taliban should make peace with the Afghan government.

The gathering of Afghan scholars in Indonesia took place while the Taliban has responded the peace proposal of Afghan government in second meeting of Kabul Process with its military operation named “Al Khandaq” and increased its attacks in different parts of Afghanistan.

The ongoing war in Afghanistan, the governments’ peace efforts and the trilateral meeting of religious scholars in Indonesia are discussed in this Analysis.

The Ongoing War in Afghanistan

The ongoing war in Afghanistan started after 9/11 incidents in the United States where this country campaigned on Afghanistan to demolish the Taliban regime and eliminate the Al Qaeda network and thus, it put the base of a new government here.

Apparently, the U.S. attack on Afghanistan, however, was to eliminate the Al Qaeda network and its supporters after 9/11; but, later, it became revealed that it was the only aim of America, because if its goal was to eliminate Al Qaeda and Taliban, it was done in the very first years and there was peace maintained in entire Afghanistan at that time.

The ambassador of Taliban regime to Pakistan, Abdul Salam Zaeef said that: “the 9/11 attacks were not coincidental, but, America, from very far times, had got intention to have military presence in Afghanistan in order to maintain its long-term interests in the region. Taliban had, three times, offered America to try Osama Bin Laden for the incidents of 9/11; however, America rejected this offer every time.” [1]

After America’s attack on Afghanistan and temporary failure of Taliban, the war revived once again and it is being deteriorated day by day in the country. According to SIGAR, now, the Afghan government has hardly have control or authority over 50 percent of the country and the war is as severe as many provinces are encountered the danger of collapse.

Emerge of “the Islamic State” alongside the Taliban is another important and new aspect of the ongoing war in Afghanistan where its activities expended to many provinces in a short period of time and who claimed the responsibility for a series of big and bloodier attacks in capital Kabul.

Considering the deteriorating security situation in the country even after one and a half decade passed of presence of America in Afghanistan, most of researchers and experts have concluded that America does not plan to eliminate “terrorism” and end the war, but it, intentionally, wants to keep the war continued in Afghanistan for the sake of its own interests. America, through its presence in Afghanistan, wants to control China, Russia, Iran and other countries who may create threat for its international hegemony. On the other hand, Afghanistan is very important to America for its location as it is the connecting point between Middle East, South Asia and Central Asia where the last one has tremendous centers of energy in the world. Besides these factors, the natural resources and mines in Afghanistan are something that has made the United Sates to have presence in Afghanistan.

At the first days of America’s campaign on Afghan soil, however, the Taliban became defeated for a short period of time; but it reinitiated the war and made it severe day by day. These circumstances made the Afghan government and International Community to think of peace besides being focused on war, yet these talks were on the level to put an end to the war.

In this regard, various efforts, in recent years, have been made by Afghan government and some independent organizations to have the Taliban to make peace. The High Peace Council (HPC) became established in 2010, then, a lot meetings have been held in different country for reviving the peace talks whose two most important are were those held in China’s Urumqi and Islamabad’s Murriee in last three years. Moreover, quadrilateral meetings had been held in Kabul and Islamabad and two meetings of the Kabul Process became connived as well; however, these efforts are yet to be resulted in peace talks and the process is still encountered failure.

This failure has got two reasons:

First; Afghan government tries to bring the Taliban to peace table through military and political pressures and particularly through Pakistan instead of focusing on eliminating the main factors of war.

Afghan government had been waited for trilateral meeting of religious scholars in Indonesia since several months and it hoped that the gathering would call the ongoing war of Afghanistan illicit and haram, and it was what had not said explicitly in the meeting.

A 12-clause resolution was issued at the end of the 1-day meeting where, at the beginning, it had invited the entire sides involved in the Afghan war to put an end to the war and make peace. Also, it had stated in clause 9, which included more important and clear points, that: “Violence and Terrorism should NOT be associated with any religion, nation, civilization and ethnicity, because extremism and terrorism is in repugnancy with principles of sacred religion of Islam as they promote violence and suicide attacks against civilians. [2]”

The religious scholars’ meeting in Indonesia and the issued resolution is spiritually valuable and the entire recommendations are reasonable; but considering the complexity and situation of Afghan war now, it looks like to be impossible to end the war through meetings and fatwas of religious scholars.