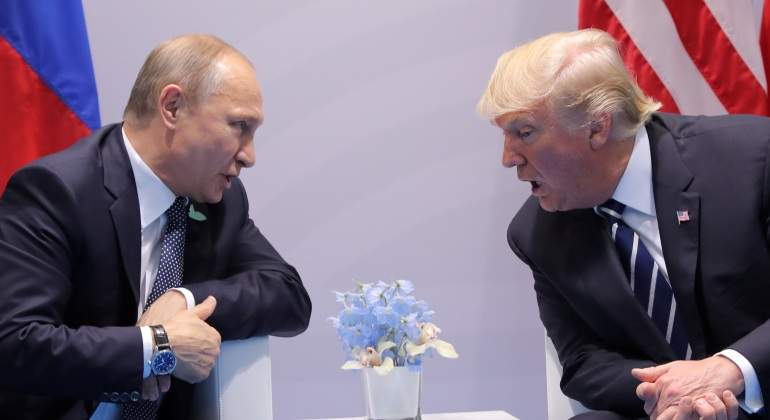 After 2014, the international issues like the Ukraine’s became considered as incidents of New Cold War between Russian and the West and it became unblemished in recent years that there is “New Cold War” going on between Washington and Moscow which has directly impacted Afghanistan as well.

With beginning of this Cold War, Russians have increased their attention toward Afghanistan and thus, Russian officials, through expressing their remarks on Afghan issue time by time, have tried to intensify its engagement in Afghanistan. Last week, the special Russian envoy to Afghanistan, Zamir Kabulov expressed his new position on the Afghan peace and war that were different from the previous ones. America should share the negotiation table with the Taliban; otherwise, it would prepare from an endless war, he said.

In recent months, disputes on Afghan war have been exaggerated between Russians and American and NATO troops deployed in Afghanistan. The issue of Russia’s military assistance to the Taliban is particularly being discussed on international level nowadays.

How the New Cold War between U.S. and Russia revived and extended to Afghanistan? What are the reasons behind recent change in Russia’s position on Afghan issue? And what are the impacts of this Cold War on the situation of Afghanistan? We have tried to answer these questions and other related concerns here.

After WWII, and particularly after 1947, “first” Cold War became started between the Soviet Union and the West where strict rivalry was going on between the East Bloc and the West Bloc (Communism and Capitalism). In 1949, the Cold War paved the way for establishment of world’s greatest military treaty (NATO) by America and Europe. Eventually, two years after its defeat in and withdrawal from Afghanistan, the Soviet Union became collapsed and thus the international Cold War became ended.

In the beginning of 21st century, disparities between Russia and the West, once again, start to rise up in some East European and Central Asian countries. Pro-West government became formed as a result of the 2003 Elections in Georgia which reasoned in attack of Russian on this country in 2008 where Abkhazia became separated from Georgia as an end result. The reason behind holding four controversial elections between 2004 and 2014 in Ukraine were also a result of disparities between Russia and the West which eventually paved the way for Russia’s campaign on Ukraine which resulted in annexation of the Crimean peninsula to Russia through a referendum. It was in these years that the disparities of U.S. and Russia were named “New Cold War”. The Cold War between them, then, entered the most serious phase in the Syrian bloody issue where Russia backs Iran against America and provides military support to pro-Iran regime in Syria as well.

With emerge and expansion of the Khurasan Branch of Islamic State (ISIS-K) in 2015, Russia’s fear became increased and so it accused Americans of being behind the group for many times. Hence, it started to establish ties with the Taliban and, eventually, held a trilateral meeting with China and Pakistan on Afghanistan in late 2016. Henceforth, Russia uses “its ties with Taliban” as a pressure tool in the New Cold War.

What Does New Position of Russian Mean?

A part of the Cold War between America and Russia is Russia’s ties with the Taliban which seems unnatural considering the past enmity between Taliban and Russia; however, the both parties established these ties in view of their own needs and have accepted them. [2]Taliban translate their ties with Russia as their recognition by important regional and world counties; however, Russia justifies its ties with Taliban somehow different. Russia has justified its relations with Taliban in the following three points:

Evident change has been seen in the Russia’s position on its last justification in the latest remarks of Zamir Kabulov where Russia has backed the Taliban’s still positive and want. One day before the second meeting of the Kabul Process, the Afghan Taliban, in its letter[3], had called on US Congress and people to start face to face talks; it was what America had accepted with the group in 2013, and therefore, a political office was opened for Taliban in Qatar.

If latest remarks of Zamir Kabulov are deliberated, they show Russia’s pressure on America and increase of its engagement in Afghanistan as he had said to America, as rail, to learn from Russia and confess its defeat; but for the other hand, his remarks point out some facts as well.

Russia fears from the situation in Afghanistan nowadays. From one hand, insecurity in north of Afghanistan and activities of the Islamic State group has been expanded; from the other hand, the latest report of the Afghan government and the United Nations Office on Drugs and Crime (UNODC) revealed that cultivation and production of narcotics is in its highest level in the country. The opium cultivation increased by 63 percent and the opium production increased by 87 percent in 2017 in compare to previous year of 2016. [4] In the case, America does not pay for removal of opium cultivation this year, according to Afghan officials. [5]Increase in production and smuggle of narcotics is an issue that Russians consider it as Opium War against them, and in 2011, it is why Americans had let Russians to participate in counter-narcotics operations in Nanagarhar in order to mitigate Russians’ concerns in this regard.

Looking at Russians’ increasing fear, perhaps, Russia may concluded that, for the purpose of making the peace process successful and maintaining stability and security in Afghanistan, Americans have to talk with the Taliban and bring the timetable of withdrawing from Afghanistan into the negotiation table. Because the past 17 years of war, the latest positions of Taliban and lack of provision of response to the Peace Proposal of Afghan government have proved that obscurity on the future of the presence of foreign troops in Afghanistan is the main reason behind failure of the peace process. Therefore, the unclearness of American troops’ presence and withdrawal timetable in accordance with new strategy of Trump may elongate this ongoing war which the Afghan government cannot make decision on it.

Its Impacts on the Afghan War

Since Afghanistan is in a very deteriorated political and security situation and as the Afghan President Ghani said, the government cannot survive without the military and financial assistance of America and the West; therefore, the Afghan government, at this time, keep the American side against Russia. For that reason, President Ghani as the most senior official of the Afghan government accused Russians of supplying weapons to Taliban after a bloody attack on Paktika province in late 2017.

Now, for the one hand, Russia has chosen the position which is not in favor of the Afghan government as it wants to bring Taliban into inter-Afghan talks; and from the other hand, its match with the United States is seems to be fortified. Russia and Taliban, however, have not confirmed the accusation of military cooperation; but this position illustrates that if America does not take any action to put an end to the war, Russians, then, would prepare to further harden this war for Americans. A few months ago, Russia had threatened that if America and the Afghan government failed to eradicate the “Islamic State” group, it will make make move action in Afghanistan. A type of Russian military action may be considered as provision of military assistance to Taliban; for the reason that the Taliban are practically engaged with conflict with the group.

On one hand, the new position of Russia is counted as the pressure being put on America in order to make honest efforts in the Afghan peace process; on the other hand, it also means the confrontation and match between two superpowers, which definitely carries representation of making the Afghan war bloodier and elongated. It is in the favor of Afghan government to stay neutral in disputes among America and Russian and other regional powers and, instead of being a battleground for proxy wars, to manage these disputes in the way to get benefited from the situation and coordinate everyone’s interests here.    END