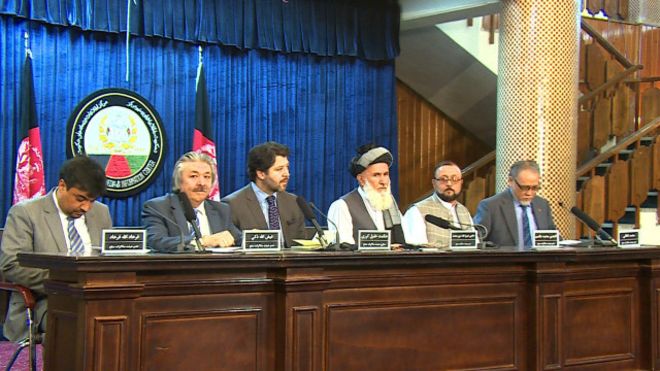 The first known direct talks between Afghan govt. and the Taliban in Islamabad have been welcomed internationally. These talks were taken place in Murree, a tourist spot near Islamabad. Where on the Taliban’s side Abdul Latif Mansour (Nephew of Maulvi Nasrullah Mansoor), Haji Ibrahim (Maulavi Jalaluddin Haqqani’s brother) and Mullah Abbas took part in it, while Hekmat Khalil Karzai (deputy foreign minister), Haji Din Muhammad (a member of High Peace Council), Faizullah Zaki, Asadullah Sadati, Aasim, and Muhammad Nateqee represented the Afghan government.

Moreover, the Chinese and USA representatives were too present as observers and UNAMA, White House, Pakistani Prime Minister Nawaz Shareef, and the Afghan ex-President Hamid Karzai welcomed these talks.

These Peaceful talks happened due to Pakistan’s initiative and the first round of it was in Urumqi, China. However, it is not the first time that the Afghan government is directly talking with Taliban but Islamabad’s meeting differs with all those others meetings. But, still it is wondered whether Taliban’s representatives truly represent them or not?

Islamabad’s meeting and the Taliban’s stance

In this regard, China hosted the representatives of Taliban’s political office and later in February the Chinese foreign minister while visiting Pakistan said that China is ready for a mediating role in Afghanistan. In May, the peaceful talks between Taliban, Afghan government and the High Peace Council were started in Urumqi, China, which was later rejected by Taliban. In Urumqi, the representatives of Taliban were Mullah Abdul Jaleel, Muhammad Hassan Rahmani, and Mullah Abdul Razzaq.

After the first round of talks in Urumqi, hopes were high that the second round of peaceful talks will soon took place in Urumqi,  but when the Taliban rejected the Urumqi talks, as a consequence China halted to host peaceful talks in Urumqi, and then Pakistan’s national security advisor Sartaj Aziz proposed to host this meeting in Islamabad. In this meeting, for the first time representatives of Taliban who were not the members of Taliban’s political office but were part of Taliban took part in the direct talks with Afghan government.

Taliban also didn’t reject Islamabad talks, but after taliban’s declaration, it is understandable that Afghan government have talked with some officials members of Taliban but with one big difference that those who took part in Islamabad talks weren’t a part of Taliban’s political office.

The future prospects of Pak-Afghan ties

When Ashraf Ghani became President, Afghanistan’s foreign policy towards Pakistan was completely changed, and Kabul’s foreign policy became Pakistani centric. Even though, Afghan government hoped that Pakistan will play an important role in Afghanistan’s peaceful reconciliation but as the time passed away Kabul became upset with Pakistan’s double game and afghan government, especially the President, came under public pressure. Therefore, in this regard, the Afghan President wrote a letter to Pakistan and hence the signs of trust deficit incurred in Pak-Afghan ties.

The trust deficit reached to its heights when both Pakistan and Afghan security forces clashed over border in Paktika province, killing 8 pakistani and 1 afghan security personnel. As a result, both countries summons each other’s ambassadors over this border firing and this revealed rift in bilateral relations. But, after this incident, Pakistan’s help in bringing the Taliban to the negotiating table was admired and the Kabul once again looks through hopeful eyes to Pakistan.

The Peaceful talks between Taliban and Afghan government was solely responsible for removing trust deficit in bilateral Pak-Afghan tie and as a result the Afghan government admired Pakistan’s role in hosting and organizing the Islamabad talks. The Afghan Ministry of Foreign affairs said in its press release: ‘The National Unity Government thanks the leadership of the Islamic Republic of Pakistan for facilitating the first meeting and hosting the delegation of the High Peace Council. It also hopes that this cooperation produce practical and tangible results so that both countries enjoy security and stability and both nations are rid of war’[1]

Now the question arises, why the present Taliban wants to hold talks with Afghan government and the Islamic Emirate too didn’t show any serious response to it. Its reason might be that they are holding talks mostly due to Pakistan’s overt pressures. But, those who are closed to Taliban has expressed it clearly that only Taliban’s political office has the right and authority to hold talks and others who do this is in their own personal capacity.

Both afghan and Pakistani government wants to divide Taliban through such talks, and since such talks, they are striving for this motive, But so far Taliban has been successful to preserve their unity. It is from here that Taliban in the last two press releases hadn’t have criticized those who took part in talks and moreover they have shown themselves free of Pakistani pressures. Because, they had only contended that the sole authority to hold talks is with Taliban’s political office.

Since 2007, Pakistan have overt its pressures on Taliban. For instance, Taliban’s two top leaders, Mullah Ubaidullah Akhund and Mullah Baradar, were arrested by Pakistani establishment, where Mullah Ubaidullah Akhund died under Pakistan’s captivity and Mullah Baradar is still under house arrest. In addition, a much closed source to Taliban has told us that since 2007, roundabout 22 top Taliban leaders have been killed by Pakistani intelligence agency, ISI.

The reason behind all this is that Pakistan wants to control Taliban’s foreign policy, but as Ashraf Ghani became President and changed Kabul’s Pakistani policy, the pressures on Taliban got increased and due to these pressures some members of Taliban were forced to sit in Urumqi and Islamabad talks.

As a consequence to these Pakistani pressures, Taliban have changed their policy and now they have given responsibility of internal political and external affairs to Qatar’s office (Taliban’s political office). In this regard, Taliban have stated in its last statement :< on this basis, from now onwards all of Islamic Emirate’s foreign and internal political affairs are entrusted to the Islamic Emirate’s Political office as their sole responsibility. The Political office has full capacity and agency powers to conduct or postpone, in light of Islamic Principles and national interests, negotiations with internal and foreign parties wherever and whenever it deems suitable>[2]

It is understandable from the above statement that Taliban is going through serious period and Pakistan’s Pressure is knowable. Therefore, it is from here that the Taliban in a counter attack have given the responsibility of internal political affairs to its political office, in order to get away Pakistani pressures.

The future of peaceful talks

When the afghan delegation returned home from Islamabad, they hold a press conference and called the Islamabad talks a productive discussion with Taliban and Haqqani members and moreover had called it a vital step towards achieving peace. According to Hekmat Khalil Karzai, Taliban have shared their wish list with them, which is the withdrawal of foreign forces, and the names of Taliban in UN and USA’s blacklists. In this regard, they believed that Taliban’s delegation cam with the permission of their leader, Mullah Mansoor, and had complete authority in the peaceful talks. Moreover, Afghan side is hopeful that the second round of these talks will be soon started after Ramadan.

If there weren’t any pressures from Pakistani side and the Taliban were too happy with such talks, then most probably Taliban might have took part in Islamabad’s peaceful talks. However, not only the Taliban have rejected such talks –Because political office is solely responsible for holding talks and no member of political office had taken part in these talks- but have given the internal political affairs responsibility too to Qatar’s Taliban office. It is from here that we concludes that due to Pakistan’s mediation the peace would not be a real one and the Taliban would too don’t want to show itself as Pakistani stooge.