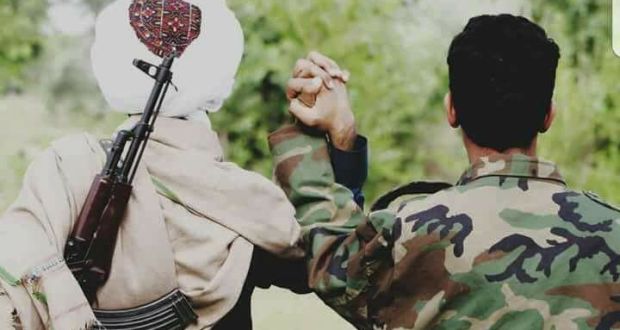 The Taliban declared a three-day ceasefire against government forces for the first time since 2001 and beginning of war against the Afghan government and foreign forces in the country.

The three-day Taliban ceasefire in the three days of Eid was a response to the eight-day ceasefire of the Afghan government from the 27th month of Ramadan to the 5th of Eid al-Fitr; although, the Taliban said in their statement of ending the ceasefire that their action was not in line with the government’s action for the temporary ceasefire, and they had also carried out a three-day ceasefire without prior announcement in the last Eid as well.

The bilateral ceasefire between the government and the Taliban, the effects and consequences of the ceasefire and its impact on the peace process are analyzed here.

The ceasefire of Afghans during the three days of Eid was different from the usual ceasefire in other countries, because on one hand, it was unexpected and without the mediation of foreigners, and was fully observed in all parts of the country by both sides, and on the other hand, the Taliban and the Afghan forces honored Eid’s celebrations in the vast majority of regions, and even Afghan officials met Taliban militants, embraced each other and took memorial photos and selfies.

The state of affairs in these three days was not only astonishing Afghans, but also the world, which brought hopes for extension of the ceasefire inside and outside the country and so it became encouraged by countries and organizations, including the United States and NATO as they also asked the Taliban to extend their three-day ceasefire.

During the three days of the Eid, widespread voices were raised for support and extension of ceasefire and peace demands in all parts of the country, which was why the Afghan government extended its ceasefire in order to encourage the Taliban to have its ceasefire extended. But the Taliban did not extend their ceasefire due to the situation that governed these three days, because the anti-war spirit was heightened in those Taliban members who had meetings and talks with governmental forces.

Impacts and Consequences of the Bilateral Ceasefire

The interim ceasefire between the Afghan government and the Taliban has had implications for both sides, as mentioned below:

The Ceasefire and the Peace Talks

The ceasefire, apparently, without mediation of foreigners, further strengthened the hopes of peace and reconciliation of Afghans and furthered the hope that Afghans are closer to inter-Afghan understanding than ever before.

Compliance of bilateral ceasefire and arrival of Taliban and governmental forces in areas under control of each other during the three days of Eid has been a major development in creating an atmosphere of trust between the two sides of war, which is considered an important and effective step towards the beginning of an inter-Afghan understanding and dialogue between the parties. Meanwhile, High Peace Council (HPC) said that contacts have been made with Taliban officials in these days.

Despite broad support of Afghans for the interim government and Taliban ceasefire, there was opposition to the ceasefire between the government and the Taliban, indicating domestic obstacles toward peace. Therefore, fight against these obstacles is also considered as one of the most important steps towards maintaining peace in the country.

On the one hand, the Afghan president, for the first time, talked about the presence and role of foreign troops in Afghanistan, and on the other hand, the US Department of State also informed its participation in peace talks with Taliban. Former ambassador to Afghanistan, James Conangham, also said in an interview that the United States plays a clear role in Afghanistan, which is why it needs to talk to the Taliban.

However, the parties involved in the Afghan conflict, including the Taliban, have come to the conclusion that insisting on military solutions will not win any party, which is why the Taliban, in their recent announcements, urges the United States to become engage in peace talks with the group. But, in spite of the fact that presently the casualties of foreign troops in the Afghan war are at their lowest level and the ongoing war takes Afghan victims only on both sides of war; the Taliban, through persistence of fighting against the Afghan government, wants the United States to become engaged in peace talks with the group, and thus, it has not got any program for the sake of inter-Afghan understanding yet.

Therefore, although developments have been made to succeed the Afghan peace process due to the recent ceasefire, the peace process will not succeed as long as there is no realistic approach from all engaged parties with the process.