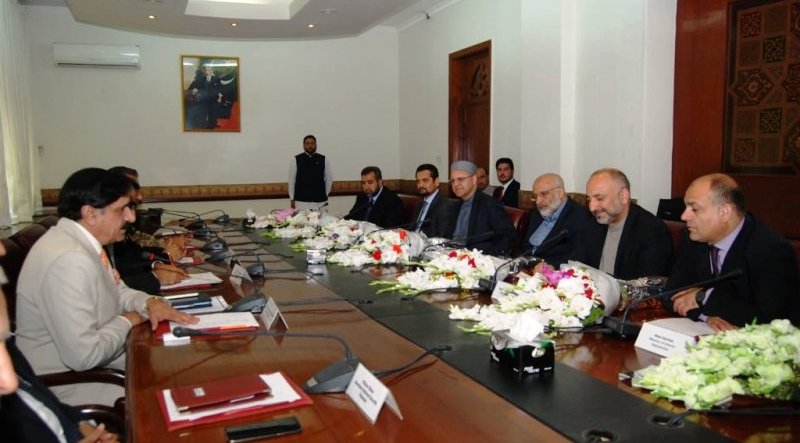 The ties between Afghanistan and Pakistan are, once again, on verge of trust-building and improvement after mistrustfulness and ups and downs during the term of the National Unity Government (NUG).

In recent months, the foreign ministries of both countries have initiated a joint program under the banner of “Afghanistan-Pakistan Action Plan for Peace and Solidarity (APAPPS)” which has paved the way for some political advisory meetings and goes and comes between governmental officials of both countries.

Following the trend, a senior Afghan delegation visited Islamabad on June 19, 2018 where, according to Afghan officials, the agenda of the delegation to Pakistan was to talk with Pakistani officials on the issue of peace and ceasefire with the Afghan Taliban.

The following issues are discussed in the Analysis: Afghan-Pak ties during the NUG; new efforts of trust-building in a mistrustful atmosphere; and new challenges and opportunities toward the peace process.

Kabul-Islamabad ties are always burst of mistrust. Both sides have always doubted on each other’s positions; however, the interesting point is that Kabul, besides the mistrustfulness and doubts, has tried to, first, reconstruct its ties with Pakistan and, then, to take Afghanistan toward peace and stability through relying on these ties. This position has resulted in improvement of ties for short-term; but this policy is yet to have a [positive] consequence in long-term.

Following the formation of the National Unity Government (NUG), Afghan President Mohammad Ashraf Ghani maintained good ties with Islamabad in compare to past administration and provided Pakistan with unprecedented privileges. On the other side, visits of senior Pakistani political and military officials increased to Kabul at that time which was carrying new promises of peace with Afghan government; nonetheless, Pakistan has always failed to fulfill its promises.

After escalation of bloody explosions in Kabul, the policy of President Ghani toward Pakistan became harshly criticized by media, some members of the Afghan Parliament and former governmental officials. Thus, failure of Pakistan in fulfilling its promises and deterioration of security situation in Afghanistan day by day caused in corrosion of Afghan-Pak ties where, even, President Ghani refused Pakistan’s assistance in international conferences and started serious efforts in isolating Pakistan on international level.

Since recent months, efforts on reconstruction of Kabul-Islamabad ties revived after these ups and downs and announcement of new American policy for Afghanistan and South Asia; the senior officials of both sides visits each other’s country; there is flexibility seen in the policy of Afghan government with regards to Pakistan, and apparently, Pakistan also wants its ties to become improved with the Afghan government.

While the mistrust was on the peak, bilateral political advisory meetings started between two countries after the arrival of Pakistani delegation led by Deputy Foreign Secretary Tehmina Janjua in Kabul on Asad, 1396 (Solar Year).

Pakistani delegation talked with Afghan delegation led by Hekmat Khalil Karzai, Political Deputy Foreign Minister of the Afghan government regarding trust-building between the two countries, intensification of political, trade and transit ties, maintenance of security along the Durand Line and the Afghan peace process. Meanwhile, both sides considering various mechanisms agreed to make efforts with aim to build mutual trust between both sides.

These political advisory meetings took place many times between appointed delegations of both countries in Kabul and Islamabad and eventually, Pakistani premier Shahid Khaqan Abbasi arrived in Kabul on April 6, 2018. He met Afghan President Ashraf Ghani and made agreement on some principles for the purpose of implementing the Afghanistan-Pakistan Action Plan for Peace and Solidarity (APAPPS).

The two leaders agreed to the following;

Efforts on reconstruction of Kabul-Islamabad ties and realization of the agreed actions between the two sides speeded up after the arrival of Shahid Khaqan Abbasi in Kabul. On May 28, 2018, Afghan National Security Advisor, Hanif Atmar, Director-General of the National Directorate of Security (NDS) and Interior Minister, Wais Ahmad Barmak arrived in Pakistan and talked on Peace and Solidarity Action Plan with Pakistani officials.

On June 12, 2018, Pakistani Chief of Army Staff, Javed Bajwa also arrived in Kabul and met Afghan officials. On June 19, 2018, Afghan National Security Advisor, Hanif Atmar, Director-General of the National Directorate of Security (NDS) and Interior Minister, Wais Ahmad Barmak arrived in Pakistan for the second time after Taliban ended its 3-day ceasefire from one hand, and from the other hand, leader of Pakistani Taliban, Mullah Fazlullah became killed as a result of airstrike of Afghan and American forces in Kunar province of Afghanistan.

Latest developments in Afghan Peace has emerged new challenges and new opportunities in our region and country. The new challenges are increasing role of Russia and Iran and their deteriorated ties with America. Due to this, it is thought that the expanding relations of these countries with Afghan Taliban have complicated the way and conditions of the Afghan Peace.

On the other hand, 3-day ceasefire between the Afghan government and the Taliban which was successfully realized by both sides has revived hopes on peace and became considered as an opportunity. Moreover, new emerging peace-related wave of people inside the country and a little bit change in America’s position toward the Afghan Peace are also counted as new opportunities for peace.

The above-mentioned points are of those kinds which require immediate and new actions of both sides involved in the issue of peace. The peace policy of Afghan government is, however, still relied on honest efforts of Pakistan and thus, the efforts on reconstructing the ties of both sides are going on. Nowadays, there is lack of hope in regards with new developments of Afghan-Pak ties because recent efforts of Pakistan are the result of international pressures and it is thought that Pakistan made these efforts just in order to ease these pressures.