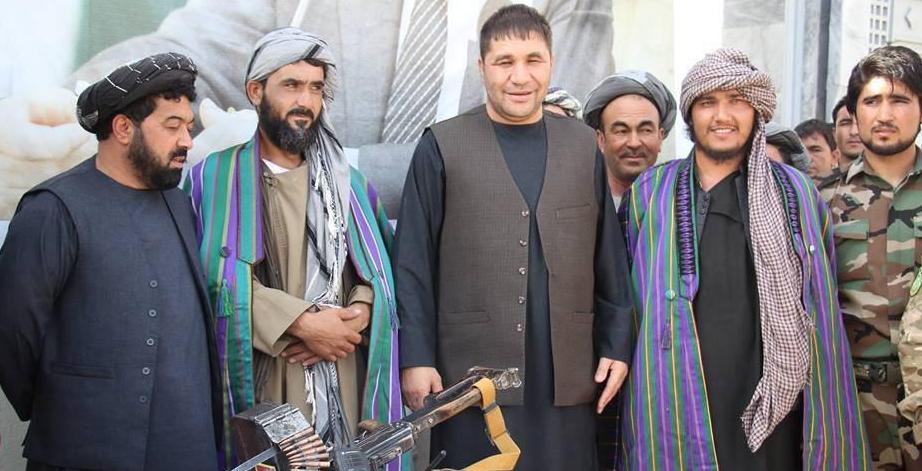 Apparently, local armed forces are militias that have been formed by America and the Afghan government for the purpose of maintaining security. From one hand, these armed militias, however, defended their areas against the government’s armed opposition in short-term, but from the other hand, they are turned into power islands after a while and, in return, are caused threat and challenge to the government.

Among these armed militias, pro-Junbish Party commander of local armed militants and special envoy of Gen. Dostum in Faryab province, Nizamuddin Qaisari is one who used the weapons bought by government’s money against the government and even directly threatened high military officials with death in a meeting.

Nizamuddin Qaisari, who is detained by the government, emphasizes that he will answer the entire allegations; however, his fans in Jawzjan, Faryab and Sari-Pul provinces embarked violent protests and asked for his immediate release.

You would read the Analysis on the phenomenon and activities of local armed militias in Afghanistan, their role in the creation of Power Islands and eventually their clash with the government here.

Local armed militias have been used in order for security to become maintained in the country and this trend has got long history in Afghanistan; however, after the coup of 7 Saur of 1357, the militias took the ethnic color during the communist regime in the country, and after that often have created barriers against Afghan governments, itself, or have caused ethnic and tribal conflicts as well.

After America’s campaign on Afghanistan and collapse of the Taliban regime, the Disarmament, Demobilization, and Reintegration (DDR) program and then the Disbandment of Illegal Armed Groups (DIAG) program became launched in the very first years for the purpose of disarmament of illegal armed men and strongmen; however, after some years passed and the war flared up, the forces that had spent millions of dollars on eliminating militias, begun to reestablish the local armed militias.

After Gen. Petraeus became appointed as general commander of international forces in Afghanistan in 2010; he presented the proposal of establishing local militias based on his experience in Iraq. The Afghan government also ratified the proposal under the name of Afghan Local Police (ALP) in entered into force after President Hamid Karzai signed it in 2011. Now, there are about 30,000 ALP forces in the country.

For the very beginning, most of the militias groups were created grounded on tribal considerations instead of national motive and, in most cases, their commanders were either strongmen or former militants who had got a background in criminal activities which caused them to become widely accused of illegal and anti-human activities.

Establishment of local militias by America was encountering Afghans with the threats from which they had got too bad experiences. The international community neglected these experiences and paved the way for strongmen and former militant commanders to create armed militias under the banner of “Local Police”.

Unlike the recruitment mechanism and process of government, illiterate persons who had a criminal background and were not committed to order and laws have been recruited there due to the insinuation of foreign forces, local strongmen, and commanders. It is why they have conducted illegal activities in most of the areas in Afghanistan and have established small islands of power where they are often accused of illegal and anti-human activities.

Murdering and torturing innocent people, thefts, rapes and ten of others are among the crimes that are committed by local armed militias, according to the reports of international and national human rights institutions. [1]

According to the 1391 report of Afghanistan Independent Human Rights Commission (AIHRC), “Local Police” have worked for insecurity and have caused an increase in violence in different parts of the country. The report also indicates that the “Local Police” does not obey the order of the central government at all, and most of its members are those who previously were active in illegal armed groups.

On the other hand, a 2011 report of the Human section of UN had said that under-age small children are recruited in the ranks of the Afghan Local Police in some areas of the country and are used for sexual purposes.

Clash between the Government and Local Armed Men

Nizamuddin Qaisari is the police chief of Qaisar District of Faryab province and is commander of hundreds of pro-Junbish Part militias there, who, apparently, is fighting on the side of government against Taliban and Daesh (ISIS); however, his power and authority caused him to make harsh remarks against Afghan military authorities and to threaten them during a security meeting in 209 Shaheen Corps of the Afghan Military on July 2, 2018.

According to the statement released by 209 Shaheen Corps, Qaisari called the participants “traitors” and told them that “I am going to kill you, give fire to the governmental institutions and abolish the governmental system in Maimana”. The statement added that he took his weapon after these remarks and armed conflict came to the ground, and eventually, Afghan security forces arrested him and, then, transferred him to Kabul.

First; the ethnic nature of local armed militia in Afghanistan is a fundamental problem due to which several clashes have occurred between these militias. These militias have always taken supported their own ethnic and stood against government’s positions.

Second; local armed militias are most active in areas where other government forces have less presence. Thus, they are not only able to get use of the power and facilities, but they are also able to easily resist against the government in case of pressure being put on them by people and government.

Third; local armed militias are not given militating guidance and training. Meanwhile, the government does not observe the affairs and activities either. Therefore, a large number of them freely torture the people, do thefts and even assault on people’s wealth and honor and this issue have increased the distance between the people and the government.

A large portion of the money and international assistance arrived in Afghanistan in last 17 years for the purpose of maintenance of rule of law and formation of local forces have been given to persons who built their own islands of power with these privileges and creased barriers against political and security stability of the central government.

After formation of National Unity Government (NUG), actions taken against the autonomous activities of first vice-president, Gen. Dostum point out to decisive measures of the government against eliminating the power of local armed militias, especially in the north of the country.

The political settlement with Balkh’s provincial governor, Atta Mohammad Noor was also a struggle for weakening the strong island of power in the North; however, the Afghan government is still faced local powerful strongmen in different parts of the country which we could name the Kandahar Police Chief’s rebellion as an example.

A few days ago, President Ghani in his speech in 201 Selaab Corps said that irresponsible armed men are not acceptable to him anymore and he is decisive to hand over the irresponsible armed men to the judiciary. For that reason, the government arrested Nader Shah in Badakhshan, and Rahimullah the former intelligence chief of Uruzgan province in Kabul, besides Nizamuddin Qaisari in last one week only. The government says that numerous accusations of breaking law and misusing power are filed against them.

Despite all these things, it would be said that ethnical politics and local armed militias in Afghanistan have always threatened the country’s political and security stability and have caused in disunity among brother tribes of and civil war in Afghanistan. Hence, preventing the creation and empowering of local armed militias is needed before every other thing. The government’s recent measures against local armed militias, however, cause some circles and politicians to put pressure on the government in response; but the government should note that if it eliminates the power islands, it should be ready to stand against these pressure at first place.