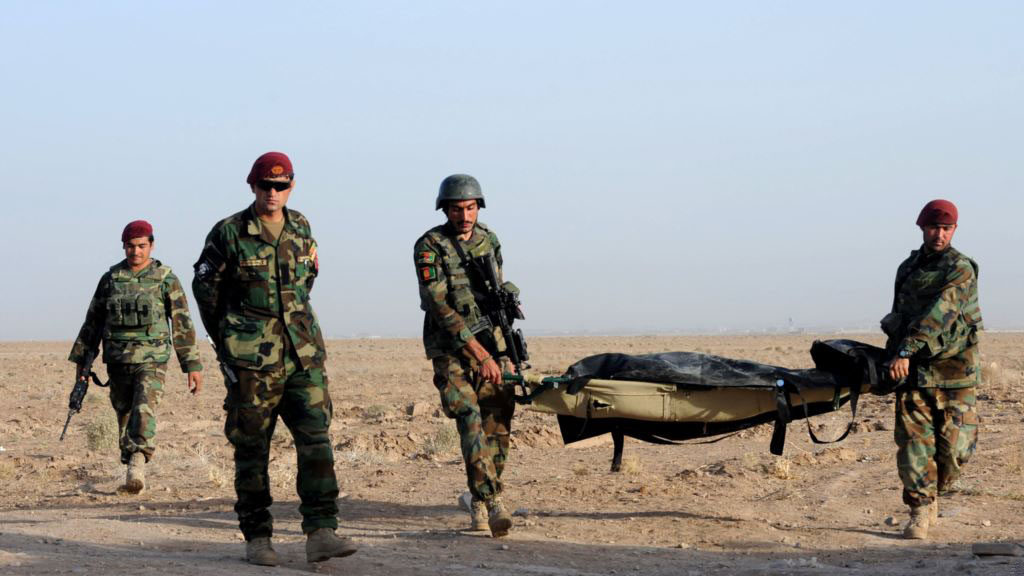 The American troops have said in a statement that the attack was ‘mistakenly’ took place and hence they are apologized for it. However in past years, the American Security Forces have targeted the Afghan Security Forces in the same fashion and in some cases the American interpretations were that the Afghan soldiers didn’t had wear the military uniforms. But in the recent incident of American ‘friendly fire’ it is reported that the military checkpoint had three-colored afghan flag and moreover the whole Afghan soldiers wore military uniforms.

The attack took place just a day after General Martin Dempsi, US head of army staff, came to Afghanistan in an unexpected trip to emphasize on joint fight against terrorism and ISIS danger in Afghanistan.

The background of ‘friendly fires’

Since 2001, the US military forces had targeted and killed Afghans, and in many occasions the casualties were civilians.

The first attack took place in Urozgan province, where the Americans targeted a wedding ceremony by killing dozens of civilians, including the bride. At that time, Afghan officials supported the American claim that Mula Biradar participated in this wedding and the bride was also a relative of him! Hence killing of dozens of people was a part of fighting terrorism. After that, it cleared that the casualties were relatives of those people who helped Hamid Karzai in the ousting of Taliban.

The Aziz abad incident in Shin Dand is another mentionable incident, where civilians were bombarded, their homes were leveled to earth and thus many were killed.. The delegation, which was appointed by Afghan government to investigate the incident, reported the opposite story of foreigners’ claim that many Talib fighters were killed in this attack, and said no Talib fighter were present at that time in the area.

In another incidence, which took place just few years ago in Kundoz province, where the stolen tankers were bombarded at such period of time when the Taliban had just left the area and people were gathered to take oil. As a result, more than 100 local people were killed due to German forces airstrikes. But, the German government didn’t even paid the victims’ families.

Besides this, many other attacks and ‘friendly fire’ took place against Afghan security forces in different parts of the country, which caused many casualties..

This kind of attacks reached its heights and finally made the President of the time, Hamid Karzai, to strongly condemn these incidents and later effected Hamid Karzai’s decision to not sign the Bilateral Strategic agreement with the USA. Now, and again, it is cleared that this agreement which says will bring American security forces under lawful regulations in Afghanistan, but based on State’s law!

BSA: its outcome is against its interpretations

When the voices to sign BSA were on the rise, the people who surrounded Hamid Karzai were trying to interpret this agreement as the only solution for the pains of Afghanistan. They believed that this agreement would make the foreign security forces more responsible and would bring them under lawful regulations.. And Americans will not be able to do arbitrary operations, however, now, we sees that Americans are doing what it had done before the signing of BSA- arbitrary operation and without coordination of Afghan security forces.

In the first paragraph of article 2, it is stated:

The third and fourth paragraphs also emphasize on this issue:

The usual investigations of ‘friendly fires’

In the past 14 years, it is experienced that whenever foreign security forces have promised to investigate such type of incidences, the results have not been showed publically. For this incidence, we can easily predict and say that as usual the outcomes of investigation will not be made public or the foreigners may claim that they have been targeted and in return they have showed their reaction.

The Afghan security forces emphasizes that they have not requested an airstrike help from Americans and the American operations took place without their consent.

The ‘friendly fire’ and the national unity government’s response

The statement of presidential palace (Arg), which is the top authority in the country, have showed weakness and unwillingness to protect the lives of its citizens. It can be said that the statement of Presidential Palace was a carbon copy of American Security Force’s statement, which regretted upon the loss of Afghan soldiers, have sympathies with the victims’ families and appointed a delegation to investigate the incidence.

The Presidential statement did not have hinted to the commitment of BSA that American forces had in Afghanistan, and with a soft request, they have demanded that such sort of incidents should not occur in the future. This means that the American forces were cautious but they need to be more cautious.

A few Afghan parliamentarian members have asked legal actions against the criminals of this incidence. If by legal actions we mean that American should be responsible for the violation of BSA agreement’s commitments, then in this case, Afghanistan cannot do anything. In BSA it is not cleared that if Americans violates the BSA agreement’s commitments then which source can reach Afghanistan’s objection.