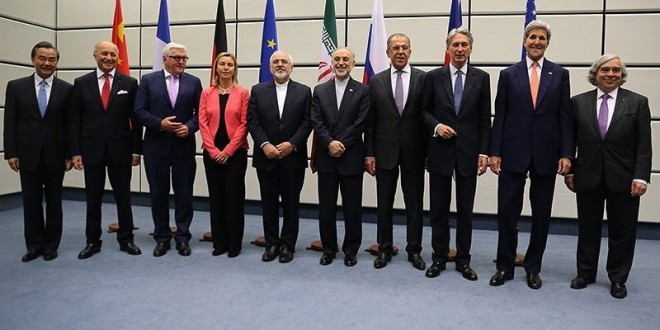 Since many decades, one of the reasons behind the soured relations between Iran’s Islamic revolution with Saudi Arabia and Israel is the Iranian nuclear program. These two countries didn’t only consider the nuclear-armed Iran as a threat to its national security but they also see it a threat and hindrance to its (Saudi and Israeli) heavy influences in the region, Middle East. Therefore, it is from here that some of Arab states and Israel becomes closed to USA and on and off they welcomed the economic sanctions and even invasion of Iran by USA.

Over the years, Iran and USA had negotiations over Iranian nuclear program but when Hassan Rouhani became the President of Iran the negotiations were increased and after arduous talks that spanned 18 months, the USA and other five countries (Russia, China, Germany, UK, and France) reached a ‘framework’ agreement in Lausanne. And after further four months of negotiations, they reached a ‘historical’ agreement in Vienna.

The world leaders’ and countries’ instantly responded to Iran’s nuclear deal. Many countries supported the west-Iran nuclear deal and the UN Security Council also unanimously endorsed the Iranian nuclear deal by adopting 2231 resolution.  However, on the other hand, some of Middle Eastern countries oppose this deal and because of this deal their relations with the USA is becoming strained. In order to reassure their Middle Eastern allies, President Barack Obama sent his defense secretary Ash Carter to visit Saudi Arabia and Israel, where he met King Salman of Saudi Arabia and Prime Minister Netanyahu of Israel.

In addition, the western media is publishing stories about Washington’s militarily helping and enhance defense cooperation with Israel, so that it could reduce Israeli oppositions regarding this nuclear deal.

The Iranian nuclear deal with 5+1 countries of the world will have deep impacts on Iran, the balance of power- in the region- would be disturbed and International politics would be influenced. But, here, we would discuss the impacts of this deal on the region and especially on Afghanistan.

A review of Iran’s nuclear program

The Iranian nuclear program was launched in the 1950s with the help of the United States as part of the Atoms for Peace program. The cooperation was changed when the US gave five megawatt research reactor to Iran. During the decade of 50s, Iran enjoyed friendly relations with the United States and Tehran was attributed as the policeman of US interests in the region, Middle East.

In 1979, Raza Shah Pahlavi formed Iran’s atomic energy organization and he expected to produce 23000 megawatt electricity, but with the Islamic Revolution of 1979, the relations of Iran and US suspended due to few reasons, which are as bellow:

With the deterioration of the relations, US stopped its Aid to Iran, though it had a peaceful nuclear program. Besides, Iran was dragged in a nine-year-old devastating war with Iraq. Most of the thinkers believe that at this time Iran decided to have nuclear program to safeguard its security.

According to IAEA, Iran received some technical assistance from Abdul Qadir Khan in 1987. In the 90s, the United States imposed some embargos on Iran and it was increased during 2002-2014 era. In this period, Iran opted for negotiations, but the process faced certain difficulties.

When Hassan Rouhani reached the power in 2013, the negotiations started once again and it was the first time in the last two decades that the two leaders had a telephonic conversation.

Initially, when Rouhani came to power, the United States and Iran forged a six months short-term agreement. According to it, Iran could not enrich uranium for six months and US will not impose any further embargos.

On April 3 Iran and 5+1 reached to and agreed framework in Lausanne and after further four months of arduous negotiations, Iran and 5+1 countries reached a historical agreement in Vienna.

The media had published many stories regarding President Obama’s doctrine and in this regard he has acknowledged it too while giving an interview to New York Times. He said he is “absolutely committed to making sure that they [Israelis] maintain their qualitative military edge”. But beside this, Obama wants to break free from long-standing US policies isolating Myanmar, Cuba and Iran. It is from here, he re-started diplomatic relations with Cuba after five decades and now with the rising of Islamic State in the region, it wants to have a nuclear deal with Iran.

In this regards, Professor Ahmed Mousali of Beirut American University is of the opinion that Americans knew that they can’t field their army to fight Islamic State and they also knew that it is Iran who can only fight the Tafkeeris. This is the reason that Americans have reached an agreement with Iran due to which Iranian economy would be positively influenced. For instance, their frozen assets of amount $120 billion would be returned back, Iranian banks would be connected to SWIFT, the Iranian oil exports would be increased by 50 % and in addition many foreign investors are showing their interests to invest in Iran and catch up Iranian markets.

This nuclear deal is happening in such period of time that from one hand USA wants to make an alliance against Islamic State. For this motive, recently the American Chief of staff had also visited Afghanistan. On the other hand Iran is also considering Islamic State a threat to its national security and hence it is after such an alliance which would be against the Islamic State.

Middle East: Saudi Arabia and Israel have responded to Iranian nuclear deal, because both consider Iran as their prime enemy. Israel is blaming Iran for supporting Hamas and in addition Iran is considered a strategic and regional rival of Israel too. While on the other hand Saudi Arabia has ideological and strategic differences with Iran.

In a swift reply, Israel has called this nuclear deal a ‘historical mistake’ and Israeli Prime Minister Netanyahu is of the opinion that this deal would make Iran a nuclear power within weeks, billion dollars will pour on Iran due to lifting of economic sanctions and embargoes, and in the end Iran would consume this money on its ballistic missiles and in addition it would further support its allies in the region such as Hezbollah.

Saudi Arabia is also anxious over this deal, because it fears nuclear-armed Iran. Therefore, when Ash Carter visited Riyadh and met King Salman in the last week, they demanded if Iran violates the articles of the aforementioned agreement whether economic sanctions would be reapplied on them or not? In this regards, Ash Carter affirmed, it would certainly be the case, if Iran violates the terms of Agreement.

South Asia: Pakistan would looks more favorably to this deal, because from one hand it would increase its bilateral trade with Iran and on the other hand it would help them to start joint economic projects-like IPI gas pipeline- that was halted mainly to American pressures.

India has also welcomed Iranian nuclear deal and thus sees it in its favor, because it would boost Indo-Iranian cooperation in Energy, trade and economic sectors.

Iran has abundance of natural gas and oil fields, while India is one of the largest importers of energy (Gas and Oil) worldwide. Therefore, Iran can help India in this regards. In 2008-09 years, India was importing 17% of its total imported energy from Iran, but with the economic sanctions imposed on Iran the Indian imports of energy from Iran was decreased and now it is only 6% of India’s total imports of energy. In addition, this deal would open the doors for more cooperation in transit and strategic fields between India and Iran.

The Impacts of Iranian nuclear deal on Afghanistan

Many Afghans are anxious over Iranian nuclear deal because they feel that the economic rise of Iran would further empower the Iranian strategic allies in Afghanistan and moreover Afghanistan would foresee a cultural invasion from Iran, too. But, some other Afghans have different of opinion, they believe that this deal would benefit Afghanistan and hence it would positively influence Afghanistan in trade, strategic and economic sectors. However, apart from these two views, this agreement would have both positive and negative impacts on Afghanistan.

On the one hand, Afghanistan will take benefits from the Iranian nuclear deal, because it would make ground to easily enter with Iran into some joint projects such as Iran-Afghanistan-China gas pipeline. But, on the other hand, it would make Afghanistan a rival and engage it in a competition with Iran when it comes to transfer of energy pipelines from their respective soils. Afghanistan’s biggest problem is that now and then its insecurity intensifies and hence it is not become able to transfer energy pipelines from its soil, namely TAPI and CASA-1000.

Moreover, due to Iranian nuclear deal, the prospects of cooperation between Iran and USA in Afghanistan would increase. With it, as it is said by Iranian ambassador to Afghanistan-Muhammad Reza Behrami- with the lifting of economic sanctions from Iran, it would boost the chances of more Iranian FDI (Foreign Direct Investment) in Afghanistan.

The Iranian nuclear deal would also help Afghanistan in a transit sector and it would greatly improve the chances of successfully initiating the Chahbahar Port in Iran, where the Indians have invested.

It would increase the bilateral and multilateral trade of Afghanistan with the world. Because, last years have showed that Afghan business men and traders had faced many problems in Pakistan and even with the improvement of Pak-Afghan ties the afghan traders problems have not been solved yet. On the other hand, due to APTTA agreement and strained Indo-Pak relations Afghanistan cannot directly engage with India and with the successfully operation of Chahbahar Port in Iran, Afghanistan can have an access to India and play a transit route to Indian and Iranian exports to some of central Asian countries, namely Tajikistan and Uzbekistan.

On the negative aspect, there are many worrisome arguments attached with this Iranian deal. With the lifting of economic sanctions, Iran would have greater resources to openly initiate its activities against the presence of Islamic State. If the Iranian activities aren’t channelized through afghan government then it is possible that Iran would empower its allies in Afghanistan to fight against Islamic State in Afghanistan. In addition, this perspective is also common that after this deal, Iran and Pakistan and other regional countries would be involved in a new regional game and proxy war inside Afghanistan.