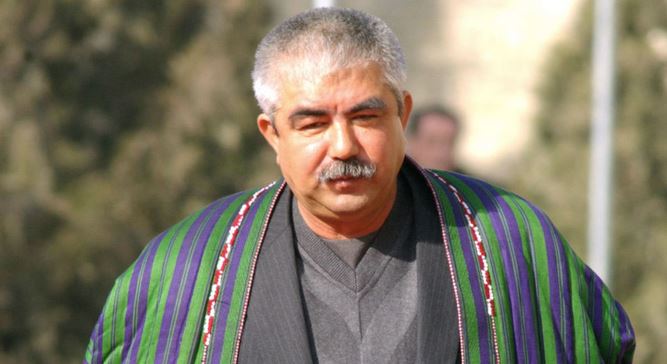 The Afghan government; however, states “sickness” the reason behind his stay in Turkey but almost a year and half ago, after he entered into conflict with the government, Gen. Dostum accused both leaders of the National Unity Government (NUG) of sectarianism and monopoly. Following these disputes, Gen. Dostum was accused of sexual abuse of ex-Jawzjan governor; Ahmad Ishchi, and the case eventually caused him to leave the country and go to Turkey.

During the last 14 months; Gen. Dostum, to a large extent continued his disputes with Afghan President and formed the “Coalition for the Rescue of Afghanistan” as an opposition standing against the Afghan government. Last year, a series of reports were published about a private jet carrying Gen. Dostum being denied permission to land at Balkh International Airport of Afghanistan after arriving in the country, on orders of the central government. Thus, his private jet first returned to Turkmenistan, and then to Turkey.

The issues on the role of Gen. Dostum in Afghan politics, his friendship and disputes with President Ghani and what the likely consequences of Gen. Dostum’s return to Kabul are discussed here.

Gen. Dostum is a person with little to no education who rose from being a worker to being a military General. He has featured as a prominent figure for every head of state in the Afghan politics, where each head of state has always sought to have him on their side.

Dr. Najeeb was the first Afghan head of state who tried to have Gen. Dostum on his side and thus granted him the rank of General and made him the leader of a number of local armed militias. These militias are called “Gilim-Jam” for their brutality, loot and other crimes. People have bitter memories of these militias in the Najeeb Administration, which in many ways  opened the door to ethnical disputes.

After the collapse of the Taliban regime and establishment of a new government, Gen. Dostum also remained a notable figure in the ex-President Karzai’s eyes as well. He became first vice-president with the formation of National Unity Government (NUG), who, according to law, may substitute the President in his absence and control the overall affairs of the country.

Overall, Gen. Dostum has remained a high official in the political field and has always retained prominence for governmental leaders in every system. The reason for such importance given to him lies in his influence as the founder of “Afghanistan Islamic Movement Party” known as “Junbish” which holds the support of the absolute majority of Uzbeks and Turkmens alongside the support of regional countries with Uzbek and Turkmen roots. Therefore, politicians from Dr. Najeeb to Dr. Ghani have had him on their side in order to  reach power through him.

Disputes Between Dostum and Ashraf Ghani

Ashraf Ghani appointed Gen. Dostum as his First Vice-President in the 2014 Presidential Elections. He played a key role for taking President Ghani into the Presidency.

Gen. Dostum’s involvement in war has, to a large extent, kept him away from political decisions. Judging from the disputes among both leaders of NUG and conflict of interests present since the beginning, it would seem that the conflict between President Ghani and Gen. Dostum has also been from the get-go.

On October 25, 2015; First Vice-President Gen. Dostum, during a press conference, accused the President and Chief Executive of Afghanistan of sectarianism and monopoly adding that “they have appointed someone in the Defense Ministry that cannot walk properly. Stanekzai is famous with the title of “Talib” and does not know who he gets orders from. He was unable to receive the Confidence Vote from the Parliament and is held responsible for the murder of Rabbani.”

After these disputes, Ahmad Ishchi, former Jawzjan governor and Deputy Chair of Dostum’s Junbish party accused First Vice-President, Gen. Dostum of keeping him captive in his private prison for five days while torturing and sexually abusing him, and recording the ordeal.

The remarks of Ahmad Ishchi were given wide coverage by domestic and international media and provoked the reaction of the International Community. The Presidential Palace of Afghanistan issued a statement and promised that they will follow up on the issue with seriousness through judicial structures.  Gen. Dostum left the country for Turkey as a result of the case, and apparently publicized his trips purpose as being for medical treatment. As the political disputes rose to a peak, he formed the “Afghanistan Rescue Coalition” along with the Jamiate Islami Party and Wahdate Islami Party of Afghanistan in Turkey.

The Return of Gen. Dostum  to Afghanistan

After being accused of sexual abuse of  Ex-Jawzjan governor Ahmad Ishchi, Gen. Dostum went to Turkey following his dispute with President Ghani and stayed there for 14 months. However, his case is still undergoing judicial proceedings.

The following points are noteworthy in this regard:

Firstly; after the government detained Nizamuddin Qaisari- special representative of Gen. Dostum in Faryab province, thousands of people took to the streets in many parts of the Northern provinces and blocked the highways, shutting down trade centers and government offices. The return of Gen. Dostum to the country and release of Qaisari were two main demands from protestors. At first, the Afghan government tried to control the protests leading to protestors suffering some casualties, however, the protests intensified and continued for 20 days. Thereafter, the Afghan government was complelled to deal with Gen. Dostum and return him to the country for the sake of ending the chaotic situation.

Secondly; securing and holding the upcoming Parliamentary Elections in Northern provinces were important and thus striking a deal with Dostum was crucial. Also, the government’s efforts at trying to weaken the opposition “Coalition of the Rescue of Afghanistan” through quelling the situation with Dostum is aimed at avoiding any hurdles he may create during upcoming elections.

Thirdly; due to Dostum’s wide influential position and important role in boosting President Ghani’s position in the previous Presidential Elections through votes garnered through him, President Ghani tries to once again have Dostum in the upcoming Presidential Elections on his side in order to defeat his political rivals. However, it is yet to be seen whether Gen. Dostum will remain on the side of Ashraf Ghani or not.

Then again, the return of Gen. Dostum ended the hopes that had emerged for Ghani’s struggle against strongmen and warlords. Moreover, Gen. Dostum told the media after his return that he would talk to the President about Nizamuddin Qaisari’s release, and if refused, he once again would return to Turkey. Considering these remarks, it is very likely that Qaisari; detained on allegations of abusing power and leading illegally armed men, will be released as a result of the pressure placed on government.

On the other hand, Ahmad Ishchi, in an interview with BBC, said that his case will be resolved through the Jirga [local gathering of elders], which points to the fact that a case which caused de facto exile of the First Vice-President for 14 months and was still undergoing judicial investigation is ultimately to be resolved through a Jirga; which could be considered as a form of disregard for the judiciary. The result could mean a loss of trust and regard for these structures in the eyes of the Afghan population.