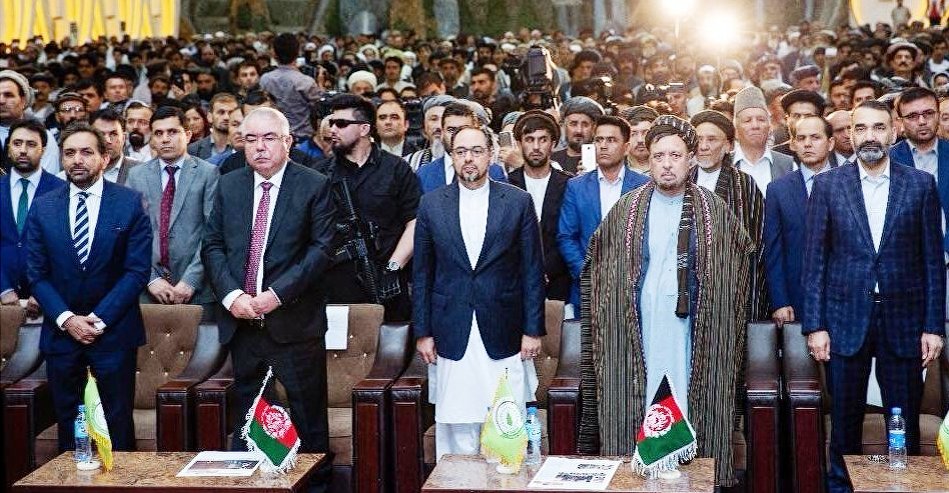 The Executive Head of Jamiat-e Islami Party, Atta Mohammad Noor, during the ceremony held for announcing the formation of the coalition, accused the National Unity Government (NUG) of lack of program/policy, and mismanagement. He added that suppressing well-known persons and releasing criminals under the banner of a peace process will lead the country into precipice, and that it has brought the rule of law under question.

The press release by the Presidential Palace, however, welcomed the formation of the political coalitions and added that the President of Afghanistan will meet its members in the  near future, hoping to have discussions with them on national issues. It also emphasized however, that patience, breadth and positive competitiveness is required for political development.

The term “opposition” means antagonism, resistance and confrontation, and in its broader meaning, opposition is the efforts made by parties and political streams to achieve the goals that are in contrary with the objectives of those having political power in a state.

Opposition and formation of political coalitions is a principle of governance in democratic societies. The opposition and collations observe the government’s performance and policies closely, keeping check on proper functioning through criticism of the government in power. Apart from the Western democratic principle, In Islam; observing the performance of the governing system and criticizing it, is considered the best form of struggle, and is an ethical responsibility of every individual in the society. For this reason, the role of the opposition is welcomed in all democratic societies, in order to push  government leading to improved functioning and efficiency.

Based on the Constitution, all governments with Parliamentary System have officially permitted opposition parties in the country. In such countries, a group is formed in the Parliament that does not support the government, while still respecting and remaining committed to the constitution. In these countries, the opposition can participate in the law-making discussions of the Parliament, as prescribed in the law, in order to observe the government’s performance directly and inform the public opinion on developments at national and international level.

In underdeveloped countries like Afghanistan, the opposition is often referred to as opponents who seek to overthrow the governmental system of that society. These groups are often supported by hegemonic powers of the world using politics, propaganda and financial means.

In the last one and a half decade, Afghanistan has witnessed several political coalitions and opposition groups that, to a large extent, were being formed at the time close to Parliamentary or Presidential Elections. These coalitions were opposing the government politically and were criticizing its work.

Although, after 2001 and the establishment of a new system in Afghanistan, it was hoped that Afghanistan’s political leaders and elites, after all the years of mistakes and slip-ups, would finally have attained political maturity and growth, and would see the forming of coalition with others in their interest; however, these coalitions, frequently or after each election runoff, collapse from the inside, with many of its  members leaving the coalition seeking seats in the government.

Generally, the coalitions that have been formed against the Afghan government in the past one and a half decade have always criticized the government policies and proposed alternatives without having serious or continuous attention to it. They have tried to change the overall system, without taking the public good into consideration, and without having any practical and alternative proposal.

Members of the coalition harshly criticized the government (NUG) work during the announcement of their existence. A member of the coalition, Atta Mohammad Noor said that “the current situation in the country is concerning, ethnic separation; attempts to eliminate others and domineering have brought Afghanistan closer to the precipice of collapse”.

On the other hand, Mohammad Mohaqqiq, another member of the coalition, in his speech, asked the government to accept the electoral proposal of the political parties in which it proposes to change the system of non-transferable united voting system to a transferable unit voting system – and warned that “if not complied, it [the government] should expect the pressure of civil movements of the parties”.

Nevertheless, considering the form of establishment of the coalition and interactions between the individuals related to different parties and temporary coalitions, it seems that the “Great National Coalition of Afghanistan” will once again, not be able to hold on to its unity and solidarity, and thus, will have a short life. The possibilities of the collapse of the “Great National Coalition of Afghanistan” are discussed in the following four points:

Firstly; the parties and political movements that are active in Afghan politics have not had significant achievements in the last seventeen years. When it comes to on the one hand empowering its own internal solidarity, and on the other hand, providing proper responses to the political interactions and issues in the country, as a political party and in accordance with political principles of the party, these movements have failed. For example, Mohammad Mohaqqiq of the Hizbe Wahdate Islami Party stood on the side of Dr. Abdullah Abdullah of Jamiate Islami Party during the 2014 Presidential Elections; however, Ismail Khan from Jamiate Islami Party, instead of standing on the side of a member of his party, stood on the side of Abdul Rab Rasool Sayyaf of the Dawate Islami Party. Therefore, when a party is not able to achieve solidarity among its own members, how could it be possible for a multi-party coalition to have solidarity and unity?

Thirdly; similar to previous coalitions, there are some individuals in the coalition that have joined it just as they have lost their positions in the country and thus, want to enter the power game with a new figure. These individuals are committed to the coalition till the day they once again attain a seat or position in the government, after which they would immediately leave the coalition.

Fourthly; the individuals from Mafia groups that see their business and future at risk also try to join the political coalitions. They, through this means, try to put pressure on the government in order to decrease the governmental pressure on them in return. Such people stay in the coalitions until they achieve their objectives, after which they leave.

Also, considering the condition of coalitions in the past years and the timing in which they form being dates usually close to the Presidential Elections, it seems that such coalitions are often based on personal interests of politicians and/or attaining power and position in the political field, and not for the sake of national interests, rule of law, and reforms in the system.