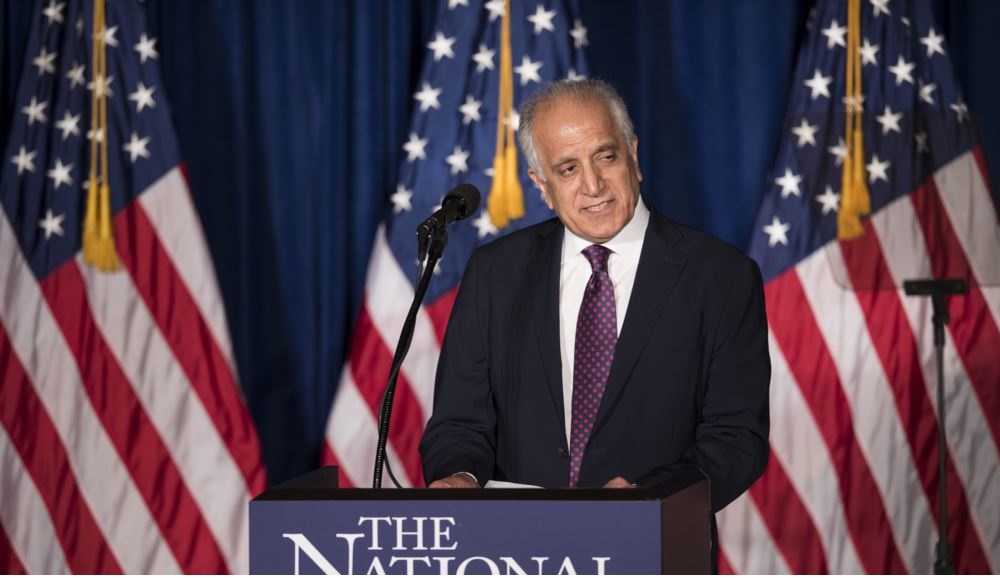 Since the last forty years, Zalmay Khalilzad has been a prominent figure in the Afghan-U.S. ties. Last week, Reuters sourcing two U.S. officials, reported that it was likely the U.S. government would place Zalmay Khalilzad as its special envoy to Afghanistan.

The rumors on Zalmay Khalilzad’s appointment as the special U.S. envoy to Afghanistan comes at a time when after the Ghazni War, the Kabul-Islamabad ties, despite many trust-building efforts, are once again facing strained relations. Despite the fact that peace talks are being pursued more than any other time, its fate remains uncertain and a lot of questions have been raised regarding the new U.S. War strategy, considering the current security situation in Afghanistan.

The following topics are discussed here:

Khalilzad: From Afghanistan to White House

Afghan-born American, Zalmay Khalilzad was born in Balkh province. His father is related to Pashtuns of Laghman province. Khalilzad immigrated to America while he was a young man later receiving citizenship of the country. He received his bachelor’s and Master’s degree from American University of Beirut in Lebanon and PhD degree from Chicago University of the United States of America.

For the past forty years, Zalmay Khalilzad has performed duties in different governmental positions in the U.S and is known to be an important figure of the inner circle of Republican foreign policy. The Afghan-born American had an important role in the U.S. campaign on Afghanistan after 9/11, and had completely cooperated with President Bush on preparing the attack plan on Afghanistan, whereas the U.S., eventually attacked Afghanistan for the sake of the elimination of Al Qaeda and collapse of the Taliban regime, which was founded on the base of 17 years of bloody war in Afghanistan.

The rumors on Zalmay Khalilzad’s appointment as the U.S. Special Envoy to Afghanistan comes at a time when the commander of U.S. forces in Afghanistan admits to the deadlock in the ongoing war in Afghanistan. The U.S. government has understood that it cannot win the Afghan war through military pressure, and thus, has recently chosen to have direct talks with the Taliban.

The U.S war of Afghanistan is a legacy of Bush and Obama for Donald Trump. Trump was initially critical of the U.S. strategy in Afghanistan; however, his stance soon changed once he took office, insisting on the continuation of war.

On August 22 2017, President Trump announced his strategy for Afghanistan and South Asia where he declared a continuation of war with a goal of winning the war through increasing the number of troops; however, a year later, the Afghan security situation has deteriorated more than ever. Based on a recent report by SIGAR, the area captured and controlled by the Taliban has increased in Afghanistan.

On the other hand, not only has the Trump strategy caused an empowerment of anti-war sentiment, but it has also caused an emergence of concerns of a number of countries like China, Russia, Iran, Pakistan and Central Asia and thus, some of them, have increased their diplomatic ties with the Taliban.

Considering the current situation, the U.S is in the process of making efforts to take the Afghan war out of the current deadlock. In this context, Khalilzad being an Afghan-born American politician having adequate information on Afghan culture, social life, and politics and on the other hand having significant experience of advising four U.S. administrations, is why the U.S. might be optimist to appoint him as special envoy to Afghanistan.

U.S. Secretary of State Mike Pompeo is expected to tap Zalmay Khalilzad as his special envoy on Afghanistan, according to reports. The following points are worth noting when it comes to the impact of Khalilzad’s appointments in current situations:

Zalmay Khalilzad is a U.S politician that has always criticized Pakistan’s policies. Khalilzad believes that the entire number of groups fighting against the Afghan government have ties with Pakistan. Two years ago, the BBC  reported him as saying “Pakistan backs terrorists and thus the United States should stop its military and financial aid to Pakistan in order to pressurize them to discontinue supporting terrorists”.

With the arrival of Zalmay Khalilzad, efforts to increase the U.S. and other Western countries’ pressure on Pakistan would follow, which would cause the country to put pressure on elements in Afghanistan who are anti-government and to improve its ties with Afghanistan for the sake of decreasing international pressures on itself.

Zalmay Khalilzad is a person who played a key role in strengthening the central government in Afghanistan after 2001. At that time, he had a role in weakening a number of strongmen and groups who had established power islands in their areas, and were making efforts to gain more power in the central government.

Presently, Afghanistan once again faces political instability while numerous anti-government coalitions are being formed in the last two years. Recently, the coalitions have proved to be a big concern for the Afghan government and have filled the electron process with barriers and postponements. They have tried to establish an interim government through inviting a Loya Jirga (Grand Gathering of Afghans) to replace the central government. The arrival of Zalmay Khalilzad at such a time would cause the anti-government coalitions to diffuse and for the central government to take a breath of relaxation.

Ever since the Bonn Conference took place, the U.S. has always played a noteworthy role in the electoral process of Afghanistan. Less than a year is left for the termination of term of the National Unity Government (NUG) and the Presidential Elections have been planned to be held on April 20, 2019. With the appointment of Zalmay Khalilzad as its special envoy to Afghanistan, the U.S. will once again try to impact the Presidential Elections; however, the question remains who Zalmay Khalilzad would back in these elections.

Taking a glance at the past few years, Zalmay Khalilzad has always supported the central government in political disputes throughout the term of the National Unity Government (NUG). During the dispute between President Ghani and former Balkh province Atta Mohammad Noor, Zalmay Khalilzad warned Atta Mohammad Noor that neither do the Afghan government and its international partners have patience against him nor do they want the continuation of the problem. When Kandahar Police Chief, Gen. Abdul Razeq made anti-government remarks, Khalilzad was quick to say that: “if efforts are made to establish feudalism in Kandahar, the world will not remain impartial and silent”. The signing of the Bilateral Security Agreement (BSA) with the United States and calling the Trump Strategy on Afghanistan and South Asia (with all of its problems and failures) “effective” by President Ghani show the closeness of President Ghani and the U.S. government.

Taking the above mentioned reasons into consideration, there are predictions that the Khalilzad mission will have a great impact on the upcoming elections. For now, political parties and former strongmen have, to some extent, challenged the upcoming Parliamentary Elections. The failure or postponement of these elections will further deepen the legitimacy crisis in Afghanistan on the one hand, while on the other hand, they will definitely have an impact on Presidential Elections as well. Therefore, the cancellation or postponement of the election was accepted neither by the Afghan government nor to the International Community. With the arrival of Khalilzad, efforts will be made to eliminate the existing barriers before the Parliamentary Elections. Besides that, it is predicted that Khalilzad might not support the present political opposition of President Ghani and former strongmen in the upcoming Presidential Elections. End