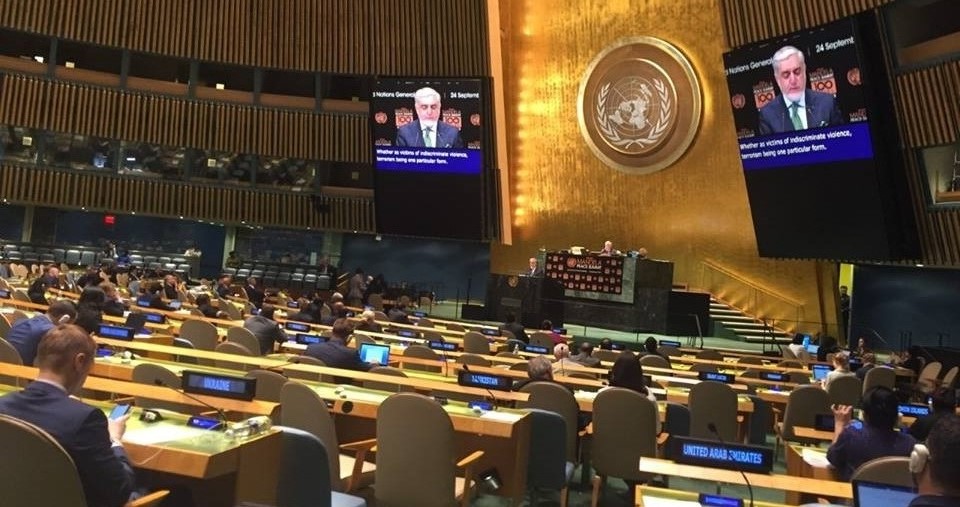 Last week, the 73rd meeting of United Nations Generally Assembly was hosted in New York, where Dr. Abdullah Abdullah, Chief Executive of Afghanistan, heading a senior delegation along with other leaders participated in it.

The UN member countries’ leaders and their representatives held meetings with each other and discussed global issues. On the second day of the meeting, Dr. Abdullah addressed the UNGA and stressed regional cooperation for the sake of peace and stability. He asked neighboring countries, especially Pakistan, to help Afghanistan target terrorists and eliminate their safe havens.

Challenges are growing outwardly and world order is increasingly chaotic said António Guterres in his opening address to the 73rd UNGA. He also added that trust is at a breaking point and that trust in national institutions,  trust among states, trust in the rules-based global order is lacking. He pointed out divisions in the Security Council too.

The following topics are discussed in the analysis: UN role in the Afghan issue, participation of Dr. Abdullah in UNGA and what happened there.

The United Nations (UN) was established after WWII by 51 countries in 1945 and Afghanistan became its official member in 1946. There were 193 member countries in UN in 2006; however, Taiwan and Vatican are two states that are yet to receive membership of UN.

In 1979, the UN objected to the Soviet Union (USSR) attack on Afghanistan through issuing a resolution and considering the invasion of USSR, initiated their activities there. The Geneva Agreement that was signed in 1988 paving the way for withdrawal of Red Army forces from Afghanistan was also a result of UN efforts.

UN made efforts to prevent civil war in Afghanistan after the withdrawal of Soviet Union troops from Afghanistan; however, its efforts were fruitless. During the Taliban regime, it tried to pave the way for negotiations between Northern Coalition and Taliban; however, these efforts also had no positive outcomes.

The UN extended its activities in Afghanistan after the Taliban regime collapsed in 2001 and the new system was established through US cooperation. From establishing an administrative system to holding Loya Jirga, the UN carried out different missions; however, 17 years later, Afghanistan still faces political, economic and security instability. Thus considering the mission and activities of the organization, the role of UN in the Afghan issue attracts reproval.

As Chief Executive of Afghanistan attended the 73rd UNGA instead of President Ghani, speculation emerged of strains in ties between President Ghani and the Trump Administration.

Although the Presidential Palace termed these speculations “baseless”; the fact that President Trump did not even mention Afghanistan in his address to the UNGA give reason for such doubts to remain.

The 17-years of US war in Afghanistan has led to a kind of ambiguity and failure currently. The U.S has tried different strategies for winning the war it has initiated in Afghanistan in 2001; yet the only achievement seems to be the persistence of war.

Though the U.S aided in billions of dollars for the purpose of building a new governmental system in Afghanistan; the country still faces political, economic and security instability and is ranked at the top of world’s most corrupt countries.

Taking the situation into consideration, Donald Trump had recently appointed Zalmay Khalilzad as his special envoy to Afghanistan in order to find a way out of the current ambiguous situation in Afghanistan. Most analysts believe that the Trump Administration is unsatisfied with the National Unity Government (NUG) performance. Since the situation has deteriorated and a number of political parties, former governmental officials and Afghan National Assembly emphasize a reviewing of the security agreement (BSA) signed with the United States, it is likely that Trump  refusing to  meet Afghan leaders is due to the ambiguity in the Afghan situation and the fact that they have not provided a clear picture and strategy on the situation in Afghanistan to Trump either.

What Happened at the 73rd UNGA?

The US President Trump address to the 73rd UN General Assembly was the headlines of many media channels. He called Iran a country which has planted the seed of killing, chaos and terrorist actions throughout the Middle East and that neither respects its neighbors borders nor the national sovereignty of the other countries.

In the UN Security Council, Donald Trump also accused Iran and Russia of being involved in genocide of the Syrian people. He also criticized China and said that it interferes in the upcoming Presidential Elections in order to prevent Republicans from achieving success. Trump also said that he is the first American President who has challenged China when it comes to trade.

The latest situation of Syria, Yemen and Palestine was also discussed in the UNGA and the only close-to-negative issue in the UNGA was the lack of mentioning Afghanistan by Donald Trump in his address to the General Assembly.

Chief Executive of Afghanistan, Dr. Abdullah, however, addressed the UN General Assembly on its second day. However, there was nothing important in his speech to be able to bring the attention of the world to the Afghan issue. He stressed on peace from the perspective which shows the weak intention of Afghan government for making peace with the armed opposition. His remarks did not contain important points to grab the world’s attention in regional issues either.

Chief Executive of Afghanistan, Dr. Abdullah had a meeting with Iranian President, Hassan Rouhani on the sidelines of the 73rd UNGA where both leaders stressed on joint efforts against terrorism. Rouhani asked for finalization of Tehran-Kabul Comprehensive Agreement and said that his country is ready to open the Chabahar Port for use and extend the Railway to Afghan border.

Dr. Abdullah also met the UN Secretary-General and assured him that transparent and reliable elections would be held through using the biometric system. In return, the UN Secretary-General also stressed that using the biometric system for the purpose of transparent and reliable elections will help in stability of Afghanistan. In the meeting, he also said that there are no changes seen in Pakistan’s policies on efforts against terrorism and emphasized that the only way to get out of current problems is authentic cooperation between Afghanistan and Pakistan. the UN Secretary-General assured Dr. Abdullah of full cooperation and said that our purpose is to have peace and stability maintained in Afghanistan.

Chief Executive of Afghanistan also met the US Deputy Foreign Security for Central and South Asia where they talked about peace talks in Afghanistan, Afghanistan regional ties, security situation there and other important issues.

Overall, Chief Executive of Afghanistan met premiers of Denmark and Belgium and promise of extension of ties between both sides was .