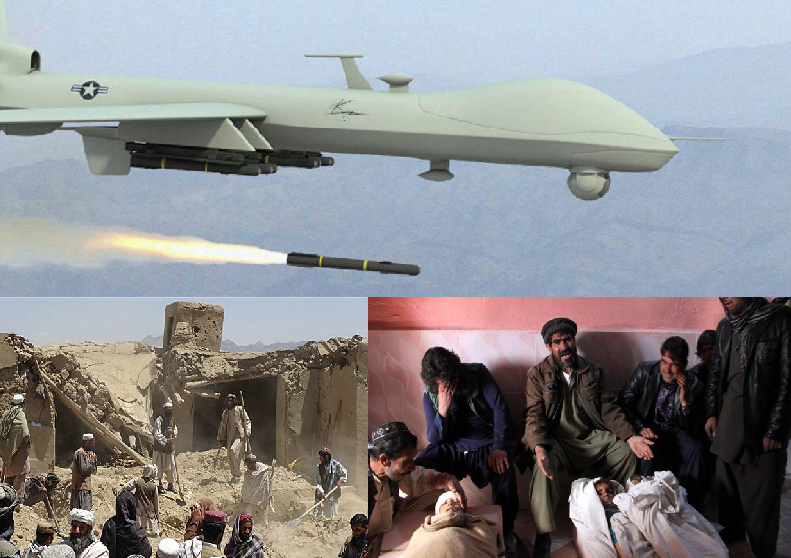 Since 17 years, the Afghan war has targeted civilians by parties involved in the war resulting  in the death and injury of tens of thousands of Afghans.

Although these attacks were condemned and even called a “Crime against Humanity” by former President Karzai, Hizbe Islami Party leader, Gulbuddin Hekmatyar, a number of Parliament members and the public, the Ministry of Defense is yet to condemn the Jaghato tragedy. It has said that it will appoint a delegation to investigate the Tagab case.

The Afghan government denies the civilian casualties in Jaghato district of Maidan Wardak provinces while the United Nations Assistance Mission in Afghanistan (UNAMA), through publishing a statement, has confirmed that 11 children and a woman belonging to one family have been killed in the Jaghato incident.

Increase in air strikes of foreign forces is no doubt a part of the new military strategy of Trump for Afghanistan that has achieved no result other than increase in civilian casualties and severity of war.

The consequences of lack of attention to the lives of civilians in the war is reflected in the frequent targeting of civilian homes in air strikes and the silence of the government and international community against the killing of civilians.

After the US troops and coalition forces initiated the current war in 2001. 17 years have passed and till today none of the parties involved in the ongoing war have shown concern for the lives of civilians.

Civilians are killed and wounded in deadly attacks and explosions of armed opposition of the government on the one hand, and on the other hand, they are targeted by operations of Afghan and foreign forces. During the last 17 years, the parties involved in the war have always targeted civilians and have shown disregard for civilians’ lives.

In recent years, particularly after the new US strategy was announced for Afghanistan, the military strategy of the country focused on more air strikes and night raids than before.

On the other hand, the Taliban changed their war strategy carrying out aggressive attacks and assaults on Afghan big cities in the form of large groups. Moreover, the Daesh group has also carried out suicide attacks and deadly explosions in different parts of the country, each of them resulting in increase in civilian casualties.

The parties involved in the Afghan war, while targeting their enemy take the lives of  countless civilians as well, and that is why every war causes more civilian casualties. For now, the Afghan situation is severe and Afghans do not feel secure in cities or in villages. They are not safe from the armed opposition’s attack and explosions in cities and Afghan and foreign forces’ night raids and blind air strikes. These are realities that has made life for Afghan people hard.

Apparently, the foreign forces abandoned the battlefield after 2014 and signaling of Kabul-Washington security agreement; however, their bombardment still continues and has infact increased after the announcement of the new military strategy of Trump for Afghanistan, which in most cases targeted civilians. Based on reports, the US has carried out 2611 air strikes in 2017; while the number was 1071 in 2016 and only 236 in 2015.

Although there are no accurate dates on foreign forces or joint forces’ air strikes in 2018; the Taliban started to carry aggressive attacks recently. It is likely that Afghan and foreign forces use air strikes for defense purposes. Thus air strikes may further increase in the Afghan war; but regarding the civilian casualties caused by air strikes, UNAMA reports that 5122 civilians were killed and injured in the first six months of 2018 of whom 7 per cent (149 killed and 204 injured) were due to air strikes of foreign and Afghan forces.

The air strikes of foreign forces have always killed civilians and targeted religious schools and civilian homes instead of eliminating the armed opposition. The civilian killings have always been responded to with silence by the international community and head of the Afghan government, and/or sometimes, the foreign forces replies regarding the blood of innocent Afghans are “it was a mistake; Sorry!”.

The homes of civilians have been targeted and their innocent women and children been killed in the 17-year War on Terror “mistakenly” and/or “unintentionally” and the perpetrators have always been forgotten without being punished or trialed.

Continuation and repetition of such strikes will increase distance between people and the government on the one hand; and on the other hand, the action will enflame the harsh reaction and hate of people against the perpetrators of these incidents and will  instigate continuation of war in the country.

As the killing of women and children and, overall, targeting the innocent civilians is an action against human and Islamic principles; therefore, the Afghan government and international community are obligated to take immediate measures against preventing such blind strikes of Afghan and foreign forces.

The Afghan government should follow the recent relentless incidents instead of remaining silent or denying the facts. Besides that, it should also be deeply evaluated how such unyielding attacks could be prevented. Otherwise, treating the latest incidents without seriousness will be counterproductive and help in empowering the ranks of the armed opposition. In brief, the Afghan government is requested to focus on honest peace talks and on how to put an end to the ongoing bloody war, as well as how to prevent countless civilian casualties that occur daily.