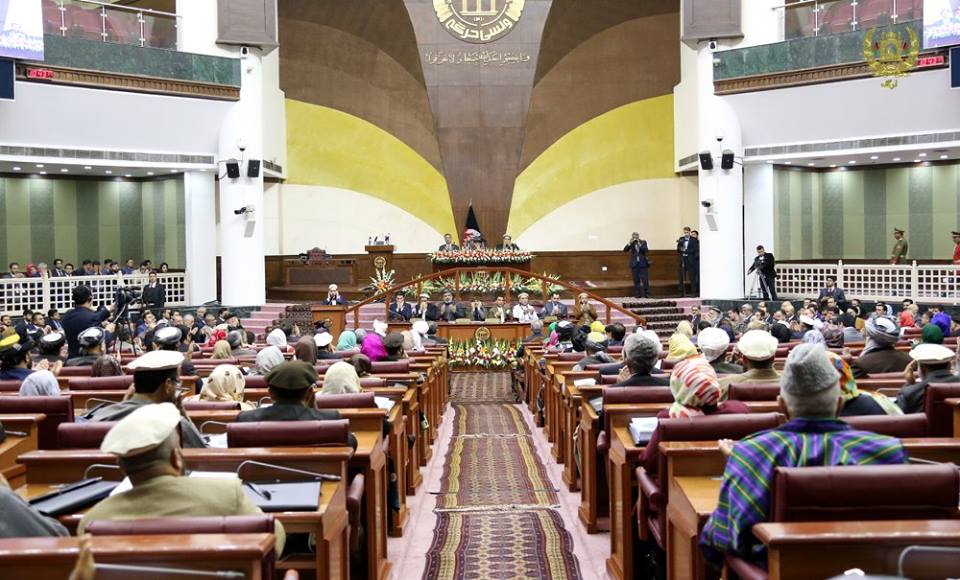 The 16th legislative term of the Wolesi Jirga (Lower House of the Afghan Parliament), despite its legal 5 years, was active for another privileged 3 years. The Parliamentary Elections should have been held three years ago; however, they were suspended till late 20 October, 2018.

Eight million Afghans have been registered for the Parliamentary Elections according to Afghanistan Independent Election Commission (IEC) where votes were casted for almost 2570 candidates in 32 out of all 34 provinces of Afghanistan, except for Kandahar and Ghazni. The initial results of the elections will be announced on November 10 and the final results will be announced on December 20, 2018, according to IEC. Thereafter, the 17th legislative term of the Wolesi Jirga will officially be commenced.

The 16th legislative term of Wolesi Jirga, members of Parliament (MPs) accused with corruption and the disputes among the government and Wolesi Jirga are discussed here.

After the U.S. attack on Afghanistan in 2001 and establishment of the interim government under the leadership of Hamid Karzai in the Bonn Conference, the new Constitution of Afghanistan was also compiled. Parliamentary Elections for the 15th legislative term of the Wolesi Jirga were held in 2005, based on the new Constitution where as a result, 249 MPs were elected for Wolesi Jirga.

During its period, Wolesi Jirga also approved some documents which later were asked to be cancelled. Among them is the Bilateral Security Agreement between Afghanistan and the U.S (BSA). Since the National Unity Government (NUG) signed the BSA promptly with first houses of its government, the Wolesi Jirga also approved it within a short matter of time without conducting discussions about it; but in recent years, as the air bombardment and civilian casualties have increased, Wolesi Jirga and Meshrano Jirga (Upper House of the Afghan Parliament) have raised their voices on reviewing the BSA.

In sum, in its 16th legislative term, Wolesi Jirga had disputes with the executive branch of the state. Also, the absence of MPs and their visits abroad during vacations instead of meeting with their clients were factors that put doubts on the capability of the Wolesi Jirga when it comes to lawmaking, monitoring of governmental activities and honest representativeness of the people. Thus, the dissatisfaction of the public with them is reflected in a survey conducted by Khana-e Azad-e Afghanistan in December 2016 showing that 70% of Afghans are dissatisfied with the work of the Wolesi Jirga.

The rampant corruption within Wolesi Jirga and accusations against MPs was another aspect affecting the 16th legislative term of Wolesi Jirga. Wolesi Jirga was among many other bodies in Afghanistan that had a role in corruption. Even UNAMA harshly criticized the Afghan Parliament for being involved in corruption in its 2018 report titled ‘Afghanistan’s Fight Against Corruption: From Strategies to Implementation’.

The Wolesi Jirga is accused of providing ministers with vote of confidence in return for various privileges, breaking of the law, not observing public order and rules, smuggling, putting pressure on government for their personal jobs and other such cases of corruption.

Former Minister of Information and Culture, Abdul Bari Jihani personally shared the information on the MP’s corruption with the public. In his article, he wrote that he was present in a party of Zahir Qadir on February 2015 where some of the government’s nominated ministers for taking vote of confidence from the Wolesi Jirga were asked to provide each member of the Jirga with $5,000.

Additionally, reports on defalcation of millions of Afghani’s and existence of countless ghost employees were released in September, 2017. Based on these reports, 217 out of 370 employees of the Wolesi Jirga Secretariat were ghosts and about 4 million Afghanis were taken by MPs as a salary for the ghost employees. Meanwhile, the speaker of the Wolesi Jirga was also accused of spending 5 million Afghanis of the official budget on building his private home.

Although a number of MPs reacted towards the corruption of the speaker and asked for further investigation; the latest information of the file and outcomes of the legal investigation on the case are yet to be shared with the public.

Confrontation of Government and Wolesi Jirga

The Afghan Constriction has provided the Wolesi and Meshrano Jirga with the following duties: ratification, modification or abrogation of laws, decision on the development programs as well as the budget, ratification of international treaties and agreements or abrogation of membership of Afghanistan in them, providing the nominated ministers with vote of confidence, decision on elucidation sessions and approval of the state budget as well development program.

The three organs of state, in accordance with the Afghan Constitution, have inseparable ties and all three of them have the right to monitor each other for the purpose of better performance. The Parliament monitors the government activities as it is considered key for continuation and success of the government.

The 16th legislative term of Wolesi Jirga that commenced during the Karzai administration did not have as good relations with the government as it had in its 15th legislative terms. Although the ties between the government and Wolesi Jirga were not that good during the Karzai Administration, the distance between them and lack of coordination was not much. But after the NUG was established, the distance between them became unprecedentedly greater and resulted in disputes.

During the first years of the NUG, Wolesi Jirga criticized the NUG’s foreign policy, especially its peace policy and closeness to Pakistan and its policy of providing it with privileges. Later, some members of the Wolesi Jirga accused the NUG of having a hand in the emergence and expansion of the Daesh group in Afghanistan. Delaying the introducing of minister-nominees to the Wolesi Jirga, rejecting of some minister-nominees by the Wolesi Jirga, not holding the Parliamentary Elections on time and distribution of Electronic Tazkira (ID Cards) were the factors that had caused disputes and distance between the NUG and Wolesi Jirga.