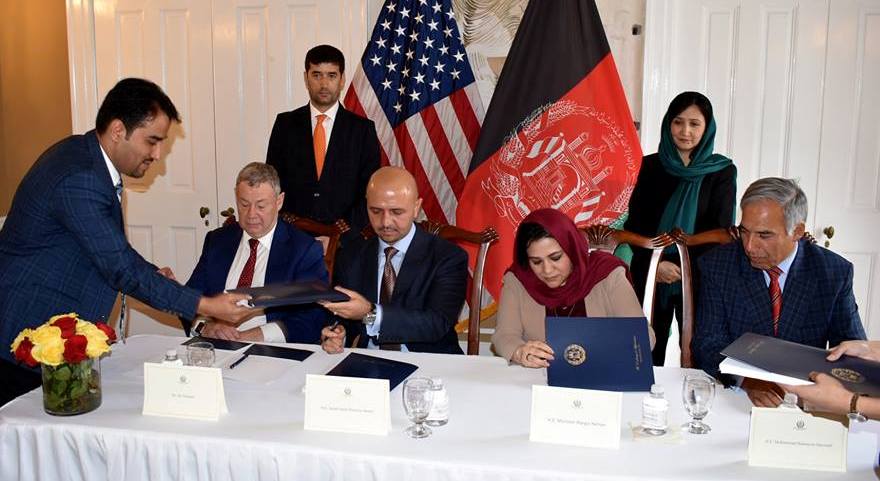 Mines and natural resources are the untapped properties of the country that could lead to economic development, prosperity, security, and stability in the country. Nonetheless, the illegal and unprofessional extraction from mines in Afghanistan has been continuing over the past four decades, and the perpetuation of this situation has negatively affected the country’s economy, revenue, security, etc.

On October 5, 2018, the Afghan government signed two contracts, regarding major gold mines in Badakhshan and a copper mine in Balkhab with British company Centar Ltd. The contract was signed at the Afghan Embassy in Washington D.C where a lot of opposition was faced. Afghan and civil society organizations raised concerns about this project, pointing out that a former government minister is a partner in the venture. A day after the gold and copper contracts were signed, the Integrity Watch Afghanistan (IWA) held a press conference where hundreds of civil society activists were present. They pointed out that the contracts were against the Mining Law of the country and demanded their cancellation.

Besides other issues, IWA considers the partnership of Sadat Mansour Naderi, a businessman who was the Minister for Urban Development and Housing, as apparent contravention of  Afghanistan’s Law on Mining. It has also raised its concerns over the funding of the ongoing war through Afghan mining and alleged that there were discussions between the international community and the Afghan government over the use of mining as the funding source for war in Afghanistan, based on some reports.

Here we have discussed the mineral resources, funding the war through Afghan war, their extraction and how the contracts are granted in the mining sector in the country.

The outcomes of studies conducted in 1890 by British geologists and thereafter Russians, Americans, Germans, and French regarding the Afghan mines reveals significant deposits of oil, gas, coal, silver, copper, lapis lazuli gemstones, and other valuable materials, most of which are untouched yet.

After the U.S campaign on Afghanistan and collapse of the Taliban regime, the 5-year U.S. geological survey (2006-2010) showed that the total value of the mineral resources in Afghanistan is one trillion dollars, while the Afghan government has estimated its value to be three trillion dollars. Overall, 1400 mineral fields have been detected so far in the country.

With mineral resources valuing hundreds of billions of U.S. dollars not so far from the surface and close to its major cities, Afghanistan is one of the distinctive countries in the region. Nevertheless, Afghans are one of the poorest nations in the world; and thus, they cannot use their buried resources due to the ongoing war in the country.

The Funding of the war through mining and smuggling by parties involved in the decades-long war of Afghanistan, especially the commanders in the front lines has been routine.

During the invasion of the former Soviet Union, Afghan gemstones were being unprofessionally extracted and smuggled by commanders and Jihadi leaders in order to fund their war. This continued during the civil war and later during the Taliban regime. Existing information indicates that the war leaders of the Northern Coalition against the Taliban were, to a large extent, extracting the gemstones from the areas they controlled and selling them to others which helped in funding the militants.

Following the U.S. attack on Afghanistan and collapse of the Taliban regime, during the last 17 years of war Afghan mines have been illegally and unprofessionally extracted from and looted by strongmen and irresponsible armed groups. These mined have been depended on as the main funding sources of armed opposition of the Afghan government, based on reports of various national and international bodies.

In the meanwhile, in a report released on June 2016, the international organization of Global Witness has said that the income of armed groups from a single small mine in Badakhshan province is equal to the total revenue of the Afghan government from the mining sector. The institution added that “the competition between the economic mafia over controlling the mines of Badakhshan has created such a diversified coalition which in some occasions have aligned the Taliban, the local commanders of Jamiat-e-Islami, and some senior officials of the Afghan government.”

Moreover, the armed opposition of the government, especially the Taliban and Daesh, unprofessionally extract from the mines in areas out of control of the government and sell them for the purpose of funding their war. Afghanistan Anti-Corruption Network (ACCN) released a report revealing that armed insurgents including the Taliban gained $46 million through illegal extraction of minerals in a mine of Nanagarhar province in 2016.

Overall, war in the areas where mines are located is intentionally perpetuated in order to fund the Afghan war through them or to facilitate the extraction, smuggling and looting from Afghanistan.

Government Capacity for Mine Extractions

Although it was hoped the government would take care of the Afghan mines and their legal and professional extraction, especially after the new system was established in 2001; 17 years have passed and hundreds of millions of dollars have been spent, but reports still indicate that Afghan mines are illegally and unprofessionally extracted from and looted by strongmen and armed groups.

The lack of security and decreased control of Afghan government over the geography of the country has caused an inability of the government to host the required monitoring over the country’s mine. On the other hand, corruption and lack of capacity for professional management coupled with the extraction from Afghan mines by the Ministry of Mines and Petroleum (MOMP) are other reasons that have deprived the country of economic welfare and development as a result of lack of using of its untouched subterranean resources.

During the last 17 years, the Afghan government has signed several contracts with national and international companies for the purpose of extraction of the mines; however, there were always concerns on the issue due to lack of transparency in the signing of contracts and lack of appropriate monitoring of the practical extractive operations. For example, a major contract of Logar’s Aynak Copper was granted to a Chinese company named MCC by the MOMP in 2008; however, its practical operations are yet to be commenced.

The contracts on Badakhshan’s gold and Balkhab’s copper mines were put for bidding in 2012 and two companies namely Turkish Afghan Mining and Afghan Gold & Minerals won the bidding; however, the MOMP said they had legal problems and there were conflict of interests at that time. The contract has been suspended since 8 years; however, it was granted to a company in Afghanistan’s embassy in Washington a while ago, on October 5, 2018.

The contracts are for thirty years, according to MOMP. The first three years will be for exploration where the Turkish Afghan Mining will invest $22 million on the gold mine of Badakhshan and Afghan Gold & Minerals will invest $56 million on the cooper mine of Balkhab located in Saripul Province.

Meanwhile, there are accusations that the contracts are against the Afghan Law on Mining. Reasons are listed as follows:

First; the overall worth of every contracted mine is unclear.

Second; the partnership of Sadat Mansour Naderi, a businessman who was the Minister for Urban Development and Housing is an apparent contravention of the Afghanistan’s Law on Mining. As article 16 of the 2014 Afghan mining law sets a five-year time limit before a Minister, President, Vice Presidents, members of Parliament (MPs) and other senior government officials or their direct relatives are allowed to hold a mining contract.

Third; decrease in Royalty (a financial obligation payable by a License or Authorization Holder or contractor to the State) of contracts from 11 to 8 and from 10 to 6 took effect. The IWA alleges that it happened while Mansour Naderi was performing duty as the Minister for Urban Development and Housing of the Afghan cabinet.

Fourth; lack of financial guarantees from the contracted companies of mining.

What should be done?

Work for establishing effective strategies for preventing corruption and increasing capacity building in the Afghan mine sector are among the important points regarding managing the natural resources of Afghanistan. The following points are worth mentioning: